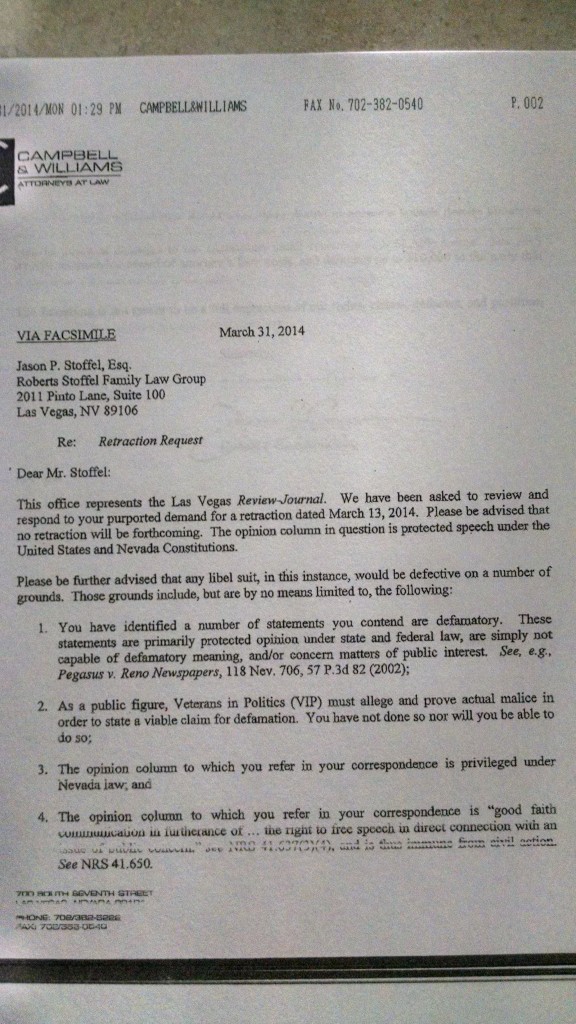 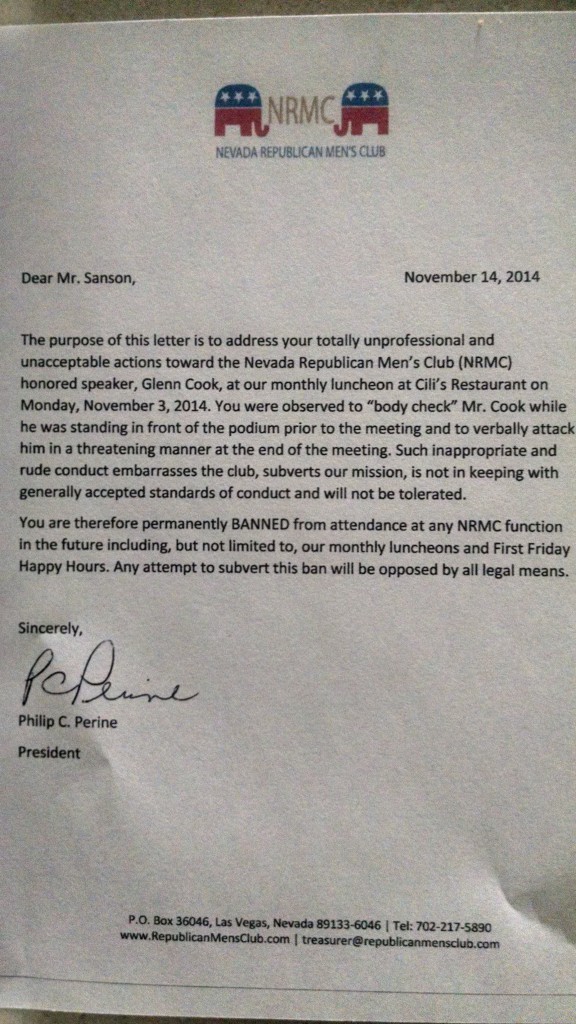 One witness to the incident, Joe Lombardo, Assistant Sheriff, had to escort a visibly angry – and hostile – Cook to his car after the meeting concluded. No mention of this altercation between Cook and Sanson occurred, until Philip Perine, President of the Nevada Republican Men’s Club issued a letter to Sanson via email to permanently “ban” him from attending future meetings and events of the Club (see attached).

According to bylaws of the Nevada Republican Men’s Club in Section 2 of Article III:

“…membership of any person cannot be denied and a member cannot be removed, unless it is approved by the Board of Directors.”
– http://www.republicanmensclub.com/nrmc-bylaws201301.pdf

More importantly, the bylaws do not address “banning” a member and/or an attendee from meetings. Besides being a clear violation of the Nevada Republican Men’s Club bylaws, Perine’s actions also violates the First Amendment of US Constitution and Article 1 Section 9 of the Nevada Constitution, the same amendment Glenn Cook hides behind when spewing vilifications in his so called “opinion page”.

On March 13, 2014, per the request of VIPI, Jason Stoffel, Esq. requested a retraction from the RJ for Cook’s column slandering Sanson and the Veterans In Politics group, as the content was libelous, in deformation, and slanderous.

On March 31, 2014, per the request of the RJ, Donald J. Campbell, Esq. responded a-la-Nancy Pelosi that Glenn Cook and the RJ can publish anything, regardless of its truthfulness and even untruthfulness is protected speech under the US and Nevada Constitution (see attached).

It seems Campbell, Cook and the RJ do not live in accordance with Corinthian 6:12-20:

Just because it is legal doesn’t make it right.

Such attitudes has one wonder how many other untruths, falsehoods, defamations, and fabrications fill the opinion columns each day in the RJ.

Sanson has been an affiliated in good standing with the Republican Men’s Club since 2003 and has been president of Veterans In Politics International since 2005. It seems Glenn Cook and Republican Men’s Club President Philip C. Perine have chosen to follow the strategy used by the disgraced Erik Holder by choosing to follow the US Constitution only when it serves their own self-interest.

To date the Nevada Republican Men’s Club has failed to inform Sanson of a planned future Board Meeting for the purpose of addressing his alleged actions towards LVRJ reporter Glenn Cook during a meeting on November 3, 2014; disregarding the principle of due process as well.

Does not Steve Sanson and the Veteran’s In Politics International group have the same rights the Nevada Republican Men’s Club and their party platform claim to protect?