Jailed for the Holidays: Vets in Prison

You are here: Home / News / Jailed for the Holidays: Vets in Prison

Jailed for the Holidays: Vets in Prison 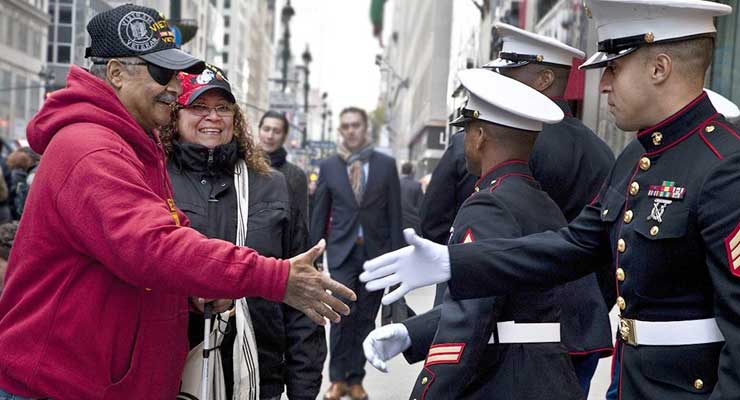 The headlines can be read every day of the year all across America:

29 year old Iraq war veteran arrested in Oklahoma on aggravated assault and armed robbery; neighbor says: “It was obvious he was struggling and trying to get help through the system”

50 year old ex-Navy Seal arrested after barricading himself in his home and yelling threats; police and SWAT made arrest after 3-hour stand off

26 year old Army sergeant who had been turned away by the Kansas City (Missouri) Veterans Affairs Hospital when he sought treatment for nightmares, post traumatic stress and traumatic brain injury was shot and killed by police after he pointed an AK-47 at them

About 700,000 veterans are involved in the U.S. criminal justice system. As we go about our holiday plans, let us remember that official numbers show 181,500 veterans will spend their holidays in jail or prison. This represents a small decrease in the number of incarcerated veterans since 2004 which some attribute to the aging of all veterans and recent increases in services for returning veterans – many services provided by veterans groups as opposed to the formal Department of Veterans Affairs (VA) system.

Still, over 180,000 incarcerated veterans and 22 veteran suicides per day is a blemish on the federal departments and agencies that are supposed to provide for our veterans. What do we know of these men (99 pecent) and women (1 percent) who have served our nation? Both combat and non-combat veterans in prison and jails experience more mental health issues than non-veterans.

About one in four veterans (26 percent) deployed in Iraq and Afghanistan have combat-related mental health issues including post traumatic stress disorder (PTSD) and traumatic brain injury (TBI) stemming from the blast waves of Improvised Explosive Devices (IEDs). PTSD and TBI are the signature injuries of the Iraq and Afghanistan wars. About 11 percent of those who saw combat in Afghanistan and 16 percent of those in Iraq have mental health conditions; up to 30 percent have at least mild brain injuries due to the blast wave of explosions.

The difficulty for veterans their families and friends are twofold. First, these injuries are not easily recognized; researchers and clinicians now refer them as the invisible wounds of war.

Secondly, the current VA healthcare system is poorly organized, woefully understaffed, seriously underfunded and shamefully unable to fully address these problems. Over 100 VA facilities are now under criminal investigation for a range of offenses including “secret waiting lists,” manipulation of records, negligence and overmedication. Nothing short of an honest and comprehensive plan with strict accountability and significant input from veterans will put the VA on the path toward effectiveness.

Thankfully, a new model has emerged along with a growing set of best practices that address health and mental health issues at least for those veterans who end up in jail or prison. Veterans Treatment Courts are led by judges that only see veterans and are supported by cross-disciplinary teams that include health and mental health professionals along with experts in veterans benefits and services. These courts are similar to Drug Courts, Mental Health Courts and Family Courts that divert offenders from the criminal justice system. They all have the same basic characteristics: special dockets that offer a range of mandatory services with support from a multidisciplinary team. Veterans Courts have the added feature of a network of veteran mentors and coaches.

Most importantly, these courts work. A recent study showed that 89.5 percent of participants in Veterans Treatment Courts turned their lives and did not re-offend. This is a remarkable drop in recidivism (re-arrests) that can be adapted across a wide range of court-involved people of all ages.
The model is not a “get out of jail free” pass. The Veterans Treatment Courts provide a structured approach and focus on those with diagnosed substance abuse or mental health disorders.

Requirements always include regular appearances in court in front of the presiding judge to talk about progress and challenges; mental health treatment or addiction counseling; regular and random drug and alcohol testing; and, often, streamlined access to veterans benefits.

The “veterans only” docket allows judges to specialize and to deeply understanding the specific pressures on soldiers and veterans – especially regarding combat stress, traumatic brain injury and sexual assault in the military. The judges see first hand how these conditions when untreated lead to self-medication and substance abuse, then addiction and then illegal or aggressive behavior that leads to jail or prison.

A spectacular characteristic of most Veterans Treatment Courts is the involvement of local veterans as trained mentors. The Veterans Courts stand out as a model that has mobilized the entire veteran community and channels the power of peer counseling and the bonding of those who have served our nation in uniform. Peer mentors and coaches playing a significant role in the healing and learning process of the justice-involved veteran.

Judge Robert Russell established the first Veterans Treatment Court in Buffalo, New York in 2008. There are now 220 such Courts in the country with some funding provided by the VA; organizations such as Justice for Vets are actively supporting the current federal budget request of $100 million for specialized courts including Veteran Treatment Courts.

The number of veterans in treatment programs is nonetheless a small fraction of the number of veterans behind bars and this reality is a direct consequence of a compromised VA system. A 2014 survey of veterans found more than 73% did not believe soldiers and veterans are getting the care they need and only 57% of new veterans even register for VA health care.

There are three immediate lessons to be learned here:

A full range of services, benefits, mentors and new opportunities can turn lives around. The first lesson is that a structured “services and treatment model” combined with consistent mentoring works. The model of Veterans Treatment Courts should be adopted nationwide for the majority of veterans who enter the criminal justice system.

The second lesson is that a structured “services and treatment model” combined with consistent mentoring model would work for all troubled veterans who seek services from the formal VA system or from veteran-based support groups. The entire VA system should adopt this model and fund all courts and neighborhood-based organizations that provide such a range of services.

As America considers ways to reduce incarceration and support those who are diverted away or released from the criminal justice system, the “services and treatment model” combined with consistent mentoring should be adapted and funded nationwide. Data shows incarceration costs decrease as re-arrests go down and lives are turned around; this proven approach should be taken to national scale.

Veteran Treatment Courts are an important part of a broader approach to support troubled veterans. In 48 states “Veteran” can be designated on driver’s licenses (California and Washington state efforts are in progress). Military leaders and law enforcement at all levels need to recognize the symptoms of combat stress including insomnia, depression, panic attacks and flashes of violent anger. We must all recognize that asking for help is a sign of strength and an act of courage. Feeling bad about what you did or saw in combat is not a personality disorder or a discipline problem; it is a normal reaction to an impossible task.

The missing element of a treatment approach to veterans involved in the criminal justice system is that We the American People do not really understand what service and warfare means in the 21st century. We do not understand the true costs of war and we cling to the fantasy that combat is morally safe.

A new concept regarding combat trauma takes a broader view: moral injury is the ethical damage done when we train our sons and daughters to kill others and deploy them to ambiguous combat situations. Moral injury is not the trauma of violent events or post-traumatic stress disorder. It is the psychological damage done when we as a nation force our soldiers to violate the code of ethics by which we raise our children and then as a nation distance ourselves from the realities of warfare.

Dr. Jonathan Shay, a Boston psychiatrist, coined the term moral injury to consider the psychological damage that occurs when battleground actions conflict with a soldier’s internal moral code. Shay opposes the term “post-traumatic stress disorder (PTSD) believing that combat stress is not a disorder or psychiatric illness. Psychological trauma in battle is an injury with a range of symptoms. Rita Nakashima Brock at the Soul Repair Center at Brite Divinity School in Fort Worth, Texas furthers this work by developing clinical and faith-based approaches to helping traumatized veterans.

From the perspective of moral injury, we as a nation do great damage when we refuse to consider the widespread destruction and ethical conflicts of warfare. This will only change when political and military leaders are more honest about the true hazards of war and the unintended consequences of our foreign policies.

Many have written that Native American traditions for welcoming home warriors from battle go deeper than traditional Western in understanding the trauma of warfare and the healing powers of community. There is much we can learn from these traditions and ceremonies for healing the warrior’s heart. The most important component of Native American ceremonies for returning soldiers and especially wounded warriors is that the whole tribe would listen to the stories of what had happened in battle. They would share in the burden of that knowledge, and communicate that what happened to you happened to all of us.

So as we enjoy our holidays, let us reflect on our incarcerated and traumatized veterans and how We the American People may better understand the burdens of combat and the moral costs of warfare. Maybe then we can decide whether our government Of the People will embark on Forever War or an Age of Peacebuilding. 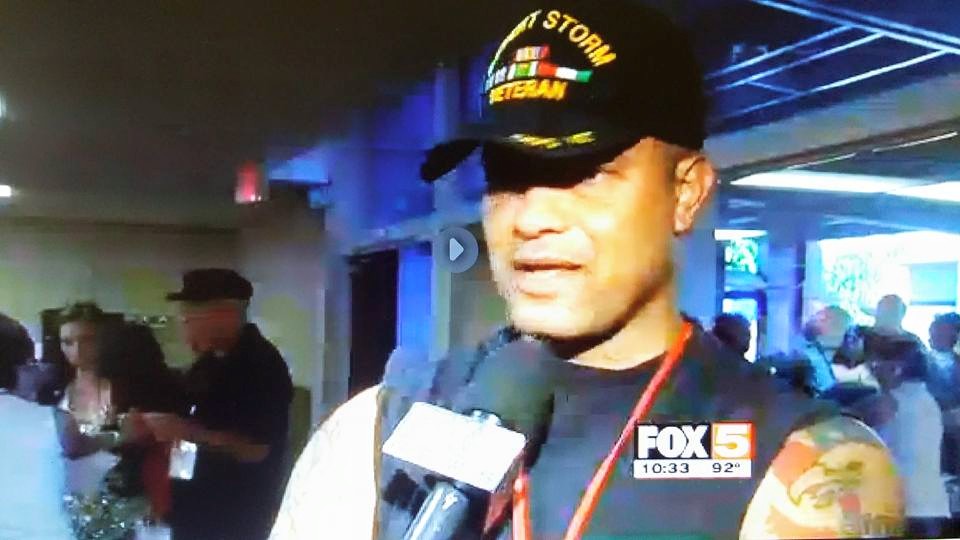 Steve Sanson’s strong commitment to his country and his community has been demonstrated through his leadership and service in the United States Marine Corps in Saudi Arabia during Desert Storm. Sanson is the President of Veterans In Politics International, a non-partisan group that endorses candidates to elected seats and is a military watchdog for veteran’s rights. https://veteransinpolitics.org 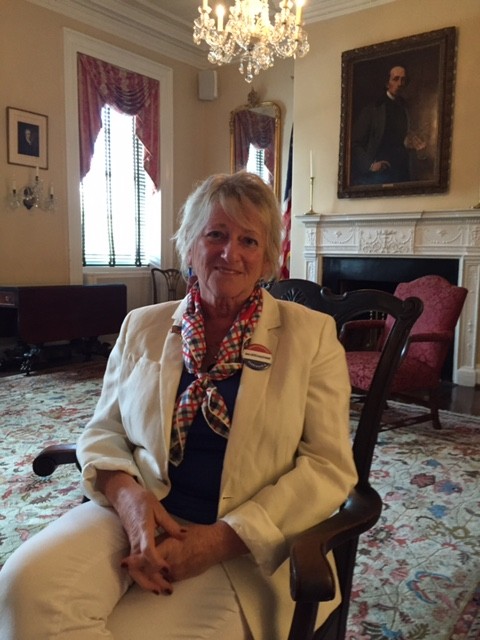 Dr. Kahn has a Ph.D. in clinical psychology with a special focus on group dynamics and conflict resolution. Dr. Kahn worked 32 years in the federal government as an organizational psychologist focusing on organizational change – 22 years at the Federal Aviation Administration including six years on the White House National Partnership to Reinvent Government. Before that she spent eight years at the Internal Revenue Service (as an internal consulting psychologist) and two years at the Department of Health, Education and Welfare – now the Department of Health and Human Services. Dr. Kahn has written three books – two about government reform and one about peacemaking. Dr. Kahn has done strategic planning work in the areas of aviation juvenile justice reform and probation reform and homelessness.
http://www.vote4lynn2016.com

A Message from Veterans In Politics President to Elected Officials & Candidates 2016The Face of CORRUPTION!