Gibson: “Stop telling me what you lost at least they are still alive; my husband is dead because of YOU”!

Then Sheriff Douglas Gillespie automatically came to the aid of Arevalo by downplaying the officers’ actions in a News Conference by saying the officer used his weapon in defense of police officers due to Stanley Gibson using his vehicle as a battering ram.

It was later discovered after a civilian took a video of the incident that Gibson was sitting in his vehicle spinning his tires, trapped between two police cruisers and officers were at a safe distance. Because of this lie by Gillespie, the lies told prior to this incident, and the lack of de-escalation training Veterans In Politics International was the “only” organization to go on television and asked for the Sheriff’s resignation immediately following this incident.

In January 2012 (VIPI) Veterans In Politics International interviewed the widow Rondha Gibson on its radio program and made two promises to her; the first promise was to make sure Officer Jesus Arevalo will lose his badge and the second promise is the push for a new Sheriff for Clark County.

Veterans In Politics International interviewed the wife of Officer Arevalo and it was said in the interview that Arevalo made a statement indicating that he wanted to “shoot someone so he can be placed on Paid Administrative Leave”.

Officer Arevalo was the only LVMPD Officer to be brought before the ‘Secret Grand Jury” at the direction of Clark County District Attorney Steven Wolfson. Arevalo was the only Police Officer in over 40 years of the Las Vegas Metropolitan Police history to be terminated because of a wrongful shooting and that recommendation came from the Las Vegas Metropolitan Police Department “Use of Force Board” headed by then Assistant Sheriff Ted Moody.

Arevalo is receiving disability payments from tax payers at the tune of $30,000 per year for killing Stanley Gibson. I ask you is this justice?

Veterans In Politics International and many organizations from this community campaigned against the “More Cops Bill” that was sponsored by Gillespie to increase the multi-million dollar bank account of the Las Vegas Metropolitan Police Department.

The 2013 Nevada Legislators sent the bill back to Clark County to make a decision to move forward. There were three Clark County Commissioners: Steve Sisolak, Chris Giunchigliani, and Susan Brager who declined to raise sales taxes to add to Gillespie’s budget. Gillespie decided against a re-election campaign after he made an announcement that he would campaign for a third term.

Veterans In Politics International accomplished both promises made to Rondha Gibson with the help of countless people and organizations of this community.

Stanley Gibson was suffering from (PTSD) Post Traumatic Stress Disorder and the Veteran Administration also failed Gibson as well as the many military veterans that survive combat in a foreign land just to return to our country and killed by a police officer that was sworn to “serve and protect”.

This incident received the attention of the Stars and Stripes the largest military newspaper in the world to do a story on the demise of Stanley Gibson (see article: http://www.stripes.com/program-trains-police-to-defuse-confrontations-with-troubled-veterans-1.312280 ).

This incident cause our 2013 legislators to sponsor a bill that calls for “veteran” to be placed on Nevada Driver’s License with the help of VIPI in an effort to alert Police Officers that they are dealing with a military veteran and to use their de-escalation training. 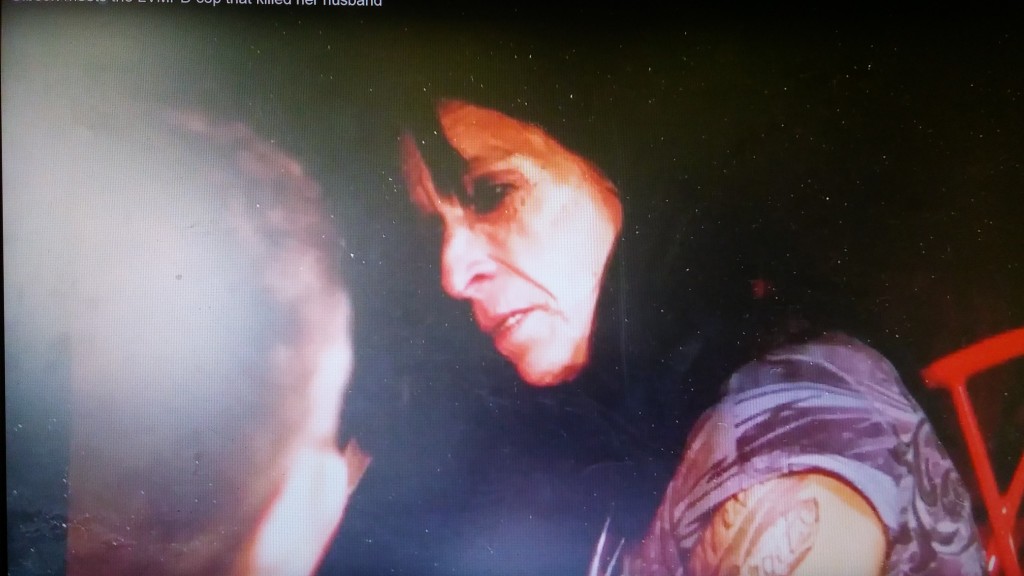 Gibson meets the LVMPD cop that killed her husband

Arevalo: “Blames the faulty radio communication on the death of Gibson”.

Gibson: “Said her life has been destroyed because of what Arevalo took from her”.

Arevalo: “Said he can’t sleep since the incident”.

Gibson: “Said she has been receiving death threats from metro police officers”.

Arevalo: “Said cops are harassing him”.

A look into a killer cops eyes

Gibson: “Said Arevalo made two statements to investigators that contradict themselves… One statement Arevalo said he saw Gibson’s hand on the steering wheel and another statement he stated he couldn’t see into the car”…

Arevalo: “Blames the death of Gibson on the LVMPD Lieutenant in charge”.

Arevalo: “Said metro trained officers to kill and he doesn’t have any military training all training is from metro”.

Arevalo: “Said former Sheriff Doug Gillespie lied to the media and said Arevalo was a Naval Veteran. This is a false statement Arevalo was Never in the US Military”.

Gibson: “Wanted to know why Arevalo used his own personal AR-15 to kill her husband who sustained defensive wounds”.

Arevalo: “Said metro terminated him, because he doesn’t go with the flow and he is not involved in the “Dirty Politics” they play”.

Arevalo: “Said the Sheriff leaked his personal information to Channel 8 News to make him look like a monster”.

Gibson: “Confronted Arevalo on being a racist”.

Arevalo: “Said his ex-wife was in a mental hospital because he was in a custody battle for his son”.

Arevalo: “Said his 17 year old daughter doesn’t want anything to do with him”.

Arevalo: “Said family court has its own set of rules”.

Arevalo: “Said before the shooting he was working on getting back together with his wife”.

Arevalo: “Said he is a free thinking cop that doesn’t go with the flow”.

Gibson: “Said her husband’s last words to her was ‘Come and get me boo; I am cold and I want to come home’”.

Arevalo: “Said he had to move because of Steve Sanson placing his address on social media and people started to drive by his house”.

Gibson: “Said cops parked themselves in front of her house taking pictures”.

Arevalo: “Said that there is no brotherhood in the Las Vegas Metropolitan Police Department”.

Arevalo: “Said he is being harassed by cops”.

Arevalo: “Claims abuse by his son step-farther and now he being convicted of two misdemeanor crimes because he was trying to protect his son and metro wants to see him behind bars for six months”.

Arevalo: “Said former Sheriff Doug Gillespie is very revengeful, that he is being followed by cops, and his union rep told him to be careful what he says on his phone”.

Gibson: “Asked why you had to shot 7 bullets”.

Gibson: “Said stop telling me what you lost at least they are still alive; my husband is dead because of YOU!”

Gibson: “Said it was illegal to use tear gas in such a closed space”.

Arevalo: “Said that there was an original team to extract Gibson, but the Lieutenant changed the plane and acted with hast and grabbed any cops he could find to put a team together”.

Gibson: “Said she can’t hate Arevalo no matter how she tries and she can’t look at him”.

Gibson: “Said she lives with the pain every day”. 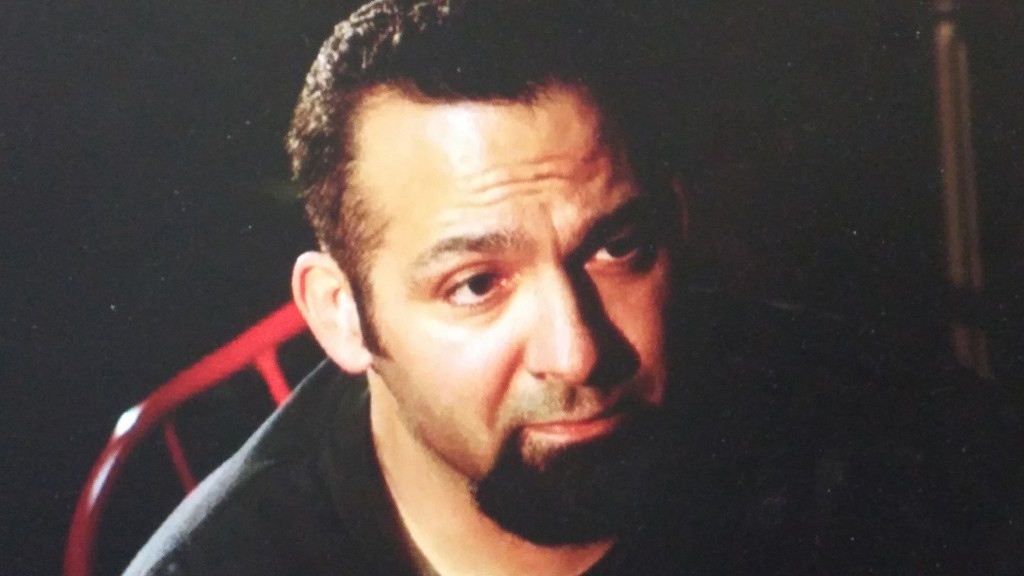 Another look at the LVMPD officer who killed Gibson

Face to face with a killer

We feel that the publication of these videos are important into understanding what goes through the minds of a Police Officer and the devastation the families have to go through for years to come in an “unjustifiable” police shooting that causes the death of a loved one.

Veterans In Politics International, Inc.:
Established in 1993: Veterans In Politics International, Inc. Mission is:
To educate, organize, and awaken our veterans and their families to select, support and intelligently vote for those candidates whom would help create a better world, to protect ourselves from our own government(s) in a culture of corruption, and to be the political voice for those in other groups who do not have one.
For information or if you would like to become a member or donate to our cause please visit www.veteransinpolitics.org we are a not for profit.