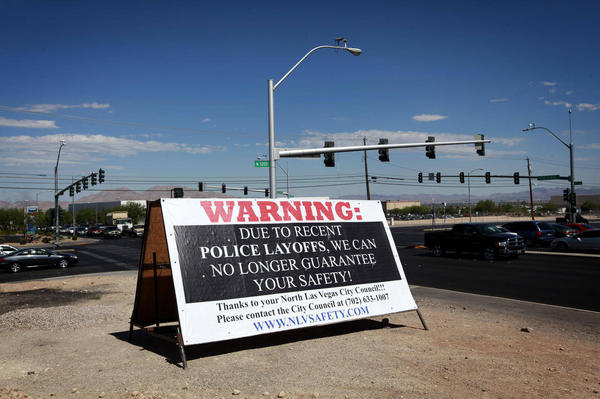 “Nevada was recently rated the nation’s fifth most corrupt state by a highly respected, Pulitzer Prize winning, non-partisan, non-profit group in D.C. NLV may be its most corrupt city”

Former Las Vegas Mayor Oscar Goodman told us years ago, “If they are not talking about you, you don’t matter.” Apparently, we matter!

On the heels of threats against Steve Sanson and Veterans In Politics International (“VIPI”) over the corruption that VIPI is exposing in North Las Vegas (NLV), several problematic NLV Police Officers’ Association members recently formed an entity called “Nevada Veterans In Politics.”

This group, obviously trading off VIPI’s name and history of exposing corruption, is seeking to confuse voters and other endorsing organizations to undermine VIPI’s work in cleaning up dirty cops and politicians in NLV.

The primary purpose of NLV’s Police Officers Association is to defend cops accused of wrongdoing. It makes sense then that the problematic elements of this union would fight tooth and nail to stifle VIPI.

According to its press release, the new group’s stated purpose is to “support and recommend candidates who pledge to vote about issues that will help veterans and their families.” The group will be holding endorsement interviews for candidates in the near future, and claims to be looking for additional board members.

Before joining or interviewing, ask yourself: “Am I being part of the problem or part of the solution?”

The Officers of this new group are as follows:

President and Director – Michael Yarter. Yarter is the President of NLV’s Police Officers’ Association. Yarter earns $194,692.48 per year in salary and benefits from the broke City of North Las Vegas.

As VIPI recently reported, according to sources, Yarter has either directly or through Political Action Committees funneled over $20,000 to the campaign to recall North Las Vegas Municipal Court Judge Catherine Ramsey for being “a stickler” on the law, and to NLV’s City Attorney Sandra Morgan’s judicial campaign to replace Ramsey.

We previously reported on Morgan’s solicitation of judicial campaign funds in apparent violation of Nevada’s campaign finance laws. It is perhaps not a coincidence that Morgan refuses to file a campaign contribution and expense report despite our urgings that she do so.

We also previously reported on what appears to be blatant ethics violations by Morgan — As NLV’s City Attorney, Morgan is Ramsey’s lawyer. Working to recall your client and running a campaign to replace her before she is even recalled, stinks of conflict of interest. None of this is good for a City Attorney, let alone for an aspiring judge.

Secretary: Loran McAlister. McAlister is the Vice President of NLV’s Police Officers’ Association. He was involved in an officer-involved shooting on March 26, 2012 and was the subject of a civil rights lawsuit on November 3, 2014. McAlister receives $204,367.83 a year in salary and benefits from broke NLV.

Treasurer: Jason Scarale. Scarale is NLV’s Police Officers’ Association Board Representative. He was involved in an officer-involved shooting on September 22, 2015 and was the defendant in civil rights lawsuits in 2002 and 2014. Scarale receives $222,977.62 a year in salary and benefits from broke NLV.

Carreon was VIPI’s Nevada Chapter President from April 12, 2015 to July 27, 2015; three days after VIPI came out with an article exposing the corruption against Judge Ramsey, Carreon resigned. VIPI offered him the title after Carreon lost his bid to unseat NLV City Councilwoman Pamela Goynes-Brown.

Carreon was unemployed and jumped on the opportunity in order to gain name recognition given his political aspirations. During the time he worked with VIPI, he never paid dues, and did not have access to VIPI’s confidential information, including VIPI’s membership list. As we now see, this was a smart decision on our part.

Being unemployed, Carreon who is a photographer by trade, was hired as a photographer for Sandra Morgan. When VIPI started exposing Morgan’s wrongdoing, Carreon resigned from VIPI claiming he wanted to spend more time with the City in order to boost his electability. Although he may actually have been pressured by folks in NLV to resign from VIPI, his stated desire appears to have come to fruition. Carreon’s ambitions have now put him squarely in bed with some of NLV’s problematic “public servants.”

Carreon’s loyalty is for sale to the highest bidder.

Ryann Juden, NLV’s Assistant City Manager once said “we can sell this to the Low Informed Voters” and “the media works for us.”

VIPI has operated in Nevada since 1992. We are not going anywhere, and certainly not in response to a misguided campaign by the very people we are working to expose.

In 2004, we defeated efforts by Ed Gobel to take our name. We will do the same again. The name Veterans In Politics is protected under state and federal laws and we will take all legal steps to defend it.

Be informed, draw your ethics line, and be part of the solution.

Deacon Taylor Veterans Party of America and VP Candidate“How Many EMRB Complaints Does it Take for NLV’s Mayor Lee to Get the Message?”