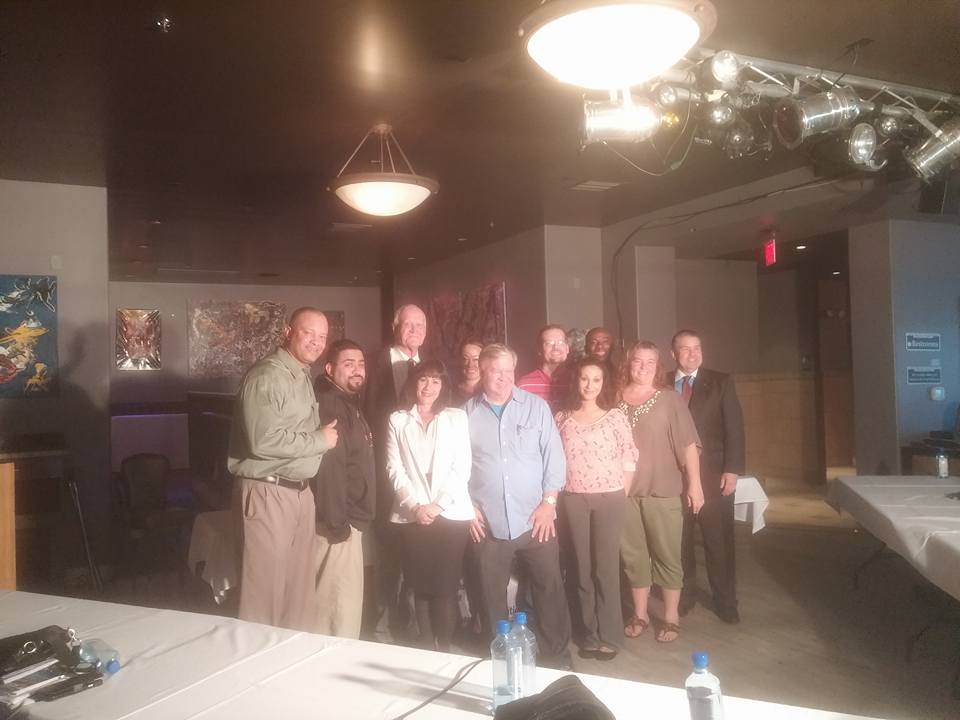 The process was open to the public, live streamed on social media, taped, unedited no questions are known until they are asked, and no candidates are rubber stamped, no “back room deals, no financial gain, the panel members’ identities are not publicly released until the day of the interviews and we do not discourage any candidates from participating in other groups endorsement process.
We are not intimidated by any other group that interviews candidates and have a fair process.
“We do not conduct private political endorsement interviews in a Nevada State tax payers building”
No one is paid to be a part of this process; we do it for love of community in an effort to educate the public on the candidates running for office.
We do not charge or make any promises to candidates for attendance to our process.

The Invocation was given by Dave Jochman Marine Corps League Detachment 186 Chaplain.

The Invocation was given by Dave Jochman Marine Corps League Detachment 186 Chaplain.

The video of each endorsement interviews are archived and on several social media channels including our website. If you don’t agree with who we have chosen to endorse, please educate yourself on the candidates.
VIPI is the only group in the State of Nevada that endorses candidates with this type of transparency. We invite every single candidate that has filed for election by using several different types of communication. No other group comes close.
Our official endorsements are below for each elected seat.

The Veterans In Politics International will video recorded their interviews for the primary and general election of all the elected candidates.

We hope that these interviews will be helpful in the Primary and General Election by placing people in office that are knowledgeable, ethical, experienced, write laws that will benefit all Nevadans, able to put childish differences aside and do what’s best for Nevadans, put others before themselves, take the oath of office seriously, apply the true meaning of “public servant” and have a vision on resolving the problems that are facing our State.

Please watch the videos that are broken down into categories for your convenience (click onto the link or copy and paste to view each interview of the links provided).
Saturday April 9

Disclaimer:
Interview panel members are screened volunteers who are strictly prohibited from receiving any consideration or advice from prospective political candidates seeking an endorsement from VIPI or their opponents. Each panel member signed a “Confidentiality Agreement” and at no time can they disclose any discussions that took place during the time of voting.
Veterans In Politics International, Inc. established in 1992:
Mission: To educate, organize, and awaken our veterans and their families to select, support and intelligently vote for those candidates whom would help create a better world, to protect ourselves from our own government(s) in a culture of corruption, and to be the political voice for those in other groups who do not have one.
(VIPI) Veterans In Politics International
Trademark symbol
Steve Sanson President VIPI
“We know that phone calls were made to candidates not to attend our interview process, only weak minded candidates would be influenced”

Candidates bowing out of the process

“There have been several Veterans’ organizations forming in southern Nevada in an attempt to infringe upon and recreate what Veterans In Politics has done for the past 24 years.

Instead of attempting to collaborate and work together with VIP, these rogue copycat organizations would rather attempt to discredit us. Why, you ask? The reason is simple–because VIP has exposed their underhanded, unethical, and at times illegal activities.

Recently, a copycat organization whose name was meant to confuse the public, and unlawfully infringe upon the registered VIP name, contacted candidates offering endorsements contingent upon non-participation in the VIP endorsement process. The organization was publicly exposed, and has subsequently re-organized under a different name.

This type of unethical behavior is what we are all striving to eradicate from politics; but they are those among us that have crossed the line of propriety and submitted to the demands of this organization.

VIP hosts these endorsement interviews to educate the public. We offer a forum where panel members are permitted to vet candidates in a question and answer format, open to the public.

If you have confirmed your attendance for the endorsement interviews, and have now offered a “scheduling conflict” as a means to back out, you either extremely bad at time management and keeping your commitments, or you may have been dissuaded from participation by the factional, rogue organization that offers rubber stamped endorsements conditioned upon exclusion.

Either way, you probably should reconsider your competency to speak for your constituency.

Good luck in your race”.

“Open to the Public: Nevada State University Regent, Board of Education Member, Assembly and Clark County School Board Trustee Endorsement Interviews 2016”Candidates bowing out of the process