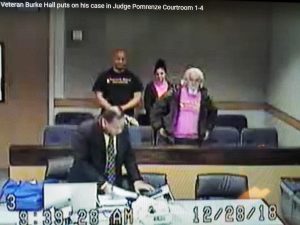 This case has been going on for several years the history of the case is as follows: Mother was arrested and convicted of Negligent for the death of one of the couple’s minor children, Mother is diagnosed with severe PTSD, Mother has several complaints of Domestic Violence and Mother was also dealing with CPS (Child Protective Services).

In the video, you would notice that the Guardian-ad-Litem Frank J. Toti is scheduled to be called as a witness and doesn’t have his reports with him! Instead, he asked the defendant to provide him a copy. The defendant couldn’t provide a copy of the report because the defendant who is representing himself was denied a copy by the court. Toti was grossly unprepared and uninterested in the case.

The father is representing himself as a pro-se-litigant because he cannot afford legal representation and we found out Mel Grimes attorney for mom said that the only reason he took the case is that he didn’t like Steve Sanson War on Family Court. After making this statement to the father in court Grimes asked for attorney’s fees. Grimes should be stuck with all attorney’s fees and cost.

Click onto the videos below of the evidentiary hearing broken into 4 segments: