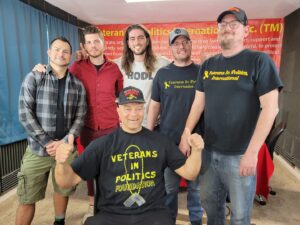 The trio stated that they didn’t like the way Governor Sisolak handling of the Covid-19 epidemic.

Click on the link below to view the video interview: 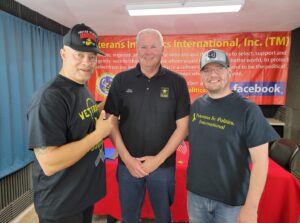 Congressional Candidate wants to oust Suzanne Marie Lee in the next election!

Veterans In Politics video internet talk show interviewed Mark Robertson who has announced he is a candidate for Nevada’s 3rd Congressional District.

Robertson 30 years retired Army veteran who started out from the rank of Private and retired as a full-bird Colonel.

Robertson also served in Iraq with his son in defense of our country in Operation Enduring Freedom the war against terror.

Mark Robertson for US Congress:

Click on the link below to view the video interview:

On Sunday, April 18th, 8:32 AM “America To Me” will host Steve Sanson President of Veterans In Politics International as he exposes the corruption, fraud, and perjury of Mathew Harter Clark County District Judge Family Division in an interview that will air on KKVV-AM 1060.

Attention Litigants, we need your help our Bill AJR-14 “Remove or Retain” is stuck in the legislative committee. This is the bill to Remove or Retain Judges who run Unopposed. Given the public the right to remove a corrupt judge. We need you to contact Assemblywoman Brittney Miller who chair’s the Legislative Ops. And have her put our bill up for a hearing… her contact information: Brittney.Miller@asm.state.nv.us or 775 684 8833.