Watch the POWERFUL video of a military veteran fighting for the lives of his children:

Veterans In Politics International (“VIPI) has been reporting on the travesty and injustice that exists within the Clark County Family Court for years. We have exposed judges bringing their personal bias to the bench, judges showing preference to litigants of their religion, certain judges’ preferential or adverse treatment towards litigants based on gender (male or female), certain judges’ lack of understanding because they don’t have children of their own, judges that are uneducated in family law procedures, judges who ignore federal and/or state laws, judges who apparently resent clients who want to represent themselves (Pro-Se), and judges whose egos and loyalty to certain corrupt attorneys take precedent over their oath of office.

But because it is difficult to detect, we’ve never exposed racial discrimination until now…

Here is the story of a father Burke Hall, a US Army Veteran who has been fighting for his children as a “pro-se” litigant (without an attorney) for several years now. Hall is representing himself because he cannot afford to hire counsel. According to Hall, the mother Vanessa Loftis is also a military veteran who was discharged from the military and is on disability because of PTSD. Neither party was represented by counsel. Hall felt that Judge Sandra Pomrenze was violating his constitutional rights and contacted the Veterans In Politics Court Observers.

Out of the blue, Mel Grimes a very experienced and expensive Nevada Family Law Attorney who normally charges hundreds of dollars an hour contacted Ms. Loftis and offered to represent her for free. Grimes is an active member of the Facebook group “Nevada Court Watchers.”

For those not aware, the Facebook group “Nevada Court Watchers” (“NCW”) is an online group originally formed to retaliate against VIPI and its president Steve Sanson for exposing corruption in the Clark County Family Courts. In the years since its formation, the group has since evolved into what can only be described as a judicial influence scheme to benefit the interests of its owners and founders, corrupt local Family Law attorneys Marshal Willick and Jennifer Abrams. Willick and Abrams run the group through their employees and proxies who act as “administrators.” One of those administrators is disgraced former radio personality Mark Diciero (formerly of “Mark and Mercedes”), a judgment-proof drug addict in his late 40’s that has lived with his parents for several years ostensibly to avoid paying child support to support his daughter. The other administrator is Abrams’ paralegal/eunuch, David Schoen. Since its founding in 2016, NCW has expanded beyond its original purpose of simply harassing, cyberbullying, libeling, and defaming VIPI and its president, to harassing, cyberbullying, libeling, and defaming any litigants that they believe are associated with VIPI or its president, any attorneys who defend any litigants they believe are associated with VIPI or its president, or any judicial candidates they believe are associated with VIPI or its president.

NCW has also expanded its activities beyond cyberbullying, harassment, and defamation. NCW now engages in “doxing” litigants, attorneys, and judicial candidates, witness intimidation, judicial influence, and generally carrying out attacks against any enemies of attorneys Willick and Abrams.

What does all this have to do with racial discrimination in family courts?

The sole reason Grimes wanted to help Loftis free of charge is that Mr. Hall asked VIPI for help and the VIPI Observers reviewed the case and sided with Mr. Hall.

As soon as Grimes was the attorney on record, he had the case sealed which is a typical move by corrupt attorneys to hide bad behavior.

Mr. Hall made an appearance on VIPI’s talk show program this week and decided not to hold back. Hall reported that he observed an African-American woman with a white husband who appeared before Judge Pomrenze and she made the remark “’ You people’ always show up in my courtroom pregnant by the time you reach 16.” The judge directed her comments at Mandah Mitchell, an African-American litigant. Mr. Hall reported that the courtroom video containing Pomrenze’s remarks was subsequently edited and the offensive words removed from the video transcript. Hall also reported other outrageous Pomrenze’ comments where she scolded the same litigant about her black daughters’ “nappy hair” (https://www.youtube.com/watch?v=S15cMw-wB0I)

Mr. Hall continues to update us about his case and stated that with the influence of Attorney Grimes, Judge Pomrenze gave his two sons to his ex-wife, Ms. Loftis despite that she is currently married to a person with multiple felonies and several aliases.

The history of the case is even more shocking. Mr. Hall also reported that Ms. Loftis is also a felon since she took a plea deal for her culpability in the death of the couple’s two-year-old son Israel (https://www.8newsnow.com/news/toddlers-fall-into-hot-tub-death-captured-on-surveillance-video/).  As a testament to his character, even though Mr. Hall was understandably devastated by the death of his son, he pleaded with authorities to show leniency towards the mother of his children (https://news3lv.com/news/local/father-of-drowned-child-says-family-has-been-torn-apart).  See also the Las Vegas Review-Journal article: “Mother of 2-year-old who drowned faces abuse charge”: https://www.reviewjournal.com/local/local-las-vegas/mother-of-2-year-old-who-drowned-faces-abuse-charge/).

“Vanessa Loftis The mother of a 2-year-old child who drowned in a Las Vegas community hot tub has been sentenced to up to five years of probation for felony child neglect (see article: Mother gets probation for neglect in Vegas child drowning.” https://www.ksl.com/article/40307768/mother-gets-probation-for-neglect-in-vegas-child-drowning).

A reasonable person would conclude that the death of one of the couple’s children due which resulted in a felony abuse and a neglect conviction would have a substantial effect on the custody of the couple’s surviving children. Not in Clark County Family Court where it’s who you know, who you pay, or who you do.

Hall continues to uncover the now husband of Loftis who has multiple felonies and now cohabitating with Hall’s two remaining sons. Loftis is now a felon herself and since she should still be on probation, it can be assumed that she should not cohabiting with another felon according to Nevada State Law.

Ask yourself how could this story get any worse than this, Hall continues by saying recently one of his surviving sons attempted to commit suicide and threatened to blow up the school at Katz Elementary because he didn’t want to be with the mother. The evidence was introduced by Attorney Grimes the attorney for Loftis in the custody case (see video: Undercover video of Burke Hall at Katz Elementary School son’s suicide report (https://www.youtube.com/watch?v=62UoqKaG4EY&feature=youtu.be).

Hall stated that Loftis’ father (his son’s grandfather) made a comment stating that he wanted to grow a tree in the middle of his living room to hang “n*gg*rs” on it. Hall’s children are biracial (White and African-American) and this statement was provided to the court. Hall brought this up to the court because he found it to be adversarial for his children to be around Loftis’s father and Pomrenze again ignored it.

Hall read the police reports attached below of Loftis now-husband Nathan Pressley at least that’s one of his aliases. Some of Pressley’s violations include placing a weapon to a minor’s head, larceny, carrying a concealed weapon, being a habitual offender, forgery, felony escape, possession of an unregistered firearm, habitual drug user, child endangerment, etc. Burke Hall and his sons Immanuel & Storm related an occasion where Loftis’ new husband fired a weapon inside the family apartment (https://www.youtube.com/watch?v=zB11vfy193c&feature=share).  Pressley is obviously no role model for the Hall children… Thank you again Judge Pomrenze!

One would think that the Hall must be the devil himself since the overwhelming amount of evidence clearly substantiates that the mother Vanessa Loftis is an “unfit mother”, but the truth is Hall was honorably discharged from the military, has a clean criminal record, has conservative values, and is a devoted Mormon.

Hall stated that both of his son’s adult teeth are missing. Hall stated that Loftis’s current husband is also a deserter from the military. Hall is fighting the court system to avoid placing another one of his sons in a box, stating that the court system always awards the children to the worst parent to keep the caseloads up and to hire more judges. That would explain why some families are involved in the family court system from an infant to a teenager such is the case with the aforementioned NCW administrator and former junkie Mark Diciero who recently abandoned his 14-year campaign of harassment of his former spouse now that his daughter is 17. Notably, Diciero has an uncomfortably cozy relationship with both Judge Pomrenze and her clerk. Guess who the presiding judge was in this former junkie’s case?

“Family Court Judge Sandra Pomrenze was described by attorneys as someone who “is drunk on her own power” and runs a “dictatorial” courtroom”, according to the Las Vegas Review-Journal’s 2019 Judicial Performance Evaluation. This might explain why her name is not on the 2020 ballot for reelection.

It gets better we recently obtained an anonymous email from Nevada Family Law Group List Serve which indicated that Judge Sandra Pomrenze refuses to return to the courtroom until there is a cure for the coronavirus. This is while she sits at home making over $251,800.89 a year in Nevada taxpayer money. In fact, since 2007, Pomrenze has apparently milked taxpayers over 2 ¾ million dollars in exchange for her damage. (https://transparentnevada.com/salaries/search/?q=Pomrenze).  The millions of dollars at stake partially explain why judges defer to powerful family law attorneys who have a lot of influence over whether or not these judges are reelected.

Uninformed voters placed Judge Pomrenze on the bench. We apparently need another way to elected judges or an easier path to remove Judges from the bench rather than to wait around until the next election giving them more time to destroy families and children. Attorneys like Willick propose that people like himself choose the judges. Obviously, this is not the solution either.

Family court is a corrupt entity that needs to stop today!

Watch the POWERFUL video of a military veteran fighting for the lives of his children:

Father loses custody of his two children; after the mother caused the death of the couple’s younger child. Welcome to Family Court!

Vanessa Loftis inside her apartment 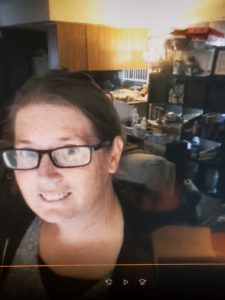 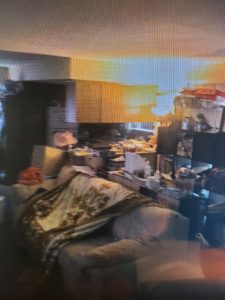 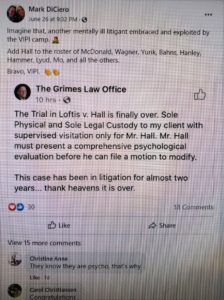 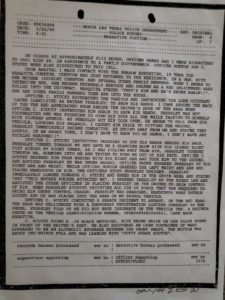 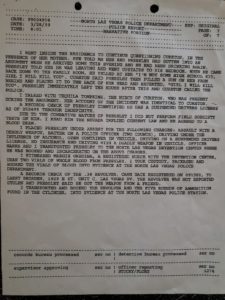 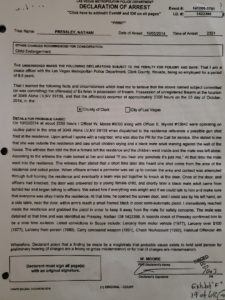 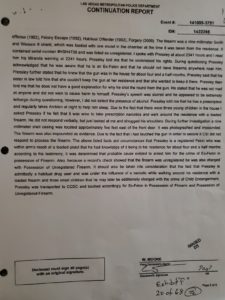 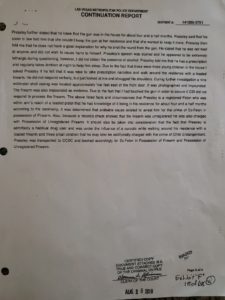 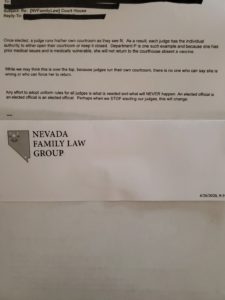 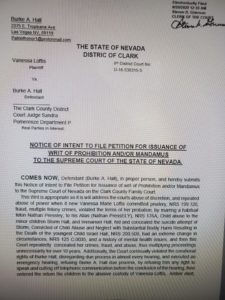 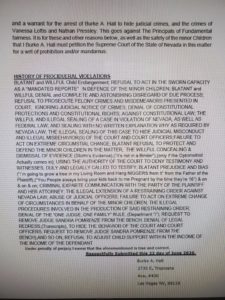 Family Court Judge says!—“Don’t Be a Sailor in My Courtroom!”