You are here: Home / Home - Featured / Father loses custody of his two children; after mother caused the death of the couple’s younger child. Welcome to Family Court! 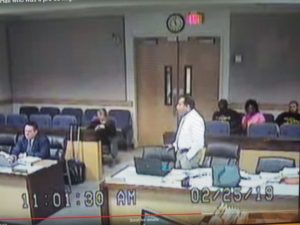 In the people’s court occupied by presiding Judge Sandra Pomrenze, court observers sat in the Evidentiary Hearing of Burke Hall who is a pro-se-litigant Vs. Vanessa Loftis who was accompanied by a council.

Veterans In Politics Court Observers have been following this case for almost two years. The death of the couple’s younger child has devastated the father Burke Hall who is an honorably discharged military veteran of the United States Army.

Mother’s negligence caused the death of the couple’s 2-year-old child in September 2015. Mother’s failure to supervise her child caused him to drown in a hot tub at the couple’s apartment. Mother was accompanied with all three of her children during the incident and still returns to the same hot tub with her two remaining children, a constant reminder of their brother’s death.

Mother was convicted of the death of the couple’s child. Mother has been diagnosed by the military with PTSD and has had numerous complaints of child abuse and domestic violence.

Observers of Veterans In Politics witnessed in court the father’s visible grief over the death of his younger child.  The father is desperately fighting for his other two children. What seems to be missing is any grief from the mother, attorney from mother’s side or the judge. The proceedings of this case to anyone looking in would appear to be appalling with absolutely ‘no best interest of the living children’!

On March 16, 2016, Mother waived her preliminary hearing and bound over to District Court, The State of Nevada vs. Vanessa Loftis case number Case No. 15F13538X on a Felony charge of CHILD ABUSE, NEGLECT, OR ENDANGERMENT resulting in the death of a child see link: https://lvjcpa.clarkcountynv.gov/Anonymous/CaseDetail.aspx?CaseID=11781235.

EVENTS & ORDERS OF THE COURT

EVENTS & ORDERS OF THE COURT

– State submitted. Argument by Mr. Rasmussen. Victim speaker, Burke Anthony Hall, sworn and testified. DEFT. LOFTIS ADJUDGED GUILTY of CHILD ABUSE, NEGLECT, OR ENDANGERMENT (F). COURT ORDERED, in addition to the $25.00 Administrative Assessment fee, a $150.00 DNA Analysis fee including testing to determine genetic markers, and $3.00 DNA Collection fee, Deft. SENTENCED to a MINIMUM of TWENTY-FOUR (24) MONTHS and a MAXIMUM of SIXTY (60) MONTHS in the Nevada Department of Corrections (NDC); SUSPENDED; placed on PROBATION for an indeterminate period not to exceed FIVE (5) YEARS. CONDITIONS: 1. Have DNA taken and pay fees during probation. 2. When addressed at a later hearing, pay the restitution to be ordered; and sign a Civil Confession of Judgment (CCOJ). 3. Undergo a mental health evaluation; complete any recommended counseling. 4. Maintain full-time employment, or attend school full-time; for any month not in school or working, complete 16 hours of community service. 5. Abide by a curfew if imposed by Parole & Probation (P&P). 6. Refrain from the use, control, or possession of alcohol. 7. Report to P&P within 48 hours. COURT ADMONISHED Defendant that probation is a privilege, not a right; and failure to comply will result in the likelihood of incarceration. COURT FURTHER ORDERED, matter SET for a Status Check to address restitution; Defendant’s presence waived for that hearing. BOND, if any, EXONERATED. NIC 7/13/2016 9:00 am Status Check: Restitution

Another whammy in this case is the fact that in testimony, the children’s doctor Akindele Kolade, MD admitted that he failed to bring all of his notes for the evidentiary hearing and made a claim that he is not aware that one of the children has allergies, asthma and heart problems. Even the Guardian-Ad-Litem attorney Frank Toti admitted in past testimony that he failed to bring his notes for testimony as well.  Please be aware that all the witnesses received a subpoena, known the exact date and time when they are to appear in court and they are still unprepared or do not care.

In any event, Judge Pomrenze awarded the mother primary custody of the couples remaining two children. The judge kept telling the father (Burke Hall) to get an attorney, so I guess he is punished as well as his kids (best interest huh?) for not having an attorney?!

This court system has a permanent effect on the lives of every litigant and the child/children before the court.  Most people that work in or around the family court system play games or do not care one iota what type of negative effects they are contributing to these cases.  This system is destroying families and children’s lives.

The family court system treats litigants as criminals, but they are people that are trying to move forward with their lives and looking for solutions to their issues.

We must pay attention to all District Court Judge’s and Hearing Masters; all 52 seats Clark County District Court seats will be up for re-election in January 2020.

We should also pay attention to Retired Judges who seek the appointment to the Senior Judge Program, it’s not automatic.

These judges will start campaigning in June 2019 immediately after the Municipal Elections and Hearing Masters would more than likely seek the position of judgeship.

CLICK HERE TO VIEW: Evidentiary Hearing of Burke Hall who was a pro-se-litigant 1 of 4

CLICK HERE TO VIEW: Evidentiary Hearing of Burke Hall who was a pro-se-litigant 2 of 4

CLICK HERE TO VIEW: Evidentiary Hearing of Burke Hall who was a pro-se-litigant 3 of 4

CLICK HERE TO VIEW: Evidentiary Hearing of Burke Hall who was a pro-se-litigant 4 of 4

Other related stories to this case:

CLICK HERE TO VIEW: Father of a drowned child says the family has been torn apart
https://news3lv.com/news/local/father-of-drowned-child-says-family-has-been-torn-apart