You are here: Home / Endorsement Interviews / Family Court Judge says!—“Don’t Be a Sailor in My Courtroom!” 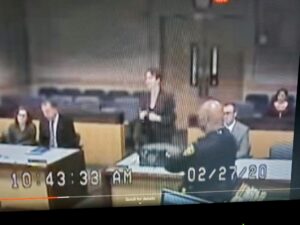 Here’s another sordid tale from Las Vegas family court—which always proves to be a three-ring circus.  This story features the antics of Judge Sandra Pomrenze and local attorney Michancy Cramer.  The other attorney is Donn Prokopius.

It started off as a typical family court hearing.  Who was late to pick up the kid?  Why does one party feel like an unpaid babysitter waiting for the pickup?  Why is one parent subject to the whims of the other parent’s employer?

Luckily for the minor child, Pomrenze does not think inside boxes; Her Honor wants the parties to be creative.  But will the parties be creative enough to ensure the minor child gets picked up on time, if at all?  One thing’s for sure; family court hearings are the most degrading and tawdry legal proceedings known to humanity.  And then Mr. Prokopius pipes-up, breaking the calm of that still, February morning—with pointed allegations against Ms. Michancy.  “She called my client a fucking bitch!” claimed Prokopius.  Michancy vehemently denied the allegations—as the virus surged ever onwards round the globe.

During these troubled times, the child’s best interests take a back seat, as they too often do, to the vainglorious misadventures of Las Vegas lawyers.  And then came the diatribes—should lawyers be cursing on the job!  Is an attorney’s epithet-cursing, (e.g., “You fuckin’ dickhead!”), a First Amendment right?—or an ethical violation?

Note also, the clients are the ones who must finance these lively free speech diatribes.  But this is unfair to the parents who must pay out-of-pocket to endure the clever legal acumen.

Note also, where lawyers engage in cursing epithets—it’s deemed to be “conduct,” not “speech.”  The First Amendment, majestic though it may be, provides no defense.   And then Pomrenze addressed Ms. Michancy, “I have experience with you using inappropriate language.”  Apparently, Pomrenze has actual knowledge of Michancy’s proclivities for cursing.

Quick timeout: readers may know that Ms. Michancy is the lawyer who was placed in handcuffs by Judge Potter.  Notably, Judge Potter was later sanctioned for this misconduct; (and not to go too far afield, but Judge Potter now stands formally charged of passing out ball-gag patches at the courthouse…never a dull moment…).  Readers will note: neither Potter nor Pomrenze will be returning to the bench in Jan. 2021.  Now, back to our story…

“I cuss all the time!” exclaimed Michancy in a most excited fashion.  In response, Judge Pomrenze, in most contemplative tones, carefully explained, “If you wanna be a sailor fine, go be a sailor in your private life—but don’t be a sailor in my court.”

But wait just a sec!  Did Pomrenze just disrespect a couple hundred thousand American sailors?  And where did that saying even originate?—curse like a sailor?  Apparently, the old saying originates from Britain.  As it turns out, the propensity to curse is a trait of British sailors, not American sailors.  (Who knew?)

Truth be told, Pomrenze very aptly handled the matter.  Her Honor correctly explained that if Michancy, in speaking with Prokopius, were to call the opposing party a curse word or epithet, then that would be absolutely inappropriate.  We applaud Pomrenze.  Her Honor understands the mechanics of free speech!

On a gentle, but firm gradient, Pomrenze issued a stern warning: “Ma’am, I warn you—one of these days the State Bar is going to catch up to that.”

Pomrenze explained that such behavior also breaches the “duty of fairness” to opposing counsel.  By using the word “behavior,” Pomrenze demonstrates a keen understanding of the First Amendment, i.e. that epithet-cursing at opposing counsel, or opposing party, is NOT protected speech, but rather, “behavior”—which lawmakers may proscribe—and for which sanctions may be imposed.

Yes, cursing epithets are unfair to opposing counsel (who desperately wants to fire-off his or her own salvo!—right?!)  But most of all, it’s unfair to opposing counsel who, witnessing the cursing epithet, and recognizing it as an ethical violation, now has a duty to report it.  And this takes time.  And it’s a headache.  And it never comes a-well (as this hearing demonstrates).  And then, in the thick of the fray, one is suddenly reminded that the interests of the minor child are long forgotten…

But Michancy was not done!

“I work in an office full of male attorneys that cuss all the time.”  Michancy defended her epithet-cursing based on the fact that male attorneys curse at her and, to make matters worse, the rousing choruses of profanities generate saliva droplets – that inexorably fly all over Ms. Michancy!

Michancy decried what she saw as disparate treatment from the bench based only on her sex!  But, frankly, Michancy kinda, sorta misses the point.

In passionate oration, Michancy defended the fact that she was cursing in the hallway, which is humorous!  If your rollbacks the tape, just five minutes earlier, she denied the cursing incident! Now she’s justifying it.  (LoL!)  Here, Pomrenze has the graciousness to not call-out Michancy for her shenanigans.

As Michancy put it, when she’s in the hallways outside the courtroom, she has her “First Amendment in full effect.”  Michancy pressed on with her rant.  “I will say what I choose to say and when I choose to say it and that is my right in this country!”

Pomrenze calmly corrected Michancy.  Her Honor stressed kindness and respect.  Pomrenze pointed-out that sexism has nothing to do with it.  Michancy’s rants about sexism were simply misplaced.

Then Pomrenze laid down the law on epithet cursing.  “It skirts our rules of ethics—it may be a violation.” Pomrenze added, “I will not tolerate that kind of behavior towards opposing counsel.  If it happens again, I will issue an O.S.C., and we will consider contempt.  Save sailor language for your private life.”  And it should have ended here.  But Michancy went full Energizer Bunny!  She was still going,’!

Michancy loudly protested being rebuked by the judge – for what men do to Michancy on a daily basis.   She insisted that she is a victim of sexism—being rebuked by a judicial officer based only on her sex.  She then began to talk over the judge.  Michancy’s tempo and pitch increased.

Michancy persists with her claims that male attorneys yell, scream, and curse at her all the time.  Pomrenze then asks why these incidents were not brought to Her Honor’s attention.  Michancy tells Pomrenze that she doesn’t want to waste time reporting irrelevant information.  And here, Michancy may have a valid point.  It’s a headache to report ticky-tack fouls.

It’s kind of senseless to tattle-tale to a judge for cursing.  If Michancy got a dime for every occasion on which a man cursed at her, she’d have to tattle-tale to judges on a daily basis.  Ain’t nobody got time for that!

But Michancy soldiers on!  #Unstoppable

“I, as a female attorney, am being chastised over language that men feel free to use every single day, and they do,” howled Michancy.  “Not in my courtroom,” quipped Pomrenze.

Michancy continues with her heartfelt rant.  One wants to applaud her effort – It’s just that her voice is so screechy and shrill — it attacks the senses like an icepick to the forehead.

“You’re giving me a headache because you’re yelling,” says Pomrenze.  But wait a sec!—if this were a pro-se-litigant, Pomrenze would have shut her down a long time ago.  Pomrenze should be using the same tone with all parties, regardless of whether they’re an attorney or pro se litigant.

Pomrenze has the last word: “If, in fact, it comes to my attention, that kind of behavior, which I consider violent—I’m going to admonish them.”  Okay, um, stop right there—did Pomrenze just use the word “violent?”  Yeah, she did!  Her Honor likened epithet-cursing to violence.  And this is total hypocrisy, pomposity, and arrogance.

Yes, epithet-cursing at opposing counsel is sanctionable conduct under the rules of court, but it is NOT violence.  Violence is when an armed man saunters across the well of the courtroom, during live oral arguments, with the specific intent to bully and intimidate lawyers and litigants.  This constitutes an assault!  It is conduct intended to cause apprehension in the person of another!—it is properly characterized as violence!—and it’s intolerable!

Truth is, the Courtroom Deputy Marshalls in any court have no chain-of-command, no superior officers—except the judge.  These Deputy Marshalls have become personal pit bulls for oppressive judges who lack the charisma to effectively manage their own courtrooms.

Pomrenze opposes cursing lawyers on the basis that it’s “violence,” but still, she’s totally okay deploying her own brand of violence—fear, intimidation, coercion, and control.

This practice of judges using overly-aggressive Deputy Marshalls—to strike fear in the hearts of others—is far worse than any silly four-letter word out of Michancy’s mouth.

When Deputy Marshalls raise-up out of their chairs and occupy the well, it’s not law and order – its violence!  And we at Veterans In Politics International call for an end to the violence.

What we do in this life echoes in eternity.

Click onto the link below and Watch the powerful courtroom video:

Family Court Judge says: “Don’t be a Sailor in my Courtroom”!