You are here: Home / News / Clark County D.A. Wolfson Turns His Back On Military Veterans

They say that “actions speak louder than words.”  Here’s a perfect example: 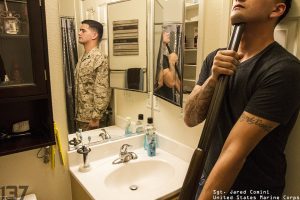 Despite his claimed support for veterans, Clark County District Attorney Steve Wolfson recently filed a petition with the Nevada Supreme Court seeking to effectively destroy Veterans Treatment Court in the State of Nevada!  When that didn’t work, because the plaintiff in the case withdrew rather than risk this terrible result, Wolfson embarked on an active campaign to the Attorney General’s office, affecting judges and others in the criminal justice system, to stop 90% of the cases that are usually referred to these courts!

How can Wolfson with a straight face continue to claim he supports veterans?

Veteran’s Court as administered by the Municipal and Justice Courts are universally hailed, even by Nevada’s Supreme Court, as highly successful in dramatically reducing recidivism, and being much more financially efficient for our taxpayers than throwing our veterans in jail.  Veterans Court offers highly supervised treatment and other programs for veterans who commit non-violent misdemeanors.  Ninety percent of the cases referred to this Court are domestic violence and DUI cases, usually caused by war injuries, or drug or alcohol addictions caused by self-medication to ease physical or psychological pain related to the veteran’s military service.  If the veteran successfully completes the program, then he/she can have the case dismissed and records sealed so that he/she can get a chance at a fresh start.

Wolfson Throwing the Baby out with the Bathwater Over a “Legal Technicality!”

Wolfson’s issue has nothing to do with the merits of how cases are handled in Veteran’s Court — indeed, Wolfson’s office routinely and continuously pleads down domestic violence and DUI cases involving non-veterans, without even subjecting them to the supervision and treatment programs required by Veterans Court.

Rather, Wolfson is obviating Veteran’s Court over a “legal technicality!”  He complains that the law does not technically allow Justice and Municipal Courts to refer their own cases to this court and that only the District Court, which has jurisdiction over more serious crimes, has the ability to refer these cases.

If Wolfson’s true intent was to simply clarify the law, Wolfson could have simply lobbied the legislators to clarify the statute.  There would be no reason for him to throw the baby out with the bathwater!

We Fought Long and Hard for this Court!

Perhaps Wolfson doesn’t recall or know how hard it was for us to get Veterans’ Court instituted in Clark County the first place.  Veterans in Politics International (“VIPI”) remembers as it was instrumental in that effort.  No one in our community should take this Court for granted!

To its credit, the judge in Washoe County immediately established this Specialty Court, even traveling to rural areas to conduct Veterans Court even though there was no obligation that rural areas have access to this court.

Clark County, however, did not participate in the program.   To remedy this, VIPI met with numerous judges in Clark County to garner support for the program.  VIPI was invited to speak before the “All Judges” meeting in Clark County to discuss creating a Veterans Court, but was told at the meeting that the judicial system would love to establish another specialty court; however, there was no money to do so.   VIPI refused to give up.

The President of the Nevada Chapter of VIPI, reached out to Senator Leslie, who invited her to observe Veterans Court in Washoe.  The VIPI Regional Chair in Washoe, along with the State President, met with Senator Leslie and received a very eye opening two-day tour of Washoe County’s Veterans Court Program.   VIPI learned that they applied for a $100,000 scholarship from the Supreme Court to pay for a Probation Officer (who was a Veteran) and a court administrator (also a Veteran).  The first year they had approximately 50 people in the program and only 1 person was not successful.  This averages out to approximately $2,000.00 a year, per person.  It costs taxpayers approximately $5,000 per month, or $60,000.00 per year, to incarcerate someone at the Clark County Detention Center.  $100,000.00 invested in a successful program could save taxpayers $3,000,000.00 over a one year period.  Most importantly, VIPI learned that $7.00 toward every traffic ticket goes toward the Specialty Courts.  Clark County wanted a large portion of that money to go towards the Drug Court and seemed more interested in putting our veterans in Drug Court, than establishing a separate Veterans Court that would involve their peers.  VIPI continued to contact judges in all the courts, in groups, and individually.

Judge Mark Stevens in Henderson, himself a veteran, recognized the problem and after consulting the Henderson DAs and Public Defenders, he established a Veterans Court in his courtroom.  Judge Stevens created a court of peers, reached out to various groups to recruit mentors, and has never asked the Supreme Court for financial support.  Judge Stevens has conducted fundraisers to assist the Veterans in his courtroom from buying a bicycle, to helping them with rent when they have fallen on hard times.  Judge Stevens’ Veterans Court became and remains the most successful court in Clark County.

In 2013, the Nevada legislature tried to change the relevant statute from “shall” (which means must) create a Veteran’s Court, to “may, if funds are available.”  Veteran’s Court was the only Specialty Court for which the language “if funds are available” was being proposed.  VIPI issued a scathing press release accusing the legislature of putting prostitutes (Prostitution Court) ahead of our veterans.  VIPI appeared at the Grant Sawyer Building to speak against this new amendment at a hearing that was supposed to start at 9:00 a.m.  After several hours of waiting (VIPI members used their vacation time to make this appearance), Senator Tick Segerblom appeared on camera.  VIPI members went to the microphones to speak, but were never acknowledged.  Instead, it was announced that the amendment was being tabled.  VIPI stayed on top of it and the amendment never passed.

Now, the DA is trying to shut down this court.  Judge Stevens’ Veterans Court, one of the most successful Veterans Court in Clark County, which costs the taxpayers absolutely no additional funding, is being told to shut down because the law doesn’t allow him to conduct this Court.  The DA is also shutting down Veterans Courts supervised by Judge Melissa Saragosa in the Las Vegas Justice Court, Judge Chris Lee in North Las Vegas Court and Judge Martin Hastings in Las Vegas Municipal Court.

Can there be any doubt that our men and women in uniform deserve their own courts?  They are self-medicating and becoming addicted to pain killers from injuries they received and numerous surgeries, protecting our country, our rights, and our freedoms.  Men and women who have seen things most of us can only imagine.  We have a broken VA system.  Our vets are committing suicide at an alarming rate of approximately 35 veterans per day.  Where is our compassion and gratitude?

Where is our outrage towards those who seek to marginalize our veterans?

D.A. Wolfson, supporting veterans isn’t a game of verbal platitudes.  When you claim to support veterans, you must act accordingly or it means nothing.  If there is a technical problem with a law, work to fix the law.

You should not work to get rid of one of the best things in the justice system to ever happen for our Nevada veterans!