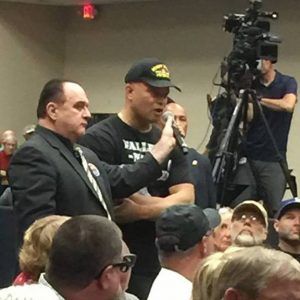 During a Rally at the Henderson Nevada Convention Center on Wednesday August 17, 2016… Indiana Governor and candidate on the Republican ticket for Vice President of the United States answers a sticky question concerning veterans with mental health issues being incarcerated within the United States… These veterans fought for our freedoms but end up having their freedoms denied when they return home.

The important factor to this question is the tremendous need for Veterans Court on all levels of our judiciary throughout our country.

The question is; “What is a Trump/Pence Administration going to do about the 145,000 veterans incarcerated in our nation’s jails and prison suffering from TBI and PTSD”?

Janiece Marshall & Jeffrey Posin to Appear On the “Veterans In Politics” Video-Talk-Show“Open to the Public: Henderson Justice of the Peace Department 1 Special Election Judicial Endorsement Interview 2016”