You are here: Home / Press Release / Stavros Anthony & Tom Bush to appear on the Veterans In Politics video Talk-show 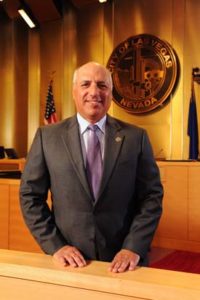 Gordon Martines is a former LVMPD detective who served in many capacities over his 39-year career in law enforcement. He was a candidate for sheriff in 2002, 2006, 2010 and 2014, with the intention of bringing integrity and accountability back to the department; he filed a federal lawsuit against LVMPD in 2011 with those very things in mind.

Martines appeared on “Face the Tribune” radio show with his long-time friend Rolando Larraz several times and later became the host of “Open Mic” on Tuesdays and Thursday at 11:00 a.m. He contributed his opinions and ideas to the Las Vegas Tribune to keep the public informed and to help improve policing in Las Vegas.

It’s time we take back our courts!

Our Nevada legislators will be receiving a Bill Draft Request to adopt 8 to 15 more Clark County District Court Judges for Family and Civil/Criminal Courts. That would include the same amount of Law Clerk’s, Judicial Executive Assistant, and Courtroom Marshals.

During our investigation of our current Clark County District Court Judges we discovered that most of them work between 20 to 35 hours per week, that would also include their courtroom Marshals. Especially Family Court Judges.

Clark County some of these same Judges take 3 to 24 months to render a decision putting your lives on HOLD!

When they do their campaign to be reelected, ask them to prove their attendance.

During the election campaign, 2020 don’t be fooled by television commercials or a common name that would mostly mean that attorneys and law firms that stand in front of these same judges are buying their verdict!

Here is an easy fix, work 40 hours per week.