You are here: Home / Home - Featured / Over a half a million views on one family court video; the hard truth!

The year 2020 is going to be one of the biggest election seasons in Clark County Nevada. We are going to have a very heated Presidential Election and Nevada is a swing state. We are also going to have all 52 Clark County District Court Judge seats up for grabs, out of that number twenty of those seats are in the Clark County Family Court.

In previous elections, we were told that many voters didn’t know who to vote for when it came to our judicial seats because nobody had any background on the judges that are currently on the bench.

The Veterans In Politics International, Inc. believes in transparency and educating voters. We have created two YouTube Channels that contain hundreds of courtroom videos so you can see these judges and attorneys in action. Many judges in the family court division and attorneys that practice there don’t want you to see their behaviors or lack of knowledge of the law, in many cases attorney’s would “seal” their cases and request a “closed hearing” to avoid any transparency.

The judges will grant a sealed case with only one party requesting it, this is called ex-parte and without a hearing. When they seal cases the entire case is removed off the court’s website like it never existed, this is against the law and the Nevada Supreme Court also frowns on this type of behavior, but this practice continues without any end in sight.

We should just remove our legislative branch of the government and allow our judicial branch to legislate from the bench! They are doing it now without any repercussions.

On many occasions, judges will arbitrarily have a closed hearing without any parties requesting it, or their Deputy Marshal will have a lapse in memory and “forget” that they locked the courtroom door, keeping the public out of the courtroom. But it doesn’t stop there if court observers enter a courtroom, one of the attorneys would request a “closed hearing” and the judge will automatically grant it, the funny thing is there is no document filed with the court requesting a closed hearing, this practice is also against the law.  With a more defiant judge, only the court observers are requested to leave the courtroom, leaving everyone else to remain inside and watch the case, this is a discriminatory behavior. They claim that the people remain are family or caseworkers, but the state law reads that everyone is to leave the courtroom if a case is “sealed” or a hearing is “closed” except for the litigants before the court.

Why do they do this you might ask? The answer is to avoid answering to any scrutiny or malfeasance.

The attorneys would argue that it’s for the “best interest of the child”, but in many cases, there is not one mention of children. In reality, they do it for the “best interest of themselves”. Some would argue and say divorces are a very sensitive and private matter it should be under a “lock and key”. Funny, when you use tax dollars to pay for something or pay for someone salary, privacy is out the window, unless it’s a medical issue and if they think divorces are sensitive try seating in on a rape or molestation case in the Clark County Criminal Court Division, there are hardly any closed hearings or seal cases there. But in family court, this process is so abused it’s normalized, why? Because almost everybody does it, here it is, judges want to be reelected and attorneys want to be judges, so the less you know about their performance in the courtroom the better it is for them to get reelected or elected. On the campaign trail, they will only tell you what they want you to hear. Don’t be gullible and do your research!

These cowards have attempted in so many ways to shut down our organization, because the truth of it all, is that no one has the backbone to stand up to them and say enough is enough, in addition, this violates our First Amendment Right!

It’s crazy almost everyone that is employed by the courts knows about the injustice and corruption but chooses to ignore it because they don’t want to be a target or they are a part of the corruption. Attorneys are worried about their next case in front of the Judge and Judges are worried if someone is going to run against them or stop their financial ability to sustain a reelection campaign.

When we court observe we are observing the judges performance and the attorneys before the court. Violation of Federal and State Laws, violation of their own Code of Ethics and Cannon Rules is something we frown on, but it seems to be the constant behavior in family court, that’s if they show up to work at all.

The President of Veterans In Politics International have been observing the courts house since 1998 and our organization has been really paying attention to the family court division since 2014, and organized court watchers in 2016, so the question is do we know what we are looking for, absolutely we do!

We have begun the process on vetting attorneys to replace some of the Judges that are on the bench and we will continue to do that until we make our official endorsements in February or March 2020.

We have also engaged by reaching out to every single Clark County District Court Judge in an effort of giving them the opportunity to be our guest on the Veterans In Politics video internet talk-show program because we believe in the first amendment, transparency, and fairness.

We are so proud that voters have taken an interest in the court videos, one video has received over a half million views and climbing. 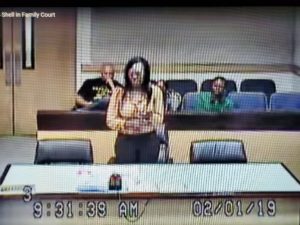