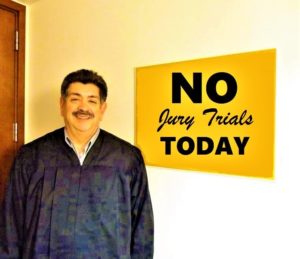 T. Matthew Phillips, a self-styled “whistleblower,” alleges that Judge Ochoa blocked Phillips at His Honor’s Facebook page, which Phillips claims is unconstitutional.  According to the complaint–

“Defendant Ochoa violates [Phillips’] substantive rights under the First Amendment: (i) the right to free speech, and (ii) the right to petition for redress.”

Phillips is also suing Clark County and State of Nevada for negligence—for failure to train elected officials to not exclude dissenting voices in a public forum.  According to the complaint–

“‘But for’ their negligence in failing to train the judge on basic free speech principles, Plaintiff would not have suffered civil rights deprivations.”

“His Honor promotes and fosters a ‘fatherless society,’ in which the gov’t removes a parent, and then substitutes itself—in loco parentis, i.e., ‘in place of the parent,’ so that the gov’t may wield greater power and control over the lives of children, ultimately, to make them beholden to the state.”

The lawsuit seeks both money damages and injunctive relief.  According to the lawsuit, Phillips requests the following legal remedies–

“[Phillips] seeks an injunction requiring Defendant Ochoa to: (i) halt the censorship on Facebook, (i.e., removal of comments); (ii) halt the “blocking” of critics on Facebook; and (iii) lift the Facebook “block” on all persons, including Phillips, so that Dept. ‘S’ litigants may visit His Honor’s pages—to ‘freely publish their sentiments on all subjects,’ as Nevada Constitution affirmatively permits, [Nev. Const., Art. 1., § 9].”

Asked whether he expects to prevail, Phillips stated:  “I’m a free speech enthusiast!  Win or lose, it’s fun to argue.”

Phillips added:  “All I want is to see my son.  But this judge will never, ever let that happen.  Ya know?  This judge even told me I look suicidal — but still, he refuses to let me see my son.”

What does Phillips hope to accomplish?  “I’m gonna prove that this judge violated my civil rights — and then I’ll have legit grounds for disqualification — and then I’ll just cross my fingers and hope that the next judge has a small semblance of humanity.”

We had no way of reaching Judge Ochoa for comment.