Happily, the Nevada Supreme Court today REVERSED the lower court decision which had previously ruled against Sanson and VIPI — and this spells a huge free speech victory! 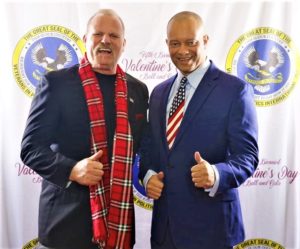 What’s going on?  Well, Steve Sanson—a long-time champion of Veteran’s Rights—is on a mission to safeguard the fundamental rights of Las Vegas parents by exposing systemic family court corruption.  Towards this end, Sanson had made certain critical statements of and concerning Willick and his law firm.  And then the drama began…

But most importantly, Sanson’s statements about Willick were: (1) made in direct connection with issues of public interest; (2) made in a public forum; and (3) made in good faith.

As it turns out, however, Marshall Willick and the Willick Law Group did not take kindly to Steve Sanson’s criticisms.  Willick thus sued Sanson and Veterans in Politics for defamation and emotional distress, etc.  And Sanson was forced to hire a defamation rights lawyer, (of which there are too few in the phone book!).

But Steve Sanson and VIPI had the good fortune to retain the services of a very capable and experienced free speech advocate, Anat “Annette” Levy, Esq., of Levy and Assoc., right here in Vegas.

But Willick sorely underestimated the strength and resilience of his opponent — a proud United States Marine.

But Sanson and Levy were not ready to accept a poor ruling.  No indeed!  Committed to total victory, Ms. Levy filed an articulate and well-drafted appeal to Nevada Supreme Court.  And today, (Feb. 21, 2020), we are happy to announce that the Nevada Supreme Court has REVERSED the lower court decision.  And this is terrific news for free speech aficionados throughout the Great State of Nevada!

Phillips, an experienced anti-SLAPP litigator, has been following the VIPI saga.  Phillips explained: “Sanson’s a good guy.  He always tells the truth.  He totally made statements under subsection 4 – meaning that his statements, of and concerning the plaintiff, came in direct connection with an issue of public interest – and Carson City finally recognized this all-important factoid.”

The purpose of anti-SLAPP laws is to prevent situations where an individual, typically the “little guy” — who is often lacking in financial resources — is suddenly subjected to frivolous and costly litigation by a more wealthy opponent — who’s out for revenge because of something the “little guy” said.  And that’s exactly what happened in Steve Sanson’s story.

Big-shot family court attorney, Marshall Willick, does not wish to see Steve Sanson spreading the truth (and for obvious reasons), and so, Willick slapped Sanson with a frivolous lawsuit – disguised as a defamation lawsuit.  But today, thankfully, the learned justices in Carson City finally recognize Willick’s little stunt for what it truly was—a meritless legal maneuver calculated only to inflict economic burden and hardship — and punish Sanson – for telling the truth!

Steve Sanson, a proud Veteran, and brave social justice warrior is a friend to many beleaguered family court parents in the Vegas Valley.  A very elated Steve Sanson today told VIPI: “Yes!  That’s right.  We won!  And now is the time for everybody to stand up against family court attorneys and judges who railroad others!”

Sanson emphasized, “We will keep fighting the good fight!  And we will keep winning – for the sake of our fellow Veterans and for everybody else as well.  Yes, definitely, we will keep exposing family court corruption here in Las Vegas.”

Sanson explained, “The only reason they did this to me is that I stood up to all their corruption.  We stand up for Veterans who have been lost, ignored, chewed-up and spit-out by a system of indifference that refuses to recognize parents’ constitutional rights.”

Sanson added, “Hey, I took an oath to defend the Constitution, and so did all the other devoted men and women who honorably served in our armed forces.  No sir!  We refuse to allow them to ignore the Constitution for which we fought.”

It is now apparent that Willick’s lawsuit targeted Sanson for his speech-related activities, and further, the lawsuit was intentionally calculated to make Sanson incur legal fees he couldn’t afford.  Willick must’ve thought it a foolproof plan.  Willick himself stood to incur no legal fees because, after all, he represents himself.  But it was not to be.  The universe today righted itself and Willick’s plan to economically bludgeon Sanson has officially backfired!  Today, hope burns bright!

Sanson now awaits the court’s final details on remand.  Sanson hopes the court will soon calculate an attorney’s fees award—which could be a tidy sum of money.  Willick could get stung with having to pay a very substantial sum to Sanson’s attorneys.  But then again, that’s how poetic justice works!   🙂

Attention Candidates: Nevada Veterans Association has been Reactivated and Steve Sanson is the New President“Las Vegas Dad Sues Family Court Judge – for Blocking Him on Facebook!”