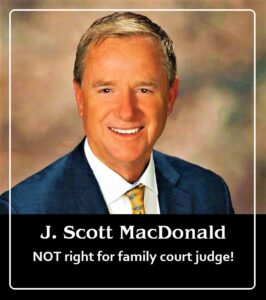 Note, in the primary we recommended MacDonald; however, after we investigated MacDonald, we decided to withdraw our recommendation.

So, what do we know about J. Scott MacDonald?  He practices family law, bankruptcy, DUI, general civil litigation, etc.  Having been admitted to Nevada State Bar in 1985, MacDonald has been practicing law for 35 years.

Here’s a curious tidbit: Back in 1990, MacDonald was divorced in the Eighth District Family Court.  MacDonald claims that the experience of being a divorce litigant contributes to his list of qualifications for the family court bench.  Well, that’s one way of looking at it…

But one has to wonder – having been through the nightmarish hell of family court, who would ever want to return to that cesspool?

Having been a family court litigant doesn’t really count as a qualification – unless your kids were wrongfully taken from you – and then sued the judge in federal court for due process violations – and then you removed the judge from the bench for violating judicial canons.  Now you’re qualified for the bench!

Sources close to the investigation indicate that Mr. MacDonald is “actively involved” with the Legal Aid Center of Southern Nevada.  MacDonald wants folks to think he’s doing pro bono work, but we’re willing to bet that MacDonald is an ardent supporter of Miller vs. Wilfong, a case which holds, that family court attorneys can get paid their hourly rate – and still pretend they’re working pro bono.

Back in 2001, MacDonald was given a letter of private reprimand by the State Bar of Nevada for violating Supreme Court Rule 158(1).  MacDonald had entered into a short-term loan with a client and failed to repay the loan on time.  This is an error in judgment – because attorneys should not be borrowing money from their clients!

After demand was made for repayment – coupled with MacDonald’s inability to repay the loan – the client filed a grievance with the Nevada State Bar.  Ultimately, the loan was repaid in full, with interest.  And this is what led to the letter of private reprimand.

And then, in 2009, due to business failures in the fast-food industry, as well as failed real estate dealings, MacDonald declared bankruptcy.

We reviewed MacDonald’s Contributions and Expense reports on file at the Secretary of State, and here’s what we found:  MacDonald has several notable campaign contributors including the Committee to Elect Keith Pickard, attorneys Mark and Randall Jones, and the Thomas & Mack Co.  Most folks know that Keith Pickard is a State Senator, and his wife Margaret Pickard is a hearing master in family court—who is now judge-elect.

Notably, Policy Communications is NOT a corporation, it’s merely a “dba” for David V. Thomas, who coincidentally is the husband of Judge Nancy Allf.

Veterans In Politics International (VIPI) obtained the video that exposed Rena Hughes and we posted it on YouTube.  But we must’ve hit a nerve because we received death threats for posting it.  The anonymous death threats insisted that we remove the video.

We ignored the death threat and contacted the mom – who also filed a complaint against Rena Hughes.  Then VIPI filed another complaint.  VIPI flew the mom up to Reno.  VIPI paid for the mom’s transportation, food, and lodging to appear at the hearing.  And then we made a media request to record the hearing.  We posted all five (5) hours online on YouTube.  We kept the issue in the public eye.  And ultimately Rena Hughes was defeated at the polls.

In the primary election, MacDonald captured 37% of the vote, while 36% went to Dee Butler, and incumbent, Rena Hughes came in third place — defeated.

Butler would be a refreshing addition to the Eighth Judicial District Court Bench!