You are here: Home / Endorsement Interviews / A CORRUPT JUDGE IS A GREAT VERMIN!!

“A corrupt judge is a great vermin, the greatest curse ever to afflict any nation.” – Chukwudifu Oputa, Nigerian Supreme Court Justice. 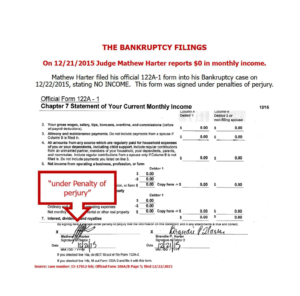 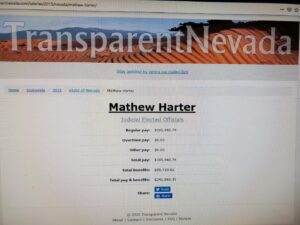 On the issue of crooked judges, one hears a lot about Mathew Harter – one of the most hated and maligned judges in Las Vegas family court HISTORY.  Many parents believe Harter is the personification of evil.  We’ve heard twice-told tales of how Judge Harter is a sadist!  Apparently, he derives gratification inflicting pain and suffering on parents by taking away their children.  Harter is described as cruel, vengeful, and psychotic.

DOWN the RABBIT HOLE

When Harter filed bankruptcy, (Dec. 21, 2015), he also filed a form called “122A-1”.  Federal courts use this form (122A-1) to determine whether a person is eligible for bankruptcy – and debt forgiveness.  So, what makes a person eligible for bankruptcy?  Well, the debtor must actually be in debt – with total debts sufficiently greater than total income and assets.

As a general rule, a person is not eligible for bankruptcy if that person makes too much money or has too many assets – in relation to his or her total debt owing.  Bankruptcy is intended for the “honest debtor,” which means that bankruptcy is intended only for folks who are “honestly broke.”  But wait a sec—was Harter “honestly broke” back in 2015?  For goodness’ sake, Harter was a judge back in 2015 when he filed bankruptcy.  He received salary + benefits worth well over $200k.  So, how the hell is he “broke?”

On the day he filed BK, (Dec. 21, 2015), Harter also filed his Form 122-A1, which federal court clerks used in determining whether Harter was sufficiently “broke” to proceed in bankruptcy court.  Naturally, one has to report their income on these forms.  So, how much income did Harter report? … (wait for it) … ZERO!  That’s right, Harter’s federal bankruptcy form (122-A1) says that Harter had $ –0– income!—but how can this be?—when Harter, at the time, was gainfully employed as a Clark County judge?  What the heiffing hell is going on here? According to Transparent Nevada in 2015 Harter made total pay & benefits $241,860.35.

Note that bankruptcy debtors sign these forms under penalty of perjury.  In the Great State of Nevada, it’s a crime to give false attestation under penalties of perjuries and the same under federal law.  But here comes Harter, a gainfully employed civil servant, who told the federal court that his income is $ –0–.

Doesn’t the Nevada Code of Judicial Misconduct require honesty-in-fact from the judiciary?  Better buckle-up.  This is gonna be one helluva bumpy ride!

Basically, Harter was allowed to proceed in bankruptcy court because his debts presumably outweighed his income – but Harter reported an income of $ –0–, which helped ensure that he was sufficiently “broke” to be eligible for bankruptcy court.  By reporting zero income, Harter was trying to make himself appear more broke-ass than he really was!  Obviously, the federal court relied on Harter’s representation – of zero income – when they decided to allow Harter to proceed – and ultimately enjoy debt forgiveness.

There is a 5-year statute of limitations on BK fraud, which for Harter, runs-out on Dec. 21, 2020 – some three (3) months away.  But Harter is now busted.  This matter was today communicated to the attention of the U.S. Trustee – to whom we submitted evidence for investigation concerning fraud and perjury – and the matter was immediately escalated by the U.S. Trustee. 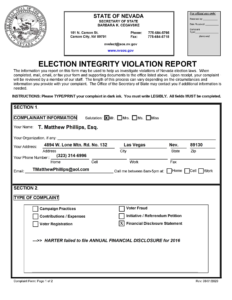 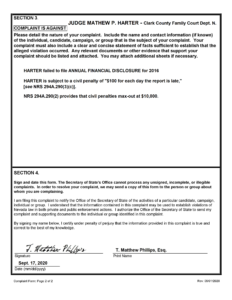 Now that he’s been busted-out, will Harter actually file his 2016 Financial Disclosure Statement with Sec’y of State?  And, when he does, will he claim that he had zero income in 2016?—like he told the feds in bankruptcy court?

When Harter actually files his 2016 Financial Disclosure Statement, will he mention the $330,000 house that he received in 2016?  Curiously, just a few months after filing for BK, a person called “Michael L. Bolton” quitclaimed to Harter a house worth $330,000.  More curious still, Harter never told the bankruptcy court that someone gave him a house – free ‘n clear – during the pendency of his bankruptcy! (See article Judge Committed Fraud on Bankruptcy Filings! https://veteransinpolitics.org/2019/12/judge-committed-fraud-on-bankruptcy-filings/).

Crooked family court judges are a scourge.  They, burden and oppress good families – to whose plight these judges remain utterly indifferent.  But note—a wise woman once said: “Corrupt judges always leave behind remnants of corruption.”  Let the word go far and wide – if YOU are a corrupt judge, WE will find your remnants!—we’re gonna catch you!!

There is today a popular movement afoot in Las Vegas — to throw off the yoke of tyrannical judges.  We demand a fair judiciary!  We are committed to removing corrupt judges from the bench.  In this endeavor, we shall not fail. 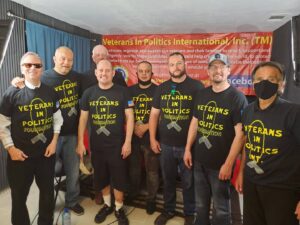