You are here: Home / Endorsement Interviews / MAN with NO FAMILY for FAMILY COURT JUDGE?

Jason Stoffel is running against Nadin Cutter for Family Court Judge, Dept. “T.”  So, who is Jason Stoffel?  Is there any truth behind the storied myths?  Well, Stoffel is a family court lawyer who wants to get elected—really badly!

How badly?  Let’s put it this way: Jason Stoffel wants to be elected—by a factor of approx. 150,000 times more than Fred C. Page wanted to be elected!  Get it?

Eager candidates, such as Stoffel, will shell-out $150k, cruising’ in their Lambo, in their savage quest for a judgeship, while more dozy candidates, such as Page, spend zero because, well, some folks will do just about anything as a favor for Mary Perry!  Wouldn’t YOU?

Imagine, if you will, a judicial race featuring Stoffel vs. Perry?  Okay, who would win? 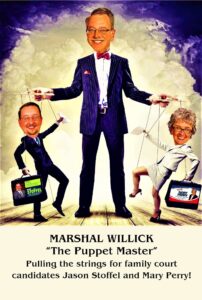 But we digress.  Back to our regularly scheduled programming.

No, there is nothing wrong with your television set.  Do not attempt to adjust the picture.

According to Stoffel, experience cannot be purchased!  Thank you, Mr. Stoffel, for your words of wisdom!  Okay, maybe you can’t purchase experience, but who knows? —maybe you CAN purchase a judgeship!  Right? Is $163k enough to get elected?

Our Investigative Team uncovered the fact that Stoffel donated more than $150,000 to his own campaign and loaned another $13k more!  That’s one year’s judicial salary already spent!

The prevailing wisdom is that judicial candidates should contribute—to their own campaigns—in sums equivalent to the value of their personal use vehicle.  Based on Stoffel’s hefty campaign contributions, it’s safe to say that Stoffel likely drives a gently used Lambo, which makes sense for a guy who lives in a modest single-family home in the high $300s.  Right?!  (“Go I-Team!”)

But why would a candidate spend a year’s salary to get elected?  Do Vegas judges receive undisclosed consideration?  And what about the rumored duffle bags?

Rumor around the campfire is that Vegas family court judges expect family court lawyers to pay tribute with duffle bags full of cash—to grease the wheels of justice!

At Veterans In Politics International (VIPI), we love rumors!  Facts can be so misleading, where rumors—true or false—are often revealing.  Ya know?

But is there any truth to these rumors?  If you’re a family court judge—and you have information on the rumored duffle bags, please contact VIPI discreetly.

Our Investigative Team is left wondering whether Stoffel has secret campaign contributors.  If Stoffel wants to spend $163k on his own campaign, then that’s cool, but why does he drip-feed the contributions?

Remember, Stoffel didn’t just plop-down $163k all at once.  Instead, he broke it up into 71 installment payments!  But why?

Why would Stoffel drip-feed money into his campaign? Why not just write one check for like $163k, call it day, and then have some Cadillac Margaritas?

By drip-feeding money into his own campaign coffers, the inference to be drawn, of course, is that Stoffel is donating money on behalf of OTHERS, which of course, is illegal.

Most troubling, Stoffel has no children…yet he wants to be a family court judge.  And the question thus arises:  how is Stoffel going to act in the “best interests of children”—when he has no children of his own?

We believe that family court judges, in order to be properly qualified, must themselves be parents—who have raised children of their own.

Perhaps most frightening, Stoffel is eerily reminiscent of (former) Judge Rena Hughes.  Both have no kids!  Which makes for a horribly ugly family court judge!  Where judges are childless, they tend to traumatize children from the bench, just like Rena Hughes traumatizes children that cost her the bench!

Here, the fact that Stoffel is childless is an automatic disqualifier!

Mr. Jason Stoffel is married to a woman named Ms. Amanda Roberts.  However, this is a fact Stoffel keeps secret.  But why?  After all, Stoffel and Roberts are partners in the Roberts Stoffel Family Law Group.  So why all the mystery?  What is Stoffel hiding?   And why is he hiding it?

Stoffel is a ladies’ man.  And then some.  His prowess with the opposite sex is the stuff of which legends are made.  Not quite Wilt Chamberlain, but still, impressive.

We at VIPI admire Stoffel’s skillful pickup lines—which hook the females every time!  Somewhat of a male coquette, Stoffel is a true silver-tongued devil, which makes him a great “advocate,” however, this is not the most compelling qualification for judges, who are supposed to be “neutral,” and “non-biased” — not “advocates.”

Is Stoffel about to divorce his wife?  Is Stoffel going to wait until after the election—and then announce a divorce from Roberts?  Just like Rena Hughes did?  And, is this why she’s an angry ball of emotion – just like Stoffel?

Both Stoffel and Hughes believe that childless lawyers can be family court judges!  But what are the odds?  (No, don’t ask Dave Thomas!)  Our Investigative Team pounded the streets of downtown Vegas to explore the innuendo and rumor that swirls around the Stoffel-Roberts marriage; however, we found nothing.

Our Investigative Team attempted to reach Stoffel by telephone, but at the time of the writing, Stoffel declined to comment.  What could he be hiding?  And why is he hiding it?

THE STRANGE WORLD of JASON STOFFEL

Stoffel:  “You really find out why these kids are doing drugs, why they aren’t going to school, why they’re having sex.”  Okay, stop right there!  Kids having sex?!  Yeah, Stoffel’s statement feels kinda, sorta out-of-context, but why is Stoffel talking about kids having sex in the first place?  How did Stoffel come to learn about these kids having sex?  This is just awkward, to say the very least.

For goodness’ sake!  Help kids plant a garden!  Teach ‘em how to recycle!  But don’t be discussing why kids are having sex.  It just sounds questionable!!  Just saying’!

We couldn’t resist going down the Stoffel rabbit hole.  So, why are kids having sex? —according to Stoffel, “A lot of the time, it’s poverty.”  Yeah, we didn’t see the connection either.  How is this guy, Stoffel, even qualified to be a judge?

As to why children don’t go to school, Stoffel explains, “People don’t go to school because of the way they’re dressed.”  Um, okay!  Don’t keep us in suspense, Jason!  Why do people go to school?  Stoffel carries on: “Some live 1.9 miles away and don’t qualify for a bus.”  Okay, this is just too weird.  Could the 1.9 be coded data concerning Covid-19?

Folks, we needn’t say the obvious—Jason Stoffel is NOT right for Family Court judge!  Happily, there is a solution! —a fresh alternative!!  Vote Nadin Cutter for Family Court Judge Dept. “T.”

THE HEAT is “ON!” – PRESIDENT of VETERANS In POLITICS SUES METRO PD!What you don’t know about Medicare Benefits

THE COUNTDOWN to SUPER TUESDAY is ON!!