You are here: Home / Home - Featured / THE HEAT is “ON!” – PRESIDENT of VETERANS In POLITICS SUES METRO PD! 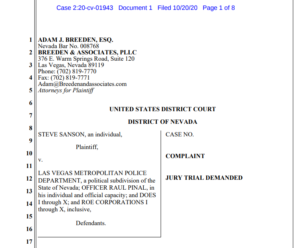 Sanson’s lawsuit alleges a violation of the Second, Fourth, and Fourteenth Amendment rights. 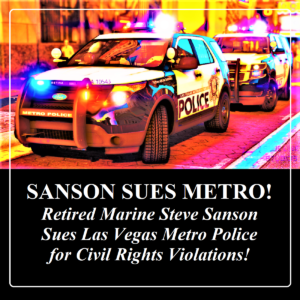 According to official court documents, on March 22, 2019, at 11:30 a.m., SANSON left the Clark County Family Courthouse—when he was pulled over almost immediately!  Stop right there.  Could it be that Metro Police were “stalking” Sanson?  Hmm…

According to Sanson, Metro Police had foreknowledge of Sanson’s physical presence at family court—situated at Pecos & Bonanza.  It’s worth noting that the Metro Officer pulled-over Sanson approx. one-quarter mile from the family law courthouse.  Coincidence?

SANSON contends that LVMPD acted without PROBABLE CAUSE—thereby violating his constitutional rights—under the Second, Fourth, and Fourteenth Amendments—in all the following ways—

Sanson’s lawsuit also alleges that LVMPD knowingly, and with deliberate indifference to the Constitution, maintains policies and procedures that fail to properly prepare officers for traffic stops—such as the one with Sanson on March 22, 2019.

Sanson alleges that LVMPD fails to adequately train officers on Second, Fourth, and Fourteenth Amendment requirements for traffic stops as well as constitutional limitations on search and seizure.

The LVMPD Officer failed to clear Sanson’s weapon, you can clearly see in the video that the magazine was still in the weapon and the officer chambered a round after Sanson warned him not to.

Arizona v. Gant, [556 U.S. 332 (2009)], is a U.S. Supreme Court decision holding that, in order to justify a warrantless vehicular search after an arrest, the Fourth Amendment requires police officers to demonstrate: (i) a threat to their safety posed by the arrestee, or, (ii) a need to preserve evidence from tampering at the hands of the arrestee.

Here, the fact that the LVMPD handbook is silent as to Arizona vs. Gant tends to suggest that LVMPD fails to properly train its police officers on up-to-date Fourth Amendment policies and procedures.

Sanson is represented by local civil rights attorney, Adam Breeden, (Breeden & Assoc. PLLC).  Mr. Breeden is a well-respected trial lawyer with an eye for detail; he has a reputation as an earnest and forthright advocate in the tradition of Johnny Cochran.

We tried to interview Mr. Sanson, and he politely referred us to his lawyer, Mr. Breeden.  But Mr. Sanson did volunteer a brief statement:  “First of all, I am in the very capable hands of Mr. Adam Breeden; second, our lawsuit speaks for itself; third, our claims do have merit, and fourth, I am confident the court will validate those claims.”

Sanson added: “I wish to say thank you to all the well-wishers for their continued support.”

Stay tuned for all the excitement!  We are your official headquarters for news ‘n information on the important public interest lawsuit, Sanson vs. LVMPD!

Click onto each video to have a complete understanding of all violations:

BILL GONZALEZ: NO FRIEND to MEN & WOMEN SERVING in UNIFORM!MAN with NO FAMILY for FAMILY COURT JUDGE?