You are here: Home / Endorsement Interviews / BILL GONZALEZ: NO FRIEND to MEN & WOMEN SERVING in UNIFORM! 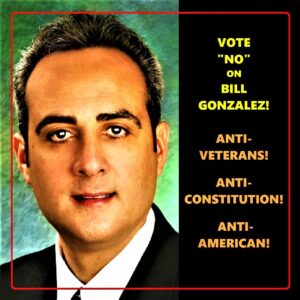 Gonzalez can be summed up in one word: “Letizia”.  We wondered whether Gonzalez hired a “fixer” and sure enough, we see Letizia’s name in the contribution and expense reports.

Our I-Team learned that Gonzalez donated over $36,000 to his own campaign and then donated over $30,000 to Letizia.  But it begs the question: what does a political consultant actually “do” in a non-political election contest?  Yeah, we couldn’t figure it out either!

Yes, you guessed correctly!  This is a classic duel of LETIZIA vs. THOMAS squaring-off in the Octagon!  The only issue is who extracted more blood money out of which gullible candidate?  Stated another way: Gonzalez gave over $30,000 to Letizia!  The only question left is: how much did Throne give to Thomas?

SIDEBAR:  Remember Heidi Almase?!  Who could forget?!  She was paying Thomas a steady retainer, and then one day, Almase gets an email from Thomas—demanding $30,000.  You may have seen this in the UFC highlight reels!  It was a cold-blooded demand for payment!  Poor Heidi couldn’t pay it!  With no dough on the table, Thomas dropped Almase like a cocaine habit!

All tolled, Dawn Throne donated over $134,000 to her own campaign and donated over $108,000 to David V. Thomas.  Throne also donated to three (3) other Policy Communications, with slightly different addresses, in the amounts of $2,500, $500, and $1,250—for a grand total of over $112,000 to David V. Thomas and his multitudinous subsidiaries within the Policy Communications Empire.

David V. Thomas received $112k compared to Letizia’s measly $30,000.  In Vegas, non-political election contests are decided based only on who spends the most money on “political” consulting!

Moral of the Story:  Don’t bother voting for Gonzalez.  He hasn’t got a chance.

Gonzalez wants to become a judge again for one reason only:  to get a pension.  Gonzalez was a judge for only six years, so he needs four more years to get his pension.  This is the ONLY reason Gonzalez is coming back!  To get a pension!

Steve Sanson’s focus on Family Court corruption started back in 2014 when Family Court Judge Bill Gonzalez refused to honor federal law, Soldiers’ and Sailors’ Civil Relief Act, which requires court actions to be “stayed” (stopped) while a member of the armed forces is deployed on official duty overseas.

Remarkably, Judge Gonzalez ignored this important federal law, and actually ordered soldiers who were deployed overseas in combat to appear in his courtroom!  When they failed to appear, Gonzalez ruled against them!

Bill Gonzalez is NOT a friend to hard-working men and women serving in uniform overseas.  Bill Gonzalez must not be elected to the bench.  All branches of the military share the same interest in defeating Bill Gonzalez’s bid for a judgeship.

Judge Gonzalez once ruled that a 100% Service-Connected Disabled Veteran is willfully unemployed, despite being deemed unemployable by the Department of Veterans Affairs—after years of medical exams, therapy, and evaluations by doctors.

Gonzalez ruled that the Veteran’s disabilities were for “carrying guns and military equipment in the Army,” and had no relevance to civilian life, therefore the Veteran was deemed “willfully” unemployed.  Gonzalez refused to modify the Veteran’s financial obligations, which put the Veteran at risk for homelessness.

While judges may bring certain biases to the bench, they need to do their job and rule on the facts of the case.  But Judge Gonzalez over-stepped his boundaries, substituting his own personal opinions for the facts.

The Federal Government deemed this Veteran to be disabled based on substantial medical information.  But Bill Gonzalez went rogue and ignored the facts of the case!  Gonzalez substituted his own personal discretion for black-letter law.

Most troubling, Judge Bill Gonzalez caused a Veteran to commit suicide.  Gonzalez presided over a divorce and custody battle between a Veteran and his wife of 18 years (with two children). The Veteran had limited income, but he did his best to fight for custody of his children.  The Veteran sought to compel Judge Gonzalez to enforce the custody and visitation orders that were in place.  But the mother kept denying the Veteran his fair time with the children, which cost the Veteran thousands of dollars in legal fees to appear before Gonzalez to ask him to enforce the orders and to hold mom in contempt.

Judge Gonzalez refused to hold the mother in contempt and the mother continued to forbid contact between the Veteran and the children.  Gonzalez would not enforce his own court order.  This caused severe depression and financial problems for the Veteran.

After countless motions that were never enforced by Gonzalez, thousands of dollars in legal fees, and depression from not seeing his own children, the Veteran committed suicide.  (RIP, brother.  You are not forgotten!)  [See Case No. D-11-450187-D]

Thanks to Gonzalez, now the children have to wonder why they are growing up without a Dad.  Gonzalez’s conduct in this case was inexcusable.  It’s a moral outrage!

Judge Bill Gonzalez has violated the Servicemember’s Civil Relief Act, and Nevada law, by refusing to allow an active-duty airman to perform his service to our country without the fear of losing custody of his child.  Gonzalez ruled that if the airman leaves for more than 72 hours for any military-related duty, he will forfeit custody of his child.  However, the mother has no such restrictions and is free to leave the area for any need at any time she wishes.

Gonzalez violates federal laws, as well as state laws that have been adopted to protect the service of our men and women in our Armed Forces.  Does Judge Gonzalez even know about NRS 125C.0659?  The Nevada Legislature actually codified protection for our men and women serving our country in the United States military.

Gonzalez is a bad apple!  Judge Bill Gonzalez ruled over a divorce and custody case where another airman was divorced, and his civilian ex-wife remarried.  Once she had remarried, the airman naturally filed a motion to stop the alimony payments, but Gonzalez denied that motion!  Gonzalez continued the payments and ordered attorney’s fees against the Airman for filing the motion! Those attorney fee judgments are also ordered to be garnished from the airman’s pay instead of through the procedurally correct debt collection set forth by federal law.

Additionally, Gonzalez held a private hearing with the ex-wife to issue permission for her to get a passport for the minor children, without notifying the Veteran of the hearing!  This violates the rules of ex parte communication!  Gonzalez afforded the Veteran no procedural Due Process and no Notice of Hearing nor opportunity to be heard!

The ex-wife has dual citizenship in another country and holds the ability to leave and take the children at any time, further alienating the Veteran from his children.  How is that in the children’s best interest?  How does that protect the Vet’s constitutional rights?

Then there was the Marine who had sole custody of his child because the biological mom lived in California and had no contact with the child.  The Marine was deployed to Afghanistan, so he sought to have his mother care for the child during deployment.

The biological mother learned of the deployment, came to Las Vegas, and filed for custody of the child. Instead of following the Serviceman Civil Relief Act (SCRA) and issuing a Stay of actions in the case, Gonzalez moved forward with a custody hearing in the absence of the Marine, who had to hire a lawyer to appear for him.  Gonzalez ordered the Marine to appear by phone for the custody hearing, but the Marine was in a firefight (a life or death situation defending our country in combat) and could not do so.

Gonzalez asked his attorney to inform the Marine to drive to a different base that was not engaged in a firefight so that he could appear by phone.  Gonzalez is just ridiculous!  Combat is difficult enough!  Gonzalez just makes it worse!

But the point is this: Clark County can do better!  Just say NO to “Gonzalez!”  We at VIPI have an obligation to inform the public about the dangers of Bill Gonzalez.

Bill Gonzalez is a prolonged insult to every American man and woman serving in uniform—past, and present!

The Welfare of Children is the Same Excuse that All Tyrants Give!THE HEAT is “ON!” – PRESIDENT of VETERANS In POLITICS SUES METRO PD!