You are here: Home / Home - Featured / The Welfare of Children is the Same Excuse that All Tyrants Give! 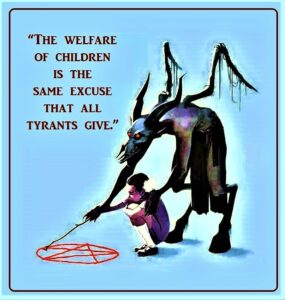 Legally speaking, which interest is more important? — (1) the best interests of the children? —or (2) the constitutional rights of the parent?

BEST INTERESTS of the CHILDREN?

Today in Las Vegas, Nev., too many family court judges rely only on the “best interests of the children” standard when making custody determinations, while they ignore the fundamental rights of the parents!

Parenting is a fundamental right, [NRS 126.036]; in contrast, the “best interests of the children” is not.

Note: NRS 126.036 neither commands nor forbids any conduct.  It’s simply a declaration of public policy.  It’s Carson City’s way of saying: “Parenting is a right of constitutional magnitude.”  This means that judges may not strip litigants of custody based only on the judge’s arbitrary whims.

Last week, your humble narrator had a custody hearing—and despite my feeble railings—the Marxist family court judge NEVER acknowledged NRS 126.036!  That’s like arguing a freedom of speech lawsuit before a judge who never acknowledges the First Amendment!  Ya know? (Srsly!)

Most alarming, the “best interests of the children” standard has become a propaganda slogan of radical judges who wish to create a “parentless society.”  It’s a sinister plot to control children!  This agenda is now in full swing in Vegas—where Marxist family court judges broadly exercise personal DISCRETION—randomly deciding what’s in “the best interests of the children”—all the while ignoring the constitutional rights of both parent and child.

Family court judges substitute their wisdom and morals for black-letter law—pretending to do what’s in “the best interests of the children”—basically making it up as they go.

Judges predictably put the screws to one parent—by wrongfully taking away custody.  Judges do this to heighten the conflict—to generate more revenue for Divorce Court, Inc.  It’s all about the money; (nobody really gives a damn about the children’s interests just ask Judge Rena Hughes…).

One need only watch the tape of that deplorable person, Rena Hughes!  She threatened to put a 12-year old in jail!  Yes, it shocks the conscience!  But the most shocking part is how Hughes is utterly devoid of any human emotion!  It’s not as if Hughes has a malignant heart; she has no heart at all! (Click onto video Deplorable actions by Family Court Judge Rena Hughes against a minor child Part 3-3 https://www.youtube.com/watch?v=7Gg-_y2Xjvs).

On the record, Rena Hughes claims she is acting in the “best interests” of the minor child – but anyone watching the videotape sees a stone-cold megalomaniac torturing a 12-year old child on behalf of Divorce Court, Inc.

Hughes tells the little girl: “I’ve made a decision for your best interests.”  Wow!  (Did you catch it?)  The judge said the magic words—“best interests”—which apparently gives judges free reign to make it up as they go, willy-nilly revoking custody—just because they can!  (Click onto the video Deplorable actions by Family Court Judge Rena Hughes against a minor child Part 2-3 https://www.youtube.com/watch?v=bsDah-cz1uc&t=51s).

RIGHT to be PARENTED

That 12-year old child suffered blunt force trauma—at the hands of Rena Hughes—who stripped away the poor child’s “right to be parented.”  Hughes’ decision to strip away the parent left the child gripped in mortal panic.  How could we expect anything different from a person who has “NO children”?

Most terrifying, Hughes’ decision to separate parent from the child was based only on her personal DISCRETION—nothing to do with black-letter law!   (This could happen to YOU! —or a loved one!)

Remember, Rena Hughes is not an exception; she represents the “new normal”—emotionless judges who sever familial bonds as casually as any slave auctioneer back in the day – in good Ol’ Dixie!  And just like slave auctioneers from yesteryear, today’s family court judges lack any semblance of humanity.

TELL ME MORE ABOUT ‘BEST INTERESTS’

That 12-year old girl faced a judge with no empathy nor compassion.  In a heart-stopping moment, the 12-year old girl uttered what may be the truest words ever spoken in the history of Clark County courts!

After being stripped of her fundamental “right to be parented”—and being told it’s (supposedly) in her “best interests” NOT to see her own mother—this remarkably brave 12-year old replies to the judge: “How do you know my best interests? You don’t know me!” …. Wow!! Exactly!!

We stand in solidarity with the 12-year old girl who had the miraculous presence of mind to stand up to a cold-blooded, anti-social judge.  “You don’t know me!”  That smug judge knows nothing of that child’s “best interests”; family court judges know but one thing, i.e., how to create more discord—to prolong the conflict—to generate more revenue for Divorce Court, Inc. This cost Judge Rena Hughes the power of the bench!

In Vegas, back in the early 2000s, the family court incumbent elite figured out that, if they hold the kid’s hostage, they can squeeze every last dime out of traumatized parents who lose custody.  So too, the winning parents will spend their last dime to validate the random, lucky decision granting them sole custody.

With its kidnapping strategy in place, the incumbent elite would earn record profits for Divorce Court, Inc.  Central to their business model is the notion that judges must have unfettered discretion to kidnap children, at will, based only on their subjective whims—ostensibly, in the children’s “best interests.”

WHO SHALL RAISE the CHILDREN?

In Las Vegas, family court judges believe that, once a divorce case is filed, parents automatically consent to their children becoming wards of the State.  Family court judges argue that the State knows what’s best for YOUR kids.  But this is totally unconstitutional!  Totally un-American!  Totally unacceptable!

We believe the State has no business raising our children.  It’s not the State’s job to raise the children—except maybe in China and North Korea!  But this is still ‘Murica!

Where infidel judges ignore the constitutional rights of parents (and children), there is most certainly an abuse of discretion.  Instead of following black-letter law, wild-eyed judges make random decisions about what they subjectively believe is in “the best interests of the children.”

CUSTODY HEARINGS are a FUNDAMENTAL RIGHT

To make matters worse, family court lawyers SEAL their clients’ cases—not for the clients’ privacy—but to keep the judges’ and attorneys’ conduct hidden from public scrutiny!  However, the Nevada Supreme Court has already said that a lawyer’s courthouse statements are issues of public concern.  Just ask Jennifer Abrams—who will soon pay hundreds of thousands of dollars to a retired Marine’s lawyers, who proved that a lawyer’s courthouse statements are indeed matters of public concern.

Let’s revisit Jennifer Abrams, an attorney fond of sealing cases.  Jennifer Abrams is a managing lawyer at a “boutique” family law firm!  (Boutique?  Um, okay…) for a most revealing peep behind the curtain, visit Abrams’ website, which explains the current state of marital law in Nevada:  “It surprises some, but marital law is far from clear-cut. It’s actually fraught with legal gray areas.”  (Legal gray areas?  Wtf?)

Jennifer Abrams wants YOU to believe that the law is complicated with “legal gray areas”—so she can bamboozle YOU out of all your money!  Gray areas?  Truth is, marital law is carefully controlled by statute—it’s just that judges and lawyers wish to promote conflict—to generate more revenue—so they pretend the law is “fraught with legal gray areas!”  (It’s not!)

Don’t forget, Jenny Abrams is the ding-dong lawyer who filed a frivolous defamation lawsuit against a retired Marine!  Jenny lost in the trial court and the Supreme Court!  “OO-rah!”  (Hey, Jenny! —burns going’ down! —don’t it?!)  For the final cherry on top, Carson City rejected Jenny’s appeal along with her tiresome attempts to reconsider her pasty drivel.

The War on Parents must stop!  We need judges and lawyers who understand that the constitutional “right to parent” is paramount to the “best interests of the children” standard—which varies from judge to judge—and invariably leads to gross abuses of discretion! 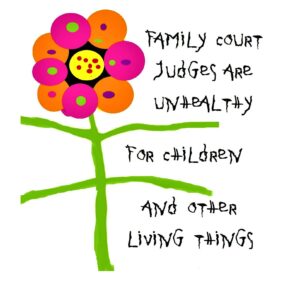 Just remember, every time you sue a corrupt family court judge, it betters the human race by a distinctly measurable margin and the world instantly becomes a better place – for children and other living things.

Please join us in our fight for a fair judiciary.  In 2021, Carson City lawmakers will consider our proposed assembly bill to REMOVE or RETAIN family court judges who run unopposed— 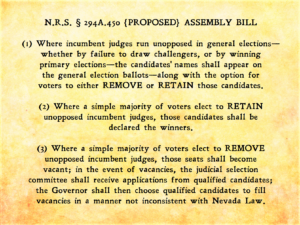 (1) Where incumbent judges run unopposed in general elections—whether by failure to draw challengers or by winning primary elections—the candidates’ names shall appear on the general election ballots—along with the option for voters to either REMOVE or RETAIN those candidates.

(2) Where a simple majority of voters elect to RETAIN unopposed incumbent judges, those candidates shall be declared the winners.

(3) Where a simple majority of voters elect to REMOVE unopposed incumbent judges, those seats shall become vacant; in the event of vacancies, the Nevada Judicial Selection Committee shall receive applications from qualified candidates; the Governor shall then choose qualified candidates to fill vacancies in a manner not inconsistent with Nevada Law.

Please forward our proposed bill to your assemblyman, assemblywoman, state senator, and the Governor! Our proposed bill will minimize corruption in judicial elections! Share widely!  😊

THE COUNTDOWN to SUPER TUESDAY is ON!!BILL GONZALEZ: NO FRIEND to MEN & WOMEN SERVING in UNIFORM!