You are here: Home / Home - Featured / “ONE IN THE CHAMBERS” 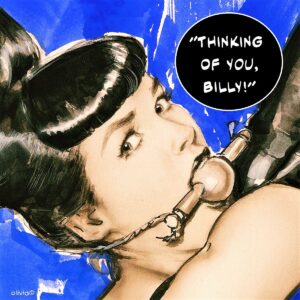 Okay, so, what on earth did Judge Potter do that got him into hot water?  Buckle-up!  Get ready for a white-knuckle, adrenaline-fueled, thrill-ride!

‘WHAT HAD HAPPENED WAS’

Apparently, Judge Potter one day walked into Judge Bell’s chambers – when Judge Bell was not present.  Okay, stop right there.  Why is Judge Bell’s office door unlocked in the first place?  Srsly?  Doesn’t Judge Bell have sensitive documents in Her Honor’s office?  Un-locked judicial chambers are bona fide issues of public concern.  Where judges carelessly leave chambers’ doors unlocked, it does not “promote confidence in the judiciary,” [see NCJC Canon No. 1, Rule 1.2].

It is important to note that Judge Potter is a family court judge, whereas Judge Bell is the Chief Judge for Clark County district courts.  Note also, Judge Potter is retiring in Jan. 2021—so it seems doubtful a future Commission decision would benefit the public in any meaningful way.

Okay, back to our story.  Judge Potter one day enters Judge Bell’s chambers, which were carelessly left unlocked.  Judge Potter finds himself all alone in Judge Bell’s chambers; but rather than wait for Her Honor’s return, Potter apparently felt comfortable to leave for Bell some items that some may see as provocative.  On Judge Bell’s desk, according to the Statement of Charges, Judge Potter left a “patch.”  Again, stop right there!—what kind of “patch?”—a cloth patch that is sewn onto jean jackets?—or a Pirates of the Caribbean patch that disabled pirates wear on one eye?  What kind of “patch” are we talking about?

Apparently, the patch says, “Gag Order, Esq.”—and features an image of a man with a ball-gag in his mouth.  “Whiskey, Tango, Foxtrot?!”  Further, the Statement of Charges alludes that the gagged man pictured on the patch resembles Judge Potter.  But, wait a sec, what does it all mean?  Is Judge Potter symbolically protesting some gag order, i.e., a “prior restraint on free speech,” that Judge Bell issued against him?  [See, e.g., Near v. Minnesota, 283 U.S. 697 (1931); (“prior restraints”).

‘THINKING of YOU, BILLY’

In addition to the “Gag Order, Esq.” patch, Judge Potter also left for Judge Bell a note that reads: “Thinking of you, Billy.”  However, based on the way the Statement of Charges is written, the reader cannot know which judge authored the note, Judge Potter?—or Judge Bell?

MORE to the STORY?

Does the Statement of Charges suggest that Judge Potter was proposing an intimate liaison with Judge Bell?  Is Judge Potter inviting Judge Bell to put a ball-gag in His Honor’s mouth?—while Does Judge Bell crack the whip-like Bettie Page?  If so, this would be completely inappropriate and worthy of an EEOC complaint.

First of all, where does one purchase a “Gag Order, Esq.” patch?  We found none for sale on eBay!  Is this a custom-made ball-gag Esquire patch?  (Asking for a friend.)  Just when you thought it was safe to go back into the water!—a ball-gag patch suddenly appears on your desk—after you leave your office unlocked!  Srsly!

Are we being told all the facts?  Is the public to believe that Judge Potter randomly did these insane-sounding acts?  If Judge Potter really did the alleged acts, then either: (a) he’s completely insane, or (b) there’s an undisclosed familiarity between Potter and Bell.  Why does Judge Potter feel so comfortable leaving provocative ball-gag patches for Judge Bell?  And how does Potter have open access to Bell’s chambers in the first place?  Does Judge Bell leave a key for Judge Potter under the mat?

If there is an undisclosed familiarity between Potter and Bell, will Potter introduce the same in his own defense?  Could it be that this ball-gag routine was just part of the normal banter between Potter and Bell?  Perhaps Potter became too comfortable with this banter?  Perhaps Potter crossed the line by widening the scope?—distributing ball-gag patches to staff?  Perhaps staff members filed an EEOC complaint and Judge Bell now must take a stand against what was formerly familiar banter between Her Honor and Judge Potter?  Remember, Potter is married with children, four to be exact, which means Judge Potter’s hands may be tied defending himself.

Of course, all our musings are wild speculation.  But that’s only because there are just too many unanswered questions raised by a poorly pleaded Statement of Charges (written by Thomas C. Bradley, Esq.).

It seems this whole affair is a private, employment-related incident between the Chief Judge and an inferior judge.  This is not the proper subject of a judicial complaint.  The aggrieved parties, if they are aggrieved, most certainly have adequate remedies at-law, (i.e., they may sue for money damages).

According to the Statement of Charges, Judge Potter violated the Nevada Code of Judicial Conduct, including Rule No. 1.1 – “failure to comply with the law”; Rule No. 1.2 – “failure to act in a manner that promotes public confidence”; Rule 2.3 – “harassment”; Rule No. 2.8 – “failure to maintain decorum.”

Judges violate Rule 1.1 where they “fail to comply with the law”; but wait—how did Judge Potter violate the law?  Which law did His Honor violate?  Which civil statute?  Which criminal statute?  The Statement of Charges never says!  Where are the findings of fact upon which the Commission concludes that Potter failed to comply with the law?  This allegation – “failure to comply with the law” – violates Potter’s substantive and procedural due process rights.  Or, did Judge Bell already sue Judge Potter for harassment—and won—but we just don’t know about it?  There are no criminal charges against Potter; so, the question remains, which law did Potter fail to follow?

‘FAILURE to ACT in a MANNER that PROMOTES PUBLIC CONFIDENCE’ (Rule 1.2) 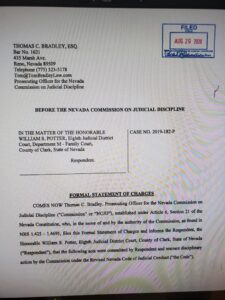 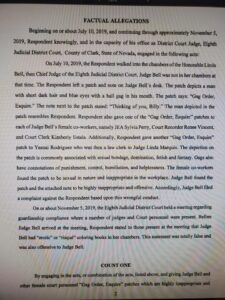 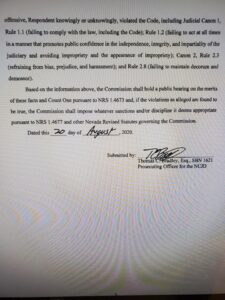 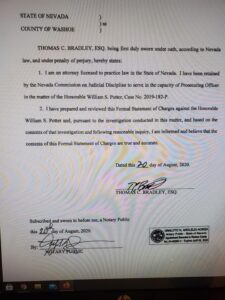 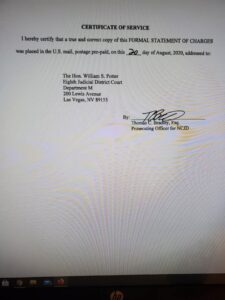 HEART of the MATTER

Truth is, Las Veganites are far more concerned about how judges interact with the public while on the bench—as opposed to how they interact with one another while in chambers.

Why is the Commission litigating this matter?  Srsly!  Assuming Judge ell has evidence against Judge Potter, such evidence should be on file with the Equal Employment Opportunity Commission (EEOC) or the police.  Same with the courthouse employees – assuming they have evidence, file a civil lawsuit.  But this case is inappropriate for the Commission.

Judges violate Rule 2.8 where they lack “decorum.”  Judges must act in a dignified manner and with judicial etiquette.  If it were really true that Judge Potter is distributing ball-gag patches to courthouse employees, then yes, Judge Potter is in violation of the rules of “decorum.”  But what’s the remedy?—training classes?  His Honor’s judgeship is nearly at an end.

What are we not being told?  Based on the thinly-pleaded fact pattern, it may be difficult for we mere mortals to ever know the truth about what really happened, in chambers, between Judges Bell & Potter.

This case concerns “non-public” matters arising out of a judge’s actions with another judge behind the scenes.  But again, folks are far more concerned with how judges act in “public” matters—on the bench.