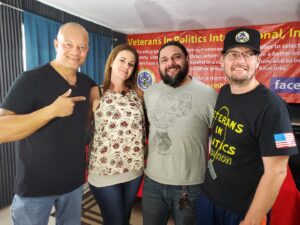 On Sept. 3, 2020, Veterans in Politics International, (“VIPI”), interviewed Bridget Kearns.  Bridget Kearns presents well.  She is a poised and confident woman.  After watching her videotaped interview, one forms the impression that she is forthcoming.

Bridget Kearns has two daughters and three grandchildren.  She has lived in Las Vegas since 1978.  She humbly describes herself as “a very simple person.”

Bridget Kearns claims that on June 2, 2020, there was an incident after a family court hearing; on that day, a divorce decree was granted involving Diana Aguayo and Leonardo (who is Bridget’s current significant-other).  Bridget believes that the family court hearing may have precipitated the incident.

Bridget Kearns’s significant other, Leonardo, used to be married to Diana Aguayo, for whom a divorce decree was issued that day (June 2, 2020).

But there was a dispute that day at Bridget Kearns’ house.  Diana Aguayo had allegedly shown-up at Kearns’ house—despite Judge Henderson’s instruction.  Apparently, Aguayo was upset about the family court matter that went down that day.

When Kearns comes home that day, Kearns sees her 19-year old daughter (who was 7 mos. pregnant) throwing rocks at Diana Aguayo’s vehicle; in response, according to Kearns, Aguayo and her passenger returned the rock volleys.

Bridget Kearns admitted that she exited her vehicle and confronted Diana Aguayo.  In an effort to de-escalate the situation, Bridget Kearns’ significant other, Leonardo, (who used to be married to Diana Aguayo), physically removed Kearns from the confrontation with Aguayo.

And then the unthinkable happens.  In the word of Bridget Kearns: “she (Aguayo) backs her car up, aligns it with our bodies … she floors it, goes over the curb, hits both of us head-on with her vehicle …. We both hit the hood … as she drives through our yard and into the wall of our house.”  Wow!  Sounds frightening! 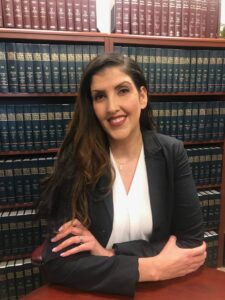 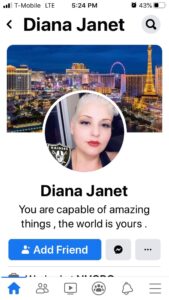 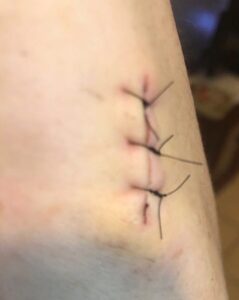 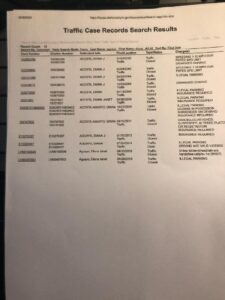 Bridget Kearns’ son-in-law, Hunter, then comes out of the house with a baseball bat and breaks the passenger side window of Aguayo’s car, (the black Dodge Charger), where Luis Gamboa was sitting.

According to Bridget Kearns, Leonardo sees Aguayo brandishing a yellow-handled knife with a lengthy blade that may have been up to 6 inches long (seen by Leonardo).  Aguayo then stabs Kearns – just above the heart.  Aguayo stabs Kearns multiple times on the arms and chest and even on her back.  Kearns later receives medical attention including stitches.  During the assault, Kearns flails at Aguayo and pulls her hair.

According to Bridget Kearns, the assailant, Aguayo, then tells Kearns’ son-in-law, Hunter, “I’m killing you next.”

Ultimately, Aguayo puts the car in reverse, then drives away with the passenger, Luis Gamboa, and also the mom who was caravanning in another vehicle.

Kearns was later advised that Aguayo was apprehended about one block from Kearns’ house.  However, there was no knife in the car; apparently, Aguayo ditched the yellow-handle knife.  (In addition, drugs were reportedly found in Aguayo’s car—but Aguayo now faces no drug possession charges.)

Apparently, Diana Aguayo’s sister, Claudia Aguayo – Asst. City Attorney, City of North Las Vegas – arrives on the scene and speaks to police.  However, this incident occurred in Las Vegas, not in North town, so it would appear that Claudia Aguayo if she were indeed present on the scene, was NOT acting in an official capacity.  If Claudia Aguayo were in fact representing her sister in a legal capacity, it may create a conflict of interest with the NLV City Attorney’s Office.

Bridget Kearns believes that the whole incident was caught on videotape by her neighbor’s security camera; however, the videotape of the incident has suddenly gone missing with no legit explanation.

Bridget Kearns contends that somebody “got to” her neighbor – whose security camera had purportedly captured the entire incident.  Kearns believes her neighbor has been influenced to the point where the videotape suddenly doesn’t exist.

Notably, Bridget Kearns’ 19-year old (pregnant) daughter was given a ticket for throwing rocks at Diana Aguayo, which leads Kearns to believe that the police have actually seen the videotape … which has suddenly gone missing—under conspicuously suspicious circumstances.

Bridget Kearns further contends that Diana Aguayo has had numerous run-ins with the law, but that Aguayo gets a special dispensation from the courts—on account of Diana Aguayo’s sister, Claudia Aguayo, (Asst. City Attorney, City of North Las Vegas).

As a result of the vehicular assault incident, Bridget Kearns now has a restraining order against Diana Aguayo.

Apparently, there is a court date on Sept. 14, 2020, in connection with the incident dated June 2, 2020.  The bail amount on these charges is only $5,000.  Which seems awfully low for alleged assault with a deadly weapon.  Trying to run someone over with a vehicle is a serious offense, which some may view as attempted murder.  And then there’s the stabbing in the chest, just above the heart, which definitely sounds like attempted murder.  So why is the bail only $5,000?  $100,000 bail seems more appropriate, but at least $50,000!  Bridget Kearns believes the bail amount for Diana Aguayo was set way too low for what Kearns, the victim, sees as a very serious offense.

In an open address to the District Attorney, Bridget Kearns states: “I want the truth to be told.  I want justice to be served.”  Stay tuned for more developments.

“ONE IN THE CHAMBERS”Nevada Military Veteran seeks the Clark County District Court Bench!