From Welfare to the Whitehouse 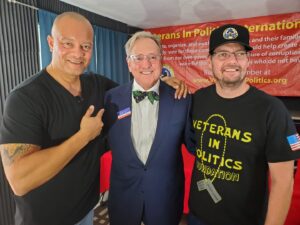 Veterans In Politics video internet talk-show interviewed John Hunt an Air Force veteran now seeks the judicial bench for Clark County District Court Department 18. If elected Hunt would be the second military veteran on the Eighth Judicial District Court Bench out of 58 seats, there are not enough military veterans presiding over our courtrooms.  Hunt owns his own law firm and is familiar with signing the front of a check. Hunt sits as a Pro Tem and Hearing Master he is no stranger to the bench, which he donates his hearing Master paycheck to Three Squares Food Bank. Hunt has been practicing law for over 36 years from Traffic Court to the United States Court of Appeals, Hunt believes that experience in the law matters. Hunt knows what it’s like to be on welfare and he worked his way up to the White House by being on the US Senate staff. Hunt is community-oriented and is familiar with many different walks of life. Hunt is a constitutionalist and believes in following the law. Hunt participated in the appointment process for District Court and he was one of 3 names recommended to the Governor’s office for an appointment.

A country that doesn’t honor its vets is doomed to failure!