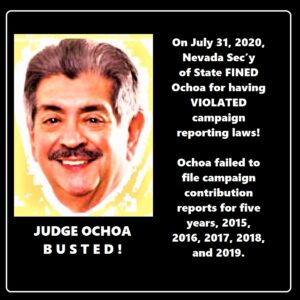 Candidates are required to file annual reports that list “who” gave money to the candidate and “how much” they gave, along with a reporting of expenses.  The law requires candidates to file these reports.  Failure to file annual reports results in fines of up to $100 per day, maxing out at $10,000 per violation.  Ochoa failed to file five (5) reports, which means Ochoa could be fined up to $50,000.  Note also, Sec’y of State has the discretion to reduce fines.

By failing to timely file contribution and expense reports, Ochoa violates NRS 294A – AND because he’s a judge – Ochoa also violates a parallel provision at Code of Judicial Conduct, Canon No. 4, which requires that judicial candidates “shall report contributions received and campaign expenses,” [see Rule 4.2(A)(5)].

Sec’y of State fined Ochoa, which means he violated campaign laws, [NRS 294A], which automatically results in a violation of judicial canons, [Rule 4.2(A) (5)].  Ochoa violated both NRS and the judicial canons!

To bust-out, a judge for campaign violations, the Nevada Secretary of State requires written complaints.  Note: they DO NOT allow anonymous complaints!

Yes, TMP has a meritorious lawsuit against Sec’y of State for breach of confidentiality, but this is a small consolation for being outed to Ochoa!   Gee thanks, Barbara!

Barbara C. can scarcely process what should be a routine complaint!  Can we trust Barbara C. to manage a presidential election?  Asking for a friend.

Put $500 cash in an envelope, address it to yourself – and mail it to yourself.  Don’t have the guts to mail it?  Worried it may get lost?  Okay.  Maybe you should vote in person.

Remarkably, Sec’y of State defends Ochoa: “Judge Ochoa filed every year timely, he just filed the incorrect report.  Many candidates and judges make mistakes regarding their filings, or they have campaign managers who make mistakes. Judge Ochoa was informed of his mistake and fixed the issue and paid his penalty within an hour.” [Email to TMP; (Aug. 10, 2020); emphases added]

Sounds like David V. Thomas, the “campaign manager” (Austin Powers air quotes), dropped the ball big-time!  And Ochoa paid a whopping $70k—just for the primary!  But for what exactly? To get fined by the State?  Thomas can’t even get his client to file campaign reports on time?  Srsly?

HOW MUCH was the FINE?

TMP contacted Sec’y of State and asked for a copy of the fine issued to Ochoa.  But there is major pushback from Sec’y of State.  And this totally sketches!  Apparently, they don’t want TMP to have incriminating evidence; (c’mon!—they know why TMP wants it!).  So, TMP made a Public Records Request – demanding to see evidence of the Ochoa fine!

On Aug. 29, 2020, TMP made a Public Records request.  But here’s the kicker:  Nevada Sec’y of State refuses even to acknowledge the request!  It’s not so much that they’re withholding documents – they won’t even acknowledge a document request in the first place!  (Ya know?!)

Where state agencies, like the one Barbara C. runs, refuse to process public records requests, its prima facie evidence that fascism has come to the Great State of Nevada.

Perhaps Barbara C. refuses to produce evidence of the Ochoa fine … in order to leave TMP with no evidence for Judicial Commission … which would mean no ethics complaint against Ochoa.  Just a theory …

As per the Code of Fair Campaign Practices, all Nevada election campaigns are “open” and “public,” [see NRS 294A.290].  In other words, the general public has a right to see evidence of the Ochoa fine.

Tune in next time!—we’re taking wagers to see whether Barbara C. will capitulate – and produce evidence of the Ochoa fine (or not)!