You are here: Home / Endorsement Interviews / Father said; “toss me in jail so I can save my daughter, 13 years in family court is enough”! 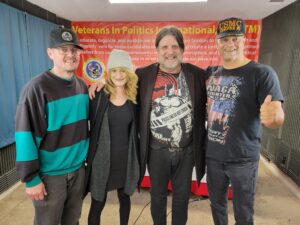 Plog has a 16-year-old daughter who he has been in out of family court for the past 13 years when his daughter was only 3 years old.

Plog said that his daughter tried to commit suicide because of the War his ex-wife has declared on him and the family court has allowed it.

Plog said that mom constantly is in contempt of court but Family Court Judge Charles Hoskin always turns a blind eye and a deaf ear.

Plog explained that the judge violated his constitutional rights by declaring him a “vexatious litigant” which violates his first and fourteenth amendments.

When a litigant is declared vexatious they cannot file documents or verbally defend themselves in a court of law. This type of corruption goes against our US Constitutions First and Fourteenth Amendments.

Fourteenth Amendment, which prohibits the states from depriving “any person of life, liberty, or property, without due process of law.”

Plog explained how Judges Bryce Duckworth and Charles Hoskin are close friends and do not change each other’s decisions if a litigant is removed from one courtroom to the other.

Plog explained that the next time he goes to court the judge is going to send him to jail for contempt.

The host explained that a family court judge is a civil judge and does not have the powers of a criminal judge.

Plog has the right to request a Public Defender to represent him in a contempt hearing.

One can argue that civil contempt is different from criminal contempt, but a jail cell cannot identify the difference.

Criminal contempt involves a specified sentence (jail and/or fine), while civil contempt sanctions can be more indefinite, lasting until either the underlying cause is resolved or the party in contempt complies with the court order.

Plog said toss me in Jail to stop the war between his ex to save his 16-year-old daughter from a second suicide attempt.

The host said that according to the Nevada Revised Statues custody cases should end within six months from the filing date. He continues to explain how cases continue for years to grow government, increase revenue, steal children and increase power in the judiciary. All done in the majority by the judge’s discretion. Many Family Court Judges don’t follow or are educated on Federal Laws, State Laws, and their Judicial Cannons.

Plog said his 16-year-old is counting down until she is legally aged out of the system.

Please click on the link below to view the video:

A JUDGE said there are no Due Process Rights in my courtroom!Constitutionalist Brenda Flank seeks to be a fresh face on the LV Council Ward 4!