You are here: Home / Home - Featured / Las Vegas Tribune just published “Judge caught with his hands in the cookie jar” 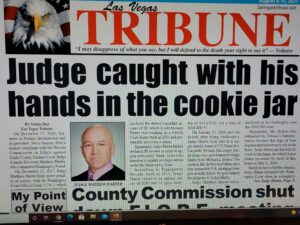 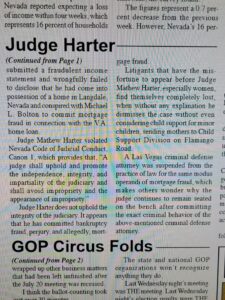 Judge caught with his hands in the cookie jar

On December 22, 2015, Judge Matthew Harter filed, under penalty of perjury, with the Bankruptcy Court Official Form 122A-1, which discloses the debtor’s monthly income of $0, which is odd because Harter was working as a Family Court Judge back in 2015 and presumably receiving a salary.

Apparently, Judge Harter falsely declared $0 income in order to appear sufficiently “broke” to have the standing to qualify as a legit debtor under the Bankruptcy Code.

Based on facts of public domain, Judge Harter defrauded the Bankruptcy Court when he wrongfully submitted a fraudulent income statement and wrongfully failed to disclose that he had come into possession of a home in Langdale, Nevada, and conspired with Michael L. Bolton to commit mortgage fraud in connection with the V.A. home loan.

Judge Mathew Harter violated the Nevada Code of Judicial Conduct, Canon 1, which provides that, “A judge shall uphold and promote the independence, integrity, and impartiality of the judiciary and shall avoid impropriety and the appearance of impropriety.”

Judge Harter does not uphold the integrity of the judiciary. It appears that he has committed bankruptcy fraud, perjury, and allegedly, mortgage fraud.

Litigants that have the misfortune to appear before Judge Mathew Harter, especially women, find themselves completely lost when without any explanation he dismisses the case without even considering the child support for minor children, sending mothers to Child Support Division on Flamingo Road.