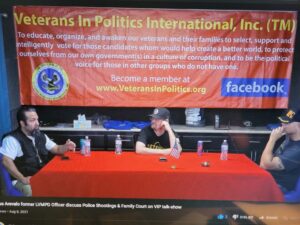 The Clark County District Attorney Steve Wolfson sent Arevalo to the Grand Jury, the first LVMPD Officer in the history of Metro to go before a Grand Jury for an Officer-involved shooting. Arevalo was on Paid Administrative Leave for almost 2 years at a tone of $180,000 from taxpayers.

Arevalo discussed how he was used by former Sheriff Doug Gillespie to take the fall for the incident. Arevalo stated that after he was terminated and received a lifetime disability for Posttraumatic Stress Disorder (PTSD) for the shooting of Gibson.

Arevalo also added that Sheriff Gillespie used the incident with Gibson to recover $42 million dollars from Desert Sky Communication to replace the radio system that was currently being used by Metro.  Metro stated that the faulty communication system aided in the death of Gibson.

The Veterans In Politics International (VIPI) was instrumental from the beginning of this shooting. Because of VIPI involvement and the involvement of other activist groups the (CIT) Critical Incident Training is mandatory in the academy where it was a volunteer program. The CIT is used to deescalate a potentially dangerous situation with verbal communication.

With the help of former Nevada State Senator Brower VIPI was able to have the word “Veteran” on Nevada driver’s license to inform law enforcement officers in the event of a traffic stop turn bad that a Veteran might be suffering from PTSD.

VIPI informed the Board of County Commissioners that Metro was renting the land at 400 South Martin Luther King Blvd, Las Vegas, NV 89106 at the time this was the brand new Metro Headquarters. The County was paying $1.4 million dollars per month in rent and VIPI suggested that if the County purchased the land they would save taxpayers millions of dollars in interest each year. The land is now owned by the County.

VIPI was able to convince the Nevada Legislators to send the “More Cops Bill” to the Clark County Board of County Commissioners. Along with many activist groups and the Board of County Commissioners, VIPI was able to delay the “More Cops Bill” and this ultimately forced Sheriff Doug Gillespie to resign after he publicly stated that he would be a candidate for a third term. You are Welcome Joe Lombardo because if it wasn’t for groups like VIPI, Lombardo wouldn’t have become Sheriff of Clark County. 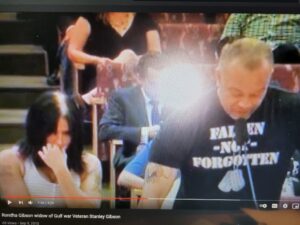 There were many extraordinary developments that came out of the shooting of Stanley Gibson, which has essentially saved the lives of many Las Vegas residents by significantly lowering police shootings in Clark County Nevada.

Arevalo continued by saying that he wished he could turn back time and he sincerely apologies for the pain he has caused.

It took VIPI close to 10 years to interview Arevalo about the Stanley Gibson shooting.

Arevalo explained that not only did he lose his job as an LVMPD officer he lost his marriage and now he is in a cesspool at the very spare of the Clark County family court system.

Arevalo believes that Hoskin should not be on the bench because of all the families he has destroyed during the Guardianship incident and Willick should have never been an attorney because of an incident that took place in a JC Penny dressing room in Carson City.

Watch the powerful interview by clicking on the link below:

Two Clark County Family Court Judges should be REMOVED from the bench NOT promoted!!