You are here: Home / Home - Featured / DEFUND the NEVADA COMMISSION on JUDICIAL DISCIPLINE! 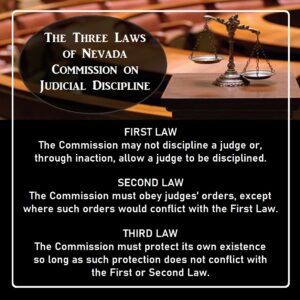 In the summer of 2020, it was discovered that Clark County Family Court Judge, Vincent Ochoa, much maligned for his malevolence and incompetence, failed to file five (5) years’ worth of campaign finance reports—a clear violation of NRS 294A—which meant that Ochoa was facing fines of up to $50,000, [NRS 294A.420]. 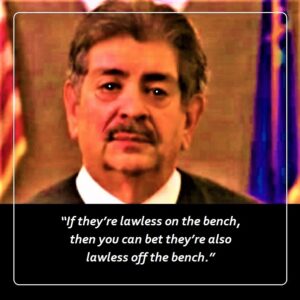 “If they’re lawless on the bench, then you can bet they’re also lawless off the bench,” says civil rights attorney, T. Matthew Phillips—the determined whistleblower who ratted out Ochoa to the Nevada Secretary of State.

By failing to timely file contribution and expense reports, Ochoa violates NRS 294A – for which the Nevada Secretary of State fined Ochoa.  But note, because he’s a judge – Ochoa also violates a parallel provision at Code of Judicial Conduct, Canon No. 4, which requires that judicial candidates “shall report contributions received and campaign expenses,” [see Rule 4.2(A)(5)].

The Nevada Commission on Judicial Discipline has a horrible reputation for NOT protecting the citizens of Nevada.  The Commission has a track record of acting ONLY on complaints from other judges.

Notably, Judge Linda Marie Bell used the Commission to lean on Judge William Potter and have him ousted from the bench—for what appears to have been a personal squabble between Bell and Potter.

Linda Marie Bell is upset about ball-gag antics, while, in the real world, legions of frustrated parents, who haven’t seen their children in ages, are upset about sociopath judges who daily flout the Constitution and kidnap children like its lunchtime.

The Commission’s favorite “go-to” excuse is that the complained-of judicial indiscretions, instead of being brought to the Commission’s attention, should instead be brought up on appeal.  (They love this excuse!)  But, the truth is, Ochoa’s indiscretions occurred off the bench, which means there’s nothing to appeal.  But again, this begs the question—which whimsical excuse will the Commission fabricate to save Ochoa?

Phillips makes an iron-clad case against Ochoa for violation of the Code of Judicial Conduct, Rule 4.2(A) (5).  Yeah, sure, but will the corrupt and inept Judicial Commission actually do anything about it?

One thing’s for sure; Phillips’ meritorious complaint against Ochoa will surely plumb the depths of corruption and ineptitude at the Commission—which goes out of its way to protect lawless judges.

We totally anticipate business as usual at the Commission.  We wholly expect Nevada Commission on Judicial Discipline will invent some phony-baloney reason to protect Ochoa.  With 100% certainty, the Commission will reject Phillips’ complaint against Ochoa.

And when they do reject Phillips’ complaint, (which they will), Phillips vows to sue the Commission and attorney, Paul C. Dehlye in federal court.  Why?—because Ochoa clearly violated the Code of Judicial Conduct.  It’s not a close call.   If the Commission fails to violate Ochoa, it can only be through willful failure to follow the law.

“We must defund the Commission,” stated Phillips, “because they’re useless.”

Attached is a copy of the complaint Phillips filed with the Nevada Commission on Judicial Discipline.  Read the complaint against Ochoa.  Download it here!file:///C:/Users/Owner/Downloads/Judicial-Commission-Complaint-Ochoa-Aug.-2-2021(1).pdf