You are here: Home / Endorsement Interviews / “A Clark County Judge Found THIS Under His Sofa (CLICK HERE!)” 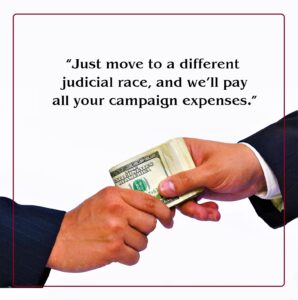 A humorous American proverb holds that—if it weren’t for (R) and (D) designations on the ballots—voters wouldn’t know how to vote!  Predictably, year after year, American voters cast their votes based only on party affiliation—(R) or (D).

State law provides that Nevada judges and judicial candidates “shall not publicly identify as a candidate of a political organization,” [Nevada Code of Judicial Conduct, Rule 4.1(A) (6)].   A judge’s political branding is forbidden because it shows “bias.”

As it turns out, the absence of (R) and (D) on the ballots confuses voters.  With no (R) and (D) cues to guide them, voters don’t know which candidates to vote for.

In “non-political” elections, where no (R) and (D) choices appear on the ballots—how do voters know who to vote for?  Well, with no (R) and (D) on the ballots, voters invariably turn to gender, race, and ethnicity—to determine “who” best represents their interests.  After all, it’s only human to identify with one’s own “tribe,” which is defined chiefly by gender, race, and ethnicity.

Generally speaking, in “non-partisan” election races, the candidate’s gender, race, and ethnicity are the only remarkable attributes that candidates have to offer—because again—there are no (R) and (D) designations on the ballots.

Almost universally—with no (R) and (D) choices on the ballots—a candidate’s race, gender and ethnicity are the sole influences that affect voters.  A candidate’s first name typically reveals his or her sex, while the last name may suggest race or ethnicity.

The Voting Booth—Hotbed of Bigotry

In a judicial race with no (R) or (D) on the ballots—an attorney called Leticia “Letty” Gonzales—based only on her name—has a decided advantage running against an incumbent judge called William “Bill” MacGregor.

Where judges run in elections, there is no such thing as “strategy.”  A candidates’ odds of winning are based only on their names—from which voters determine the candidate’s sex, race, and ethnicity—and thus how to cast their vote.

Again, judges may not affiliate with “politics,” and so, it begs the question: why do Clark County judges hire “political” consultants?—to remind candidates to not chew gum during TV interviews?—to write rousing stump speeches?—to compose catchy campaign jingles?  Truth is, when it comes to “non-political” races, “political” consultants are entirely unnecessary.

So, why do candidates hire “political” consultants in “non-political” races?  Hmm?  Obviously, they’re not giving “political” advice—so what on earth are these consultants doing to earn their exorbitant consulting fees?

Those who tout themselves as “political consultants” are, in fact, “fixers”—who work with incumbent judges—to “fix” the odds—i.e., to procure “friendly” campaign rivals—to ensure the incumbent coasts to smooth reelection.

The shocking truth is that Clark County judges routinely conspire with retired attorneys—who pretend to be political “consultants,” but in reality, work behind the scenes—to procure ambitious young attorneys—to be “friendly” campaign rivals who gently compete with incumbent judges.  Clark County voters believe, (and why wouldn’t they?), that all candidates are actually trying to “win”—but they’re not!  In reality, some are trying to “lose!”

Where judges rig election, it creates bleak appearances of glaring improprieties, [NCJC, Canon No. 1]; further, it shows conduct “inconsistent with the integrity of the judiciary,” [NCJC, Canon No. 4].  In Clark County, this disquieting practice of judges systematically rigging elections is dizzying!—and all too commonplace.  But it’s as old as the Crucifixion.  And they really don’t even try to hide it…

Pres. Trump and Gov. Sisolak now debate mail-in voting vs. traditional voting.  Both sides—(R) and (D) — are furious!  Each side contends their votes won’t count!  But if voters knew the truth—about rigged judicial races in Clark County—they’d howl with fury!—because where judges rig elections—nobody’s vote counts!

A Change is Gonna Come

Where (R) and (D) parties compete in elections, we expect corruption—but not in judicial races!—not with officers of the court!  Now is the time to effectuate change.  It’s been a long, long time coming.  But I know a change gonna’ come—oh yes it will!  Just wait and see! 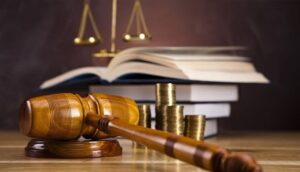 The Veterans In Politics International will conduct its Judicial Round Table for “recommendations” on Wednesday, September 16th at 6 pm “Live-stream Facebook page: Judicial Court Watchdog group Veterans In Politics Foundation click onto the link: https://www.facebook.com/WARdeclaredonClarkCountyNevadaFamilyCourtSystem  for the following judicial seats:

A CORRUPT JUDGE IS A GREAT VERMIN!!Defender of Human Rights & Protector of the Constitution runs for the Supreme Court!