You are here: Home / Endorsement Interviews / The Curious Case of Carli Lynn Kierny

DATELINE—Las Vegas, Nev., (Oct 12, 2020):  Carli Lynn Kierny is a candidate for Clark County Judge Dept. 2; she is running against Judge Richard Scotti.  She now works with the public defender’s office. 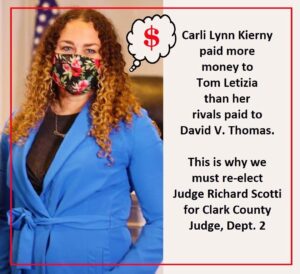 She has been an attorney for only ten (10) years; and, at just 38 years of age, some folks are wondering whether she has sufficient life experience to be a District Court Judge.  Ms. Kierny is a charming lady and a well-spoken lawyer.  For the past ten years, she has been practicing in Clark County; two years prior, Ms. Kierny practiced in Illinois.

However, Veterans In Politics wants to know—

If elected judge, will Ms. Kierny actually protect our children?  Notably, Ms. Kierny did NOT get the endorsement of any law enforcement agency—and this fact speaks volumes.

To her credit, Ms. Kierny has done a grand total of 41 jury trials, which means Ms. Kierny likely possesses a keen understanding of the rules of evidence.

According to Nevada Secretary of State, Ms. Kierny paid $15k to Tom Letizia?  But, for what exactly?  What does $15k buy-in a primary election?  Two box seats behind home plate at Dodger stadium?

The Dept. 2 contest was a four-way horse race!  Let’s break it down.  On Day One, it was a two-way horse race featuring Ms. Carli Lynn Kierny versus Mr. Dustin Marcello.  Obviously, both of these candidates were “in it” to “win it!”  Why? —because these candidates entered the race on Day One! —so you know they’re serious about winning.

But who is Dustin Marcello?  During the primary, Marcello loaned $27k to his own campaign!  But then he paid only $9,000 to the world-famous David V. Thomas aka the “Judge Maker”, now that nickname by itself is a joke—the ex-lawyer who admits that he calls candidates on the telephone and urges them to not run against rival candidates who pay him large sums of money. Money talks bull-shit walks!

HOW DO RUMORS GET STARTED?

Rumor ‘round the campfire is that David V. Thomas calls judges on the telephone—and tries to dissuade them from running for reelection.  And this rumor carries an audible ring of truth!  The way we see it, facts can be so misleading!  But rumors, true or false, are often revealing!

We believe this kind of conduct by David V. Thomas—phoning candidates and urging them NOT to run against other candidates who pay him money—is grounds for a criminal investigation.  No person should ever contact a candidate, especially a sitting judge, and attempt to dissuade them from running for office.  How would he take it, if someone called his wife Judge Nancy Allf, and requested she bow out from her judicial district court seat?

Vegas odds-makers set the odds heavily in favor of Kierny over Marcello.  Why? —because Kierny paid $15k to Letizia, while Marcello paid only $9,000 to Thomas.  The fact is, Marcello never stood a chance.  Why? —because he didn’t pay enough dough to David V. Thomas.  Marcello was about $30,000 short.

The reader may recall the 2017 municipal election where Cara Campbell (a Letizia marker), ran against Heidi Almase (a David V. Thomas marker).  As it turned out, Campbell gave a whole pile of money to Letizia, and Thomas apparently couldn’t handle the fact that Almase paid less.

Most remarkably, Cara Campbell spent over $151,000 on Letizia!  When Thomas learned how much Campbell had paid Letizia, Thomas demanded that Almase immediately pay $30,000 or else.  Almase didn’t pay-up, so Thomas dropped Almase like a hot rock!  So much for client loyalty!  LoL!  And, despite the fact that Almase had a contract with Thomas to pay $2,000/mo., Almase never sued Thomas for breach of contract. It’s not too late Heidi!

The 2020 Dept. 2 race would have been more accurately billed as Letizia vs. Thomas.  As it turned out, Letizia bled his client dry harder than Thomas did, and Letizia naturally won the bout—by TKO!

Next thing you know, Barbara Schifalacqua enters the race—at 3:1 odds.  But this is curious; why enter a 3-way race?  Why didn’t Schifalacqua instead enter another race against one opponent—at even odds?

Barbara must be a Democrat!  Uh-oh!  So, why did Barbara pay $44k to the Democratic Party?  One has to wonder how much of Barbara’s $25k loan came from Democratic Party supporters!  But wait just a minute—this is supposed to be a non-partisan race, right?

And then, the incumbent, Judge Richard Frank Scotti enters the race—to reclaim his seat on the bench.

RESULTS of the PRIMARY

After the primary election, on June 9, 2020, the two front runners turned out to be Carli Lynn Kierny and Judge Richard Frank Scotti—who will be the featured contestants on the November ballots!