The following accounts were sent to us by staff at the North Las Vegas V.A. Medical Center. 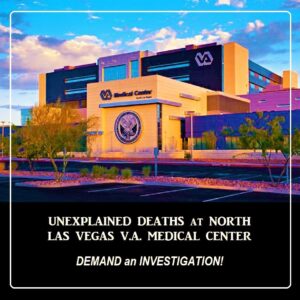 On August 21, 2020, a 75-year-old Black female arrived at the Emergency Room of the North Las Vegas V.A. hospital.  She accompanied her husband—a Marine Corps veteran—to the V.A. hospital.  Her husband was scheduled to receive a blood transfusion.

The veteran couple had driven for over 90 minutes to get to the V.A.  Upon arrival at the E.R. entrance, the wife was denied entry by the Emergency Room staff, citing COVID 19 policy.

At the insistence of the staff, the wife left the ER.  She returned to the car in the ER parking lot.  She sat in the car waiting for her husband’s procedure to end.  Notably, the ER parking lot has no shade covering to protect cars from direct sunlight.

It was a hot August day.  The temperature in Las Vegas was 114 degrees.  In the parking lot, the temperature was likely around 125 degrees.

Waiting in the car alone, the wife must have felt the heat.  She apparently became thirsty.  She went back to the ER Dept. staff two more times.  She told the staff that she was thirsty and needed to use the bathroom; however, on both occasions, staff turned her away.

This poor woman wanted to cool-off, but she had no driver’s license, so she couldn’t drive home.  And, with only a quarter tank of gas, she did not wish to keep the engine running with the A/C.

She again sought refuge in the ER Department, but once again, they turned her away.

About five (5) hours later, the woman was found hunched over in the car. She died of a heat-related injury.  She had suffered extreme heat stroke.  Her body core temperature reached approx. 120 degrees; when they discovered her, she had heat blisters on her skin.

This death is tragic and unacceptable.  But still, the V.A. Director has made no policy change for elderly caregivers who wait for their V.A. patients and loved ones.

Is there no “waiting room” for caregivers and family members?  So long as they wear a mask ‘n gloves, they should be allowed into the hospital, right?  Well, apparently, not.

The V.A. insists that—regardless of whether that 75-year old woman wearing a mask and gloves—no caregivers or family members may come into the hospital for any reason!

Again, even if the caregivers or family members have to mask ‘n gloves—or even a Haz-Mat suit—the V.A. will forbid entry.  According to a statement issued by the V.A., caregivers will “be required to wait for their patient in their car.”  (This is ridiculous!)

I am a paraplegic patient who uses a manual wheelchair. I rely on the Las Vegas public Paratransit bus system.  On September 17, 2020, it was 104 degrees.  I had a scheduled pickup time of 7:30 p.m.  I had just finished my appointment.  While waiting for my bus to arrive, I sat in my wheelchair—inside the main entrance of the V.A. hospital—where they have air conditioning.  However, they asked me to wait outside.

I was wearing a mask and I did social distancing.  So, I asked them why they required patients to wait outside for their pickup.  But still, they told me I must leave the facility.  This is an outrage!

I suffer from a disease that is made worse when the body’s core temperature rises.  For me, if exposed to heat for prolonged periods, it can be fatal.

So why did the V.A. make this vet wait outside in the heat?  The pathological fear of Covid-19 yields policies that are ultimately determinant to our men and women who serve.

At the same V.A. hospital, a veteran signed into the Dialysis Clinic for his scheduled treatment.  Notably, dialysis patients are treated on an “inpatient” status.  After finishing his treatment, he notified the staff that he had to use the restroom.  He was experiencing chest and lower back pain.  Staff assisted him in the bathroom.

This patient was later found deceased in the bathroom—a full eight (8) hours after finishing his treatment and being escorted to the restroom by staff.

No staff member or clinician bothered to follow-up on this patient until the clinic had closed.  Did staff know that the deceased veteran had signed-out after his treatment?  Did the clinician who escorted the veteran to the restroom ever check-up on the patient after he was escorted to the restroom?

One thing’s for sure—this patient had complained of chest and back pain to staff.  He was escorted to the restroom, but no-one checked on him for at least 8 hours.

This incident, with the dialysis patient, according to Medical Center Director, William J. Caron, was “investigated and reported in accordance with established protocol.”

Remarkably, the V.A. officially declares that the recent deaths at the North Las Vegas V.A. hospital were already “reported” and “investigated,” however, the results of the official investigations are being kept top secret!

It seems unlikely that the V.A. could have done legit investigations on these deaths.  Why?—because V.A. staff would have had to complete staff interviews, review medical records, review radiology reports, and receive the coroner’s report—in less than 18 days—start to finish.  And that’s just impossible to do in only 18 days!

The V.A. Medical Center has no coroner.  Bodies are remanded to the Clark County Coroner’s Office, who indicates that, during these troubled times, an autopsy may take 6 – 8 weeks to prepare.

Several competent sources—who were directly associated with the two deaths—state that vital facts were not included in the investigation.  There are inconsistencies in the incident timelines and the people involved.

What actions, if any, did the Courtesy Car take to revive the wife?

How did they determine the wife’s core body temperature?  Did this occur in the car?  Or at the V.A. facility?

Was the wife conscious or unconscious when the Medical Center’s Emergency Response Medical Team arrived?  With a body core temperature of 120 degrees, did the wife have a pulse at the time of the medical team arrived?  Do Courtesy Car drivers have First Responder, CPR, or First Aid training?

Sources have stated that, at the time of this incident, the Courtesy Cars were not required to carry water on them for patients or individual caregivers who were thirsty.

The official V.A. report appears to identify that the patient suffered a stroke in the ER when the ER team was attempting to revive her. According to the official report, the patient’s body core temperature was 120 degrees.  However, when the body temperature rises above 104 to 105 degrees, it is deemed a medical emergency.

With a core temperature between 105 and 108 degrees, Hyperpyrexia causes the body to begin to have changes in protein molecule configurations, which resultants in permanent impairment or loss of biochemical functions.  Patients experience a high degree of confusion or delirium, seizures or convulsions, double or blurred vision, vomiting, severe diarrhea, loss of bladder control, etc.  Immediate medical treatment is required for those with core temperatures between 105 and 108.

With a core temperature above 108 degrees, Hyperpyrexia causes the body to have permanent changes in protein molecule configurations.  Patients can go into a coma.  Permanent brain damage and death can result if not treated immediately.

With a core temperature above 110 degrees, a person’s physiology becomes permanently altered and impaired. There have been no documented patients surviving with a body core temperature of over 115 degrees.

These grave injustices are simply unacceptable.  We cannot allow our veterans or their loved ones to suffer under such deplorable conditions.  We demand fair V.A. medical centers!

WE DEMAND a PROPER INVESTIGATION

Other complaints related to the VA Nevada 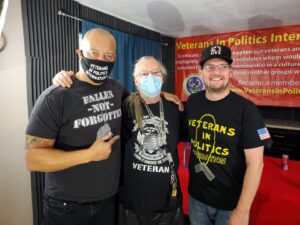 SETTING THE RECORD STRAIGHTMARY PERRY vs. SARA DAYANI – TOO HOT in the KITCHEN!