You are here: Home / Endorsement Interviews / MARY PERRY vs. SARA DAYANI – TOO HOT in the KITCHEN!

Mary Perry is the Republican Candidate for Clark County Family Court Judge, Dept. “P.”  This election contest features Mary Perry, a family court attorney versus Sara Dayani, a highly respected family court attorney.  Having advanced from the primary, Perry and Dayani will square off in the cage on the first Tuesday in November. 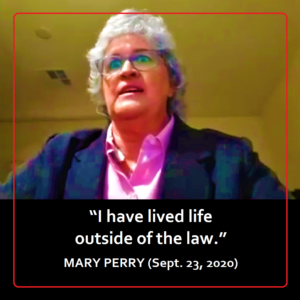 The Dept. “P” primary was a three-way race.  Fred C. Page was the third candidate in the running for family court judge.  Reliable sources indicate that Fred C. Page was in fact Mary Perry’s “running mate.”  (Get it?)

Rumor around the campfire is that Fred C. Page entered the race “as a favor” to Mary Perry—ostensibly to dilute the voter appeal of Sara Dayani.  Long story short, Fred C. Page was NOT “in it” to “win it.”  He was deliberately trying to lose to skew electoral results—to benefit his running mate, Mary Perry.

Notably, Mary Perry’s running mate had zero campaign contributions and zero campaign expenses and this, of course, tends to suggest that her running mate did not “vigorously contest” nor “fairly conduct” the election contest—as NRS 294A.290 affirmatively requires.

Sure, the rigging of election contests may be commonplace in (R) and (D) races, but then again, candidate collusion is to be expected in political contests.  However, in judicial contests, which are non-political, candidate collusion is unacceptable!  Why? —because judicial contestants are supposed to be acting in the highest aspirational capacities—as “officers of the court.”

The last thing we need in Family Court is another megalomaniacal judge—like Mary Perry—to ascend the bench via underhanded means.

Guess what?—if you voted in the Dept. “P” primary, your vote didn’t count.  Why? —because, thanks to Mary Perry, not all contestants were actually trying to win.  At least one was trying to lose on purpose—not unlike the Chicago White Sox in the 1919 World Series.

But one thing’s for sure; if God forbid, Mary Perry gets elected, she will provide special dispensation to Fred C. Page—and the last thing we need is more Family Court cronyism.

QUESTION:  If Mary Perry were to become judge, would Fred C. Page be on her recusal list?

Make no mistake; Fred C. Page entered the race for one reason—i.e., to take votes from Mary Perry’s opponent; standing alone, this is a sufficiently compelling reason to not vote for Mary Perry.

Mary Denise Perry is twice divorced.  She once held bar licenses in Missouri and Hawaii.  She is generally regarded as a mediocre attorney with a gruff personality.

Mary Perry has personal knowledge that vaccines cause indiscriminate, debilitating injury; but still, she can’t quite bring herself to oppose vaccines.  She’s a hypocrite.  Fearing she will be labeled a conspiracy theorist—for her subversive counter-culture anti-vaccine stance—Mary Perry pretends to be a pro-vaxxer, despite her personal knowledge that vaccines are poison.

MARY PERRY—in HER OWN WORDS:

“The yellow fever vaccine all but killed me and destroyed my health.  I was forced to do the flu vaccine every year after that while on active duty.  Every year within one week of said vaccine, I was hospitalized with the flu.  This stopped when I got out of the Air Force and stopped taking vaccines.  I tried one last time around 1997 and once again landed in the hospital.  No vaccines for me.”

Most curiously, Mary Perry doesn’t believe that men commit domestic violence.  She believes that women are prone to cry wolf.

Most shocking, Mary Perry contends that, when it comes to domestic violence, all women are liars.  The mindset of this individual should not be on any judiciary bench, let alone family court, and should be banned from ever seeking an appointment to the judiciary.

Mary Perry used to work for the corrupt family court attorney, Marshal Willick.  And the question remains– if Perry were to be elected will she recuse herself from all cases involving Willick Law Group and the Abrams and Mayo Law Firm?  Indeed!  Mary Perry’s close and substantial relationship with Marshal Willick and Jenny Abrams is enough reason to NOT vote for Mary Perry.

Most troubling, Mary Perry is an active participant with the Facebook group, Nevada Court Watchers, a shill group that heckles family court litigants who lose their children.  Nevada Court Watchers has but one purpose, i.e., make fun of parents who speak-out against ongoing corruption in Family Court.

Basically, Mary Perry openly and notoriously supports a P.A.C. whose only purpose is to traumatize parents who have lost children.  Mary Perry is a family court disaster waiting to happen.

On June 11th the Veterans In Politics published “A PUBLIC NOTICE TO CEASE AND DESIST” (see article https://veteransinpolitics.org/2020/06/a-public-notice-to-cease-and-desist/?fbclid=IwAR0yL9WyeXc-oA0HKhvmm6OQTqWPHYl-lnx7_Xh5X90cQuKzK9q3aN3BTzI) you have a logo on your website Mary claiming an endorsement. Again we own the name and logo, it’s easy to figure out by doing your due diligence go to the Nevada Secretary of State website. So please remove the logo from your site immediately, it is TRADEMARKED.

For the love of God, please DO NOT vote for Mary Perry.

Happily, there is a worthwhile candidate on the Dept. “P” ballot—and that candidate Sara Dayani, a well-respected family court attorney.