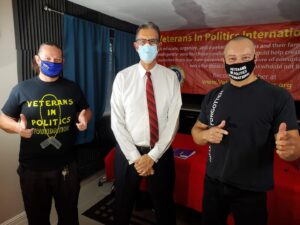 The Veterans In Politics video internet talk-show interviewed Judge Michael Villani Clark County District Court Judge Department 17, Villani explains that the judicial temperament of a district court judge made him realize that he needs to be a judge that does the opposite on the bench.

Judge Villani is one of four homicide judges with over 200 cases, he has the oldest case from 1990. Judge Villani explains that he has never legislated from the bench and has the lowest reversal rate on the district court bench.

Judge Michael Villani is an excellent judge on the bench, a judge like this would not have any issues surviving the voters with Veterans In Politics International proposed assembly bill “Remove or Retain”!

The interviewer Frank Friends explained that Nevada has a brand new execution chamber that cost taxpayers over $865,000 and the last time Nevada executed anyone was in 1979.  Does this sound like a wise investment of Nevada’s money?

Please click on the link below to watch the interview:

‘GONE BUT NOT FORGOTTEN!’ – The Judge Stefany Miley (aka Stefany Tewell) Story!Discrimination within the LVMPD-A culture of corruption!