“This is not promoting confidence in our Judiciary” 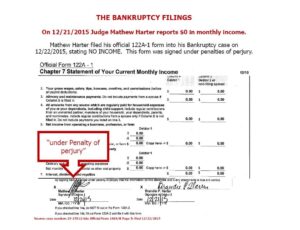 Veterans In Politics International (VIPI) investigates; on December 22, 2019, we reported, Judge Committed Bankruptcy Fraud (see article: https://veteransinpolitics.org/2019/12/judge-committed-fraud-on-bankruptcy-filings/.  Do you want to know what was done about it? Squat, nada, nothing! Surprised?

Where are our protector, the infamous, do nothing, the Nevada Judicial Disciplinary Commission? We know they chase down judges that have a potty mouth to their judicial staff. They are sincerely concerned and worried about what a judge is wearing under their robe. They are also demanding to know why a judge would leave a post note to another judge saying; wait for it, “Thinking of you Billy”.

Matthew Harter Clark County District Court Judge Family Division committed perjury and fraud and all we hear are crickets. The judge is a criminal, plain and simple! This is an embarrassment to the judiciary for not finding out about this and removing this criminal judge off the bench. Harter cannot be trusted to judge a bar-b-q burger competition. Let alone people’s lives!

In this year’s election, members of the Nevada State Bar, you allowed this criminal to run unopposed. Shame on you! “Mickey Mouse”, “The Joker”, or “The Riddler” could have beat this judge just by placing their name’s on the ballot but you cowards allowed Harter to get another six-year ride on the shoulders of taxpayers.

Members of the Nevada State Bar, you have a judiciary responsibility to report all crimes by any member of the bar once you have knowledge of the violation. Now, tag you are it!

You give us no choice we will file dozens of complaints and will not stop until this judge is disrobed!

This is why we need the “Remove or Retain” Assembly Bill to become a reality. What lawmaker has the heart and confidence of Nevada voters to ensure that this type of system becomes yesterday’s problems in an effort to minimize corruption on the bench? (see the article “A right not excised is a right lost” https://veteransinpolitics.org/2020/11/a-right-that-is-not-exercised-is-a-right-loss/).

Below is the complaint filed by Veterans In Politics International President:

(6) HARTER Discloses $-0- Income: Remarkably, JUDGE MATHEW HARTER’S “122A-1” form discloses a monthly income of $ -0-, [see Exhibit No. 1], which is odd because HARTER was working as a family court judge back in 2015, (and presumably receiving a salary). Complainant believes that HARTER falsely declared $-0- income in order to appear sufficiently “broke”—to have the standing to qualify as a legit debtor under the BK Code.

(7) HARTER Commits Perjury: Complainant believes that when HARTER reported to the bankruptcy court a monthly income of $-0-, HARTER committed straight-up perjury. Complainant further believes that the State of Nevada can easily corroborate that HARTER did, in fact, receive a salary in 2015.

(9) Undisclosed Single-Family Home: Just one month after filing bankruptcy, JUDGE MATHEW HARTER, on Jan. 23, 2016, took title to a single-family home in Logandale, Nev., [see Exhibit No. 3]. This single-family home was quitclaimed—to Judge HARTER—from one, “Michael L. Bolton.” Notably, the grantor, “Michael L. Bolton” had taken out a non-assumable V.A. mortgage loan—just months before he quitclaimed the property to the grantee, Judge HARTER. Remarkably, Judge HARTER never disclosed this $300,000 asset in his bankruptcy case.

NEVADA CODE OF JUDICIAL CONDUCT— (13) Judicial Canon No. 1: JUDGE MATHEW HARTER violates Nevada Code of Judicial Conduct, Canon No. 1, which provides that— “A judge shall uphold and promote the independence, integrity, and impartiality of the judiciary and shall avoid impropriety and the appearance of impropriety.” [NCJC, Canon No. 1; emphases added].

(14) Integrity of the Judiciary: Judge HARTER does not “uphold the integrity of the judiciary.” It appears he has committed bankruptcy fraud, perjury, and presumably, mortgage fraud. This violates the People’s right to a fair judiciary.

(16) Public Policy: Where judges file bankruptcy, the very act of declaring bankruptcy creates an appearance of impropriety. Judges earn more than three times the average citizen. Judges are supposed to be prudent and cautious. Unless there are catastrophic medical bills, judges should not be filing bankruptcy in the first place. It just looks bad. Notably, court records reveal that Judge HARTER’S bankruptcy was business-related, i.e., unrelated to catastrophic medical bills.

(17) The Specter of Judicial Bribery: It goes without saying; where judges are underwater in their personal finances, and such facts are available to the general public, it makes desperate judges more amenable to judicial bribery.

(18) Rule 1.1—Compliance with the Law: “A judge shall comply with the law, including the Code of Judicial Conduct,” [NCJC Rule 1.1]. However, JUDGE MATHEW HARTER fails to comply with the law. Judge HARTER, it appears, has committed bankruptcy fraud, perjury, and presumably, mortgage fraud, which violates the People’s right to a fair judiciary.

(21) Factual Summary: JUDGE MATHEW HARTER, it would appear, has committed bankruptcy fraud. And this is totally unacceptable! It violates every moral precept of what it means to be a judge. No right-minded citizen, upon learning the facts, would believe that HARTER deserves the title, “Your Honor.”

(23) Final Thought: Judge HARTER, it appears, committed bankruptcy fraud, and the proof layout in the open—in the public domain. Judge HARTER boldly acted in “plain view” of the general public, right under the nose of a federal judge! One shudders to imagine the corruption that goes on in the private universe of HARTER’S courtroom, where sealed family court cases lay beyond public scrutiny, and the lives of countless parents and children are ruined on a daily basis.

a  AFFIDAVIT of STEVE SANSON c  My name is STEVE SANSON. I am the President of Veterans In Politics International. All the within allegations are true and correct of my own personal knowledge. If called upon to testify, I could and would give competent and truthful evidence.

3. Exhibit No. 3 is a true and correct copy of a deed to the single-family home in Logandale, Nevada that HARTER recorded on May 6, 2016. HARTER took title to this home during the bankruptcy, but he never reported it to the bankruptcy court. I hereby declare under penalty of perjury under the laws of the State of Nevada the foregoing is both true and correct.

Covid-19 is it a weapon of war?Steve Sanson President of Veterans In Politics International helping to make Nevada a better place!