The election year 2022 is right around the corner. On the ballot will be the Clark County Assessor.

Johnson a Las Vegas Native graduated from UNLV with a bachelor’s degree in Business Administration. Johnson has been in the Assessor’s Office for over 26 years and excelled through the ranks.

Johnson has a hands-on working knowledge of the entire Assessor’s Office.

Office of the Clark County Assessor:

About the Clark County Assessor:

Briana Johnson was elected Clark County Assessor on November 6, 2018.  Prior to being elected, she proudly served the public for over 26 years in the Assessor’s Office.  She started in 1995 and held various positions in the Appraisal Division, including Manager of Property Appraisal, prior to being promoted to Assistant Director of Assessment Services in 2016.

As Assessor, Briana Johnson oversees the daily operations of the Office and the assessment of approximately 775,000 parcels, 25,000 manufactured homes, and 45,000 businesses in Clark County.  In addition, she supervises the processing of approximately 80,000 exemptions for the Blind, Veterans, and Surviving Spouses.

Johnson is a native of Las Vegas who graduated from Valley High School.  Johnson later graduated from the University of Nevada Las Vegas and received her Bachelor of Science Degree in Business Administration.  Briana Johnson holds a Property Tax Appraiser Certificate in both real and personal property from the State of Nevada.

Johnson’s professional affiliations include the International Association of Assessing Officers and the Nevada Assessors Association.  Johnson is also a member of Toastmasters International.

Please click on the links below to be informed:

Citizens Review Board is a Board of “CLOWNS” 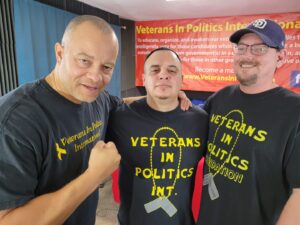 Amado has been championing legislative reform because of the tremendous corruption that has plagued the family court system. Amado was motivated by the corruption at the hands of Mathew Harter Clark County Family Court Judge.

Amado would like to eliminate qualified immunity, Amado discussed his victory from the Nevada Supreme Court when he received an order for Reversal and Remand on June 29, 2020, against Harter.

In addition, Amado also received a Disqualification from the Nevada Supreme Court because of bias reasons again, against Judge Harter in November 2020.

Amado said that Judge Harter has destroyed his daughter’s life and the lives of his family that he can never get back.

Amado went before the Las Vegas City Council requesting that we form a Public Citizens Review Board to oust corrupt elected officials.

Amado state that the LVMPD Citizens Review Board is a “Circus” that is there to protect corrupt police officers and not the citizens they have violated. 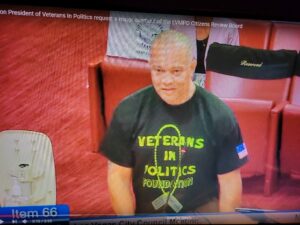 Many years ago I was appointed to the citizen’s review board but after my 1st hearing (which resulted in metro revising their policy based on my recommendation) I kept from hearing further cases for applying common sense and my refusal to wear a shirt and tie….. the ides of a board is great, the lady that runs it needs to go and people with some background or at least common sense need to serve on board…. when I am stopped I always disclose I have a CCW and where my weapon is (right front pocket) because I know the officer may not have run scope on me when he pulled me over and as you say to get a CCW I had to pass an extensive background search and I am told no one with a CCW permit has ever committed a crime with their weapon…. that cop needed a reprimand at the least.