There is nothing “HAPPY” about Memorial Day 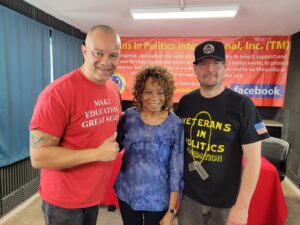 The election year 2022 is right around the corner. On the ballot will be the Clark County Recorder.

Conway has served four terms as the Clark County Recorder, Conway has streamlined the department for the betterment to Clark County residents each and every time and she will continue to do the same in her fifth term as her department brings in 1-2 million dollars per day to the county’s bank account.

About the Clark County Recorder:

Debbie Conway has served the public for over 20 years and is currently the Clark County Recorder. Conway began her first term in January 2007 and was re-elected in 2011, 2015, and 2019. Conway oversees approximately 60 employees and operates on a combined budget of approximately $10 million.

Since taking office, Conway’s focus has been on technological enhancements and services to customers; implementing electronic recording, and installing an advanced recordation software system.

The Clark County Recorder’s office records one million documents annually and collects $175 million in Real Property Transfer Taxes and general recording fees. Prior to Conway’s career in government, she spent 20 years in the private sector in the areas of bank management, sales and project management, grants management and administration, and as a teacher and trainer.

Conway produced and hosted KCEP’s radio talk show, “Economic Empowerment Into the 21st Century;” and was an adjunct instructor for the College of Southern Nevada School of Business.

Conway is also a graduate of the Leadership Las Vegas Class of 2000. Conway was a finalist for the Women of Distinction Award in the category of Philanthropy, Community, and Government Services. The Recorder and Assessor formed a collaborative partnership and they are recipients of two national awards (NACO and NACRC) for best practices in implementing the Q-Matic queue management system.