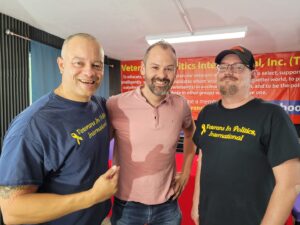 Law is a real down-to-earth type of guy. When asked for his bio Law placed his children first, Law is very passionate about his children. It was refreshing and amazing to hear. Law added that he is a man of God.

Law says that the party lost its institutional memory as to why it exists. Law added that the purpose of the party is to elevate Republicans by winning elections to better serve our community.

Law says we need to reprioritize as a people and continues by saying we need to involve everyone. We need to be the ball. What’s been missing is vision and leadership, which bad behavior comes around because there is no vision nor leadership. We currently exist for the sake of meetings, the new sport is to defeat each other.

We need vision and leadership.

A question was brought up about the finances of the Republican Party. Law added that there are currently two Federal Elections Commissions (FEC) violations that have gone unanswered regarding the Clark County Republican Party.

Law added expenditures and donations are missing off of the expenditure reports that have been filed with the Nevada Secretary of State. Law stated a forensic audit is a most.

Law comes with an extensive background in politics from the county to federal levels.

Law discussed a press conference that the current party leadership called and stated that our own party members are racist with no evidence. In addition, blocked 430 people from joining the Clark County Republican Party, because they wanted to control the vote of the current election and then added 60 people whom they vetted to support an election their way.

Law added the current party leadership alienates republicans and isolates them from the party because they don’t agree with their views.

We need to start strengthening ideas that we all can agree with by focusing on “America First” policies than inter-party rivalries.

There are four candidates attempting to climb the ladder to Chairmanship. Former US President Donald Trump has endorsed Jesse Law and his candidate slate.

Law said he is in this race for party leadership because of the injustice that has currently plagued the party.

Law added that the county party is not the answer to everything, but he would like to be in party leadership to help direct the party to unite people in making our community a better place to live and raise our families.

Law is in this to change the behavior of the party and become a unifier.

We need more LAW and order within the Clark County Republican Party.

Please click on the video below and listen to this awesome interview to focus on a party of unity: