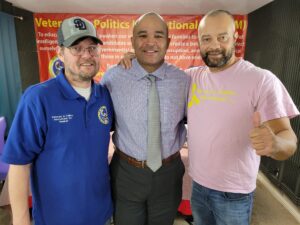 Spencer has a very unique background. Spencer moved to Vegas from Detroit at 3 years old.

Spencer continued by saying that he lived in Canada for a portion of his life, while his father was on the run from the police.

Spencer said he grew up around a lot of criminal activity.

Spencer said his father did 7 years in prison for murder.

Spencer said he lived in multiple weekly hotels growing up in Las Vegas.

Spencer said that his mother separated from his father at the early age of 5 years old and his mother raised him as a single parent, he watched her struggle.

The host asked what motivated him to be a police officer, Spencer said his father’s respect for the police force.

Spencer said his father was mixed up with drugs and died when he was 12 years old.

Spencer first started his career in policing when he was a Sparks Police officer, he now is in his 24th year as a law enforcement officer.

Spencer was also in charge of the internet task force, incident commander for the Route 91 shooting.

Spencer said he goes on every murder scene as the top homicide detective for the LVMPD.

The host asked how are you going to use his years of policing on the City Council.

Spencer responded and said half the cities budget is public safety and you want someone that understands the budget and someone with a public safety background.

Spencer said what makes him successful in the police force is leadership and he leads the national average on solvability within his department.

Spencer is a statesman who knows how to work with people no matter what side of the issue they are on.

Spencer retires from the LVMPD on May 25th.

Public safety is the number one issue for Ward 6.

Spencer said he would like to see a downtown Summerlin type of venue in the Northwest.

The host asked if there would be some type of incentive for homeowners to change from Septic to Sewer to capture the Well water directly to the water treatment facilities.

Spencer said transparency and responsiveness are critical as a city council member.

Click on the link to learn more about Ray Spencer: