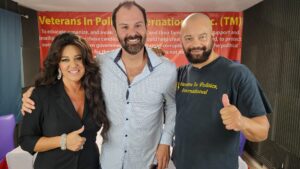 Below are snippets of the one-hour and thirty-five minutes interview. Documents to support each unanswered question asked by the host are presented in the video link above and below this article to Law.

Sanson began by saying he is confused as to why the ‘party’ would support a candidate claiming to be conservative yet during a review of recent behavior, interviews, and news articles quoting Lombardo his own words came back to haunt him?  This self-proclaimed ‘conservative’ appears to act more like a democrat.

The first question fired at Law is; why would Lombardo and his family members give THOUSANDS of dollars (up to the maximum allowable) to Sisolak’s campaign back in 2018 when Sisolak was running for Governor?

Remember at that time Adam Laxalt, Republican candidate for Governor was running against Sisolak yet Lombardo supported the Democrat in this race all the while claiming to be a Republican.

Ironically Lombardo and Laxalt now are on the campaign trail together after receiving former US President Trump’s endorsement.

Speaking of former US President Trump, he came to town a couple of weeks ago to rally for Lombardo and Laxalt.

There was an event held at Treasure Island, yet incredibly it was closed off to the public.

Imagine this…. arguably the most popular President in American history, former President Trump, comes to town to support his endorsed candidates yet these candidates, Lombardo and Laxalt, didn’t seize the opportunity to make this a huge event to draw voters from all over the State.

Many believe it’s because the majority of conservative voters in Nevada do not support Lombardo and Laxalt… they supported Joey Gilbert for Nevada Governor and Sam Brown for US Senate and had those supporters showed up they possibly would have ‘booed’ the Trump-endorsed candidates.

Did they want to save the embarrassment in front of former US President Trump? Probably so.

The second unanswered question which has so many, GOP voters confused regarding this candidate.

Why would Lombardo mandate the vaccine for recruits in the LVMPD?

That is certainly not a Republican thing to do.

Historically conservatives do not go along with or agree with ‘mandates’ for masks and vaccines.

Law said he was not in favor of the vaccine mandates and would never get the COVID vaccine.

Lombardo has since dropped that mandate in recent months, as it probably was not a good look for his campaign.

Lombardo has promised not to raise taxes; however, back in 2015, it was reported Lombardo supported tax increases.

The Republican base is not in favor of higher taxes.

Stephanie Phillips, asked Law; if he judges a man based on his behavior rather than his promises?

Law answered “behavior is a big deal”, and judges more so on behavior than promises.

Unfortunately in this case Lombardo’s behavior and comments do not represent the conservative base values.

More concerning, why Trump would endorse a candidate who has been quoted as saying “there was no widespread voter fraud in the 2020 election and Biden is the duly elected President”, and less than a month after Lombardo was re-elected, he quietly stopped turning over illegal aliens to Immigration & Customs Enforcement (ICE).

How is any of this conservative policy and opinion? … these are things you would see in Democrat policy and speech.

Additionally, Law was asked about why the NVGOP only had one candidate listed in a magazine given out to all the State Convention Delegates as the “recommended” endorsed candidate?

The NVGOP listed only Lombardo as the ‘recommended’ candidate to endorse for the Governor’s race.

Law said he disagreed fully with what happened at that State Convention and he thought “it was the most reckless political decision ever made”.

Sanson said, “you can’t force your opinion on people”.

At the end of the State Convention, the delegates voted to endorse Joey Gilbert for Governor and Sam Brown for US Senate.

Phillips asked Law about his opinion and where the Party should stand on all the election regulations/laws that were reported broken and not followed during the Primary election by the Gilbert legal/campaign team, which now are a part of a lawsuit filed last Friday, July 15, 2022.

Law responded with; he’s looking forward to this evidence being presented as he has only seen ‘what is out there as far as their evidence of wrongdoings and has not sat down with the Gilbert team to review specifically the evidence they have gathered.

Law doesn’t believe they will be successful in a court of law.

Chairman Law calls Gilbert a ‘sore loser’ and claims Gilbert is ‘crying fraud’ because “the election didn’t go his way”.

Law went so far as to say he thought Gilbert’s character was “flawed” because he didn’t “believe there would be a scenario in which Gilbert wouldn’t try making it about him, instead of defeating the Democrats.”

Sanson asked Law if there is another party out there called the “Establishment Party”, Law replies, “there is an alternate point of view, there is a group of people of influence that look at voter trends, and try to manage the outcome from those voter trends”.

Law also says, “Nevada does political business a certain way and the idea there’s an

“Establishmentarian Party” I don’t disagree with”.

Who exactly is it that decides who the “prize endorsed candidate” is?

In closing, the base is confused as to why Lombardo would be lifted up by Trump and the ‘party’ since his opinions, policies, and behavior go along with some Democrat-like policies and beliefs rather than Constitutional conservative values.

The “Establishment Party” is alive and well in Nevada.  When the establishment gets in the way of the true Conservative Party, it creates a divide.

Either we STOP and FIX the election process or we will never have a fair election again.

Joey Gilbert’s team is the only one fighting this in court at the moment.

Gilbert is fighting for ALL Nevadans.

Like it or not, this is where it starts and ends…. “with our election process”.

Please watch this powerful interview Below:

William “Bill” Gonzalez checkered Past on the Bench ignores Veterans Rights!Candidate for Nevada Governor, Joey Gilbert, is not conceding. Gilbert has filed a lawsuit contesting the election.