All candidates were invited to attend this process. This process is on Facebook Live. The questions by the panel are not known by anyone until it’s asked of the candidates. Because you show up for our endorsement is not an automatic win.

Our endorsements are not for sale. You have to earn it!

Our organization has the most transparent interview process in the state of Nevada.

Our Veteran organization is registered with the Nevada Secretary of State and the Internal Revenue Service, we are not a Facebook group page or a Political Action Committee. Our organization has been in existence since 1992.

Once we endorse we stick with the candidates to help promote them in any possible way we can.

We believe that our endorsements represent the people of this great state and community.

Veterans In Politics International is extremely critical of our judicial candidates, the reason for this careful criticism is because a judge’s decision affects your life immediately and on a very personal level.

Our organization believes that a judicial candidate that wants to be elected should undergo a careful psychiatric evaluation and be available to the public.

In the appointment process judicial candidate’s psychiatric background and complete life, and history is scrutinized by the Judicial Selection Committee, so we don’t see any reason why this process should not be applied to the elections.

The Veterans In Politics International ask tough questions because we need to know.

This is why many candidates are intimidated from appearing in a live interview. Our saying goes if you can’t handle our group you should not be elected.

Once a judicial candidate becomes a judge it is almost impossible to remove that judge because judges are the only elected body that can not be recalled, they are no term limits for judges, and judges have judicial immunity.

Many would say that The Nevada Commission on Judicial Discipline is the buffer between the community and a judge. But that’s far from the truth this organization picked and chose who they would go after because of influence and friendship.

This buffer is far from being fair to the community to remove a bad judge.

Some would say the ballot box is the best way to remove judges. But when judges intimidate lawyers and when lawyers have to appear before these judges many would rather have a bad judge on the bench than lose their case because of a revengeful judge.

So it becomes impossible to remove a bad judge.

Why because many of them run unopposed or put family members in the race to take votes away from serious contenders.

This and many reasons are why Veterans In Politics International has risen to make sure that when we endorse a judicial candidate that person would serve our community with the highest regard.

It gives us great pleasure to say the following:

Both candidates will serve Nevada with honor and distinction.

Please watch the videos of our endorsement interview and decide for yourself: 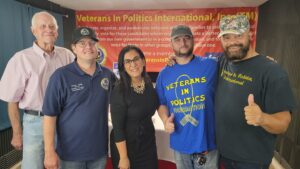 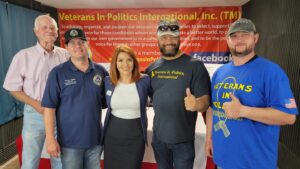 The Media Covered up the story on the Clark County Public Administrator’s Domestic Violence!James Dean Leavitt was Charged with a Felony Hit and Run and Lost his Driver’s license for one year and now he wants to be your Las Vegas Justice of the Peace!