The article was written BY

On December 29, 2022, the Nevada Supreme Court released an opinion on the Mack v Williams case that essentially ended qualified immunity in Nevada. In a landmark decision, possibly one of the most impactful in Nevada’s history, the justices upheld the long-standing legal principle that a right does not, as a practical matter, exist without any remedy for its enforcement. 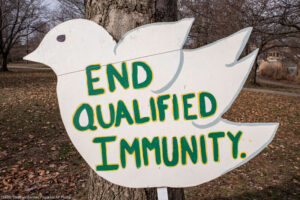 In layman’s terms: You can sue public employees when your state’s constitutional rights have been violated.

The implications are far-reaching and the number of lives that will be changed is untold. What we do know, however, is no one is talking about it. Sure, lawyers, public officials, and elected officials are talking about it…but behind closed doors.

Go search the social media pages of many state politicians, especially ones who love to sell you that they’re ‘bout that “justice” and “accountability”. I’ll wait. You won’t find it. Sure, a few news channels in northern Nevada published short articles on it and the Review-Journal published a more lengthy article on it with actual quotes from the lawyers involved. However, it’s nothing near what I’d expect from such an impactful decision.

They Don’t Want You To Know About It

See, this decision opens up pandora’s box for every single rights violation by a public employee in Nevada. Law enforcement officers, teachers, judges, district attorneys, DMV workers…every single person employed by the government in Nevada in any way.

To put this in perspective; before Dec 29th, 2022 if you had been assaulted by a police officer, your child assaulted by a teacher, or any public worker violated your rights you most likely wouldn’t have been successful in a lawsuit.

Now because of this decision…you can.

While the Mack decision is only regarding illegal search-and-seizures, the willingness of the high court to recognize that a right does not exist without a remedy for its enforcement can (and will) be used in non-search-and-seizure cases.

So yeah, public agents of the state don’t want you to know about this. They don’t want you to know what your rights are, because it empowers you to be less controlled by them. They realize this creates a massive level of accountability for all of them, and they’re scrambling to understand what impact it has fully.

One thing I do know via whispers around the state, our elected officials are already strategizing how to break it down in this year’s legislative session. Along with finding more ways to take your hard-earned income, they’ll be crafting ways to skirt this ruling. I’ll be in Carson City sniffing all of it out, FYI.

The Story Will Be Told

The story of the high court’s decision and the impact it has aside, there are incredibly interesting parallel stories involved. There’s the story of a woman whose life changed when she was ordered to remove all her clothing to be strip-searched at High Desert State Prison while attempting to visit her boyfriend. The story of how she got there in the first place, catching a ride with a stranger. The story of the motorcycle-riding, whiskey-drinking attorneys who took her case to the Nevada Supreme Court. Who, by the way, has made careers fighting for veterans, prison inmates, and civil rights violations.

One lawyer ran for Attorney General once, one argued in front of the Supreme Court to give prisoners minimum wage, and one hired a paralegal that spent over 20 years in prison. You can’t make this stuff up, it’s lore like this that our crazy state is known for. There’s much more, all of which will be in a feature documentary coming out soon.

I’ve been following this case since before the oral arguments were given at the Supreme Court and have had a vested interest in seeing Qualified Immunity ended in our state for many years. I campaigned on it in my run for Governor in 2022. So, I’m doing a documentary to tell this story along with my friend and videographer/creative artist Kurt Murray. The documentary will be released by the Free Nevada Foundation, a nonprofit that I’ll tell you more about later.

That’s about where I’ll leave it, for now. I’ll be writing updates on the project in the coming days here in this community and sharing some things on social media. The story must be told. It’s important Nevadans know what their government is capable of, and how good people are fighting it. Stay tuned.

This quote is highly relevant to this story and in light of his recent birthday, I’ll leave you with this: