You are here: Home / Endorsement Interviews / US Senate Candidate is ‘ready to rumble’ and gets heated during VIPI interview! 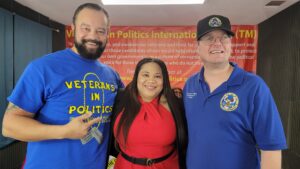 Kennedy is a mother to six children, married to an attorney and Kennedy earned her law degree in 2014 from the State of California.

Kennedy used her legal experience to defend several businesses that were shut down during Covid.  She fought on their behalf to keep their doors and gun store doors open during Covid.  Kennedy is a self-proclaimed “high-powered attorney” and “well-known in California”.

Kennedy was in familiar territory during this interview as she used to be a co-host on the VIPI talk show many years ago; however, it got pretty intense.

Kennedy seemed agitated at times during the interview as the atmosphere got quite combative.  There were heated exchanges between her and the host Steve Sanson.

Kennedy resorted to foul language occasionally to drill down her points.

A large portion of the interview focused on her ‘connection’ to Nevada, how long she’s actually lived in Nevada, and the multiple failed campaigns ran in California.

Sanson asked if she had won her congressional election against Adam Schiff would she be back in Nevada?  She answered, “Why the hell would I win a seat against Adam Schiff and then walk away”?  We would assume Kennedy would have fulfilled her term had she won that seat, and not moved back to Nevada, which she claims is her home after being absent for 12 years.

Sanson drilled down even further and asked Kennedy about Nevada being her ‘home’ since she was born and raised in Wisconsin and didn’t move to Nevada until she was “27 or 28”.  Kennedy lived in Nevada for 10 years (2000-2010) before moving to California for 12 years (2010-2022) and then just moved back four months ago; however, Kennedy claims to have “lived in Nevada most of her adult life”.

Kennedy said she moved to California for “a better life for her children”, to also go to law school where she obtained her law license in 2014, and also for fertility options she didn’t have in Nevada.

Kennedy was asked why she moved back to Nevada and she replied “protect her children”.  California is going to “forced vaccination for children” where CPS could potentially come knocking on your door if you don’t subject your kids to the Covid vaccine.

After all the discussion of Kennedy having just moved back to Vegas in September of 2022, then filing for candidacy for US Senate in November of 2022, Sanson asked what she says to people who would label her as a “carpetbagger”?

Kennedy responded by saying she doesn’t give a “sh*t” what people say about him… “carpetbagger is a racist term” says Kennedy.  She says she’s a direct descendent of slaves and is offended by the term. Here is the actual definition of carpetbagger:

a political candidate who seeks an election in an area where they have no local connections.

Speaking of race, Sanson asks Kennedy if she thinks her race and gender are going to get her over the finish line.  Kennedy responds that “people are going to vote for me because I am Ronda Kennedy and I get sh*t done…. And I don’t think that is going to be a deciding factor”.

Kennedy also says “this Red State should do more to recruit blacks and minorities to the Republican Party”.  She believes there is a recruitment problem in the Nevada Republican Party and that’s why there aren’t a lot of people of color in the party.

After Sanson asked co-host, Jim Jonas, to name how many black female Republican elected officials there are in the State, none were mentioned then Kennedy says “well I have a lot of the west side people”. She claims to have the west side of Las Vegas and the Tahoe area “locked up”.  She didn’t provide any data to prove her claims.

Sanson says do you really think you’re going to make it out of the primary with all of them being white people?  Kennedy says “I don’t give a sh*t what color they are”.  Kennedy states she believes she’d “be a slave today if the Democrats won”.

When asked if she got the Covid vaccine she said “hell no”.  “My body my choice”.  Kennedy believes the government should not be telling people what to do with their bodies.

Kennedy believes in a secure border. She believes China is responsible for the fentanyl coming across the border and Mexico is the gateway for the world to come into the United States.

Sanson asked her what her draft legislation would say to secure the border.  Kennedy said “that’s an impossible question”….” first of all I’m not just some green-nose person just trying to get elected”…. “I wouldn’t just say anything…. That’s an idiotic answer (think she meant a question) to even say what you would do because you have no idea”.

“I have no idea what needs to be done to secure the border” Kennedy explains due to not being privy to information as would have an elected official.

Kennedy was asked if she believed we have election fraud in this Country.  Yes, she thinks there is fraud all over the Country and believes mail-in ballots are unconstitutional.

When asked Kennedy stated she believes eliminating the Keystone Pipeline was a mistake by the Biden Administration.  She believes its policy that is the problem and why our gas prices are so high.  She thinks President Trump had it right when it comes to America being energy independent.  She also believes manufacturing should be brought back to the US.

Kennedy was asked her opinion about the Black Lives Matter organization and she stated she never supported it because “the leaders of the organization were opportunists”.

Sanson asked Kennedy after living in California for the last 12 years and now back in Nevada for four months, what she has vested in this State…….

Sanson pushed further and asked do you have land here, a small business… what do you have vested in this State, asked Sanson.

After some bickering back and forth about how the question was asked and what was the meaning of the question, Kennedy pushed back and said she was trying to understand the question.

Sanson says when some found out Kennedy was running he got a few phone calls (and Kennedy doesn’t like the term carpetbagger) but people want to know what you have vested in this State, Sanson asked again.

Kennedy answered, “figure out the office you want to run for and what that office does because it’s not about Nevada, it’s about the United States of America….. I’m running for a statewide office that will affect the Nation”.

Sanson replies “the Nation ain’t voting for you, Nevada is”.

Kennedy fires back and says Nevada should vote for her based on what she can do when she gets to Washington.  She goes on further to say she doesn’t like this “click-ish thing where people say they’ve lived here 30 years… I’ve spent all my life here…. then Kennedy says “well what the hell have you been doing the last 30 years and when you get to Washington you won’t know what the F*ck to do because you don’t know what the office does”.  She said how she votes in the Senate will affect every State – not just ours.

It seemed to go a little off the rails at this point.  The question was “what do you have vested in this State” then Kennedy went on a rant about people not knowing about what office they were running for, etcetera, instead of answering the question.  She seemed irritated and rattled at this point.

Next Sanson asks Kennedy what bills she would sponsor as a Senator representing the State of Nevada.  Kennedy appears to roll her eyes and says that’s such a broad question and says it’s ambiguous.  After a back and forth between her and Sanson, she finally says she would support veterans and also introduce a bill about overhauling the FHA to afford more people the ability to buy homes.

Sanson goes back to the issue previously brought up that Kennedy claims if she is elected to the Senate from Nevada that she would be representing all of the Country.

Sanson says none of the other States are going to vote for you – only Nevada.

Sanson asks her what is important to Nevadans – do you know?  Kennedy starts off by inferring politicians’ answers are “bullsh*t” catch-all answers and you really can’t make a generalization.  She believes what’s important to one may not be important to all.

Sanson says I can tell you what’s important to Nevada because “I’ve been here a minute”.  Kennedy fires back well when was the last time you were on the “west side near MLK I was just there last week”.  Sanson says homeless issues, crime, and the economy are what Nevada is concerned with and said this was also discussed with a North Las Vegas City Council member.

Kennedy scoffs at that and says well that’s a politician and they’re probably out of touch with the voters.  Kennedy says she hopes someone wouldn’t take her word for it (as a politician) but would ask the people.  Aren’t politicians (elected officials) supposed to know what their constituents’ biggest issues are?

Kennedy says well you’re generalizing, but she does not believe those to be issues of Nevadans.  She says she can’t say what’s important to Nevadans because everyone is different and says crime isn’t the real issue of the ‘west side’.  The west side’s issues are not a crime, but jobs and the economy Kennedy explains.

Sanson says I’m just trying to ask you what’s important to Nevadans from all the way up in Washoe County to Clark County, you don’t know do you he says.

Kennedy said she didn’t know but she said she knows what “should” be important to Nevadans.  She says the economy is the number one issue, people recovering from Covid and there are no more lockdowns. Human trafficking was another of her issues and equal opportunity for minority-owned businesses as she explained how minority-owned businesses were not used to build the Raider Stadium.

Jim Jonas asked one final question about term limits and Kennedy states she agrees with term limits and two terms would be the most she plans to hold office if so elected.

Kennedy welcomes the ‘rumble’ to begin and throughout the interview displayed a somewhat combative and argumentative attitude.  Maybe it was because she was in ‘familiar’ company, but nonetheless, voters will decide in the end if they think this newcomer back to Vegas will represent their best interests.

Hopefully, during the next 18 months, she will figure out what is important to Nevadans.