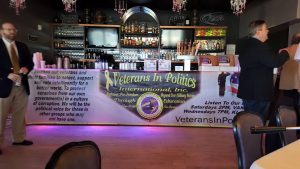 (VIPI) Veterans In Politics International, we will conduct our Endorsement Interviews for; United States Senate, Congress District 4, Nevada State Governor, and Lieutenant Governor and the location will be Lakeside Business Suites in Desert Shores (https://lakesuites.com/ ) on Saturday, March 31, 2018.

VIPI takes pride in transparency. All interviews are filmed and published ‘as is’ to a public YouTube page in addition to www.VeteransInPolitics.org and also on several social media pages.

All candidates for the federal and constitution seats have been invited to participate.

Below is a schedule for each seat that will be interviewed.

The Veterans In Politics International takes great pride in educating the public on each candidate running for elected office.

We never “rubber stamp” a candidate, all endorsements are “earned”.

Come out and support your favorite candidate and educate yourself on the candidates running to be your next elected representative.

The moderator for this event is Robert Kurth candidate for Las Vegas Justice of the Peace Department 15.

17 Candidates that will be in Attendance:

We would like to thank the following for helping to make this year’s endorsements possible; 7 days of interviews: