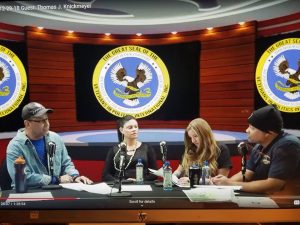 On December 29, 2018 Thomas James Knickmeyer former Clark County Marshal that served in both Family Court and the Regional Justice Center for 20 years dropped a shocking bombshell of cover-ups, sex, and embezzlement of both elected and administrative staff.

Knickmeyer explained that Grierson embezzled $200,000 of county money and used it for a private counseling business that he owned.

Knickmeyer continued by saying the Judges knew about this theft, but chose to ignore it because they didn’t want negative attention focused on the court.

In the interview Knickmeyer stated that Grierson hacked into the judges emails and had dirt on them, which would protect him from any repercussion.

We have done a series of interviews with Thomas James Knickmeyer 02/17/18, 11/17/18 and 12//29/18 but the last interview was more damaging to the reputation of the Eighth Judicial District Court.

A Grand Jury Investigation is needed.

Two Clark County Family Court Judges should be REMOVED from the bench NOT promoted!!