Attorney General of the State of Nevada

Office of the Attorney General

I believe that on or about June 5, 2019, the Board of Trustees of the Clark County School District went into a closed session at the request of Superintendent Jesus Jara for the express purpose of authorizing him to eliminate the position of Dean of Students in all secondary schools.

This meeting was not for the purpose of giving direction in collective bargaining to district representatives, but rather to authorize the superintendent to unilaterally act to eliminate the position of Dean of Students in all secondary schools, subsequently, the superintendent did just that.

If true, this is a flagrant and deliberate violation of the Open Meeting Law. Contrary to the law which requires public bodies to deliberate and/or take action in public, these trustees did so behind closed doors with the public excluded.

They voted 5-2, with trustees Garvey and Young opposed, to allow Superintendent Jara to take unilateral action.

I ask that you investigate this matter, obtain the tape of the meeting and, if found to be true, void the action, sanction the offending trustees, prosecute them and release a copy of the tape so that the public can have full transparency.

If this action is proven to be true, this would also be an outrageous conspiracy between elected board members and the superintendent in an effort to violate the law. 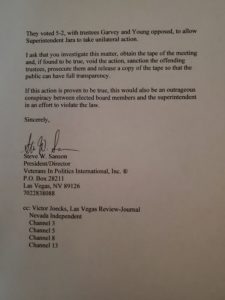