You are here: Home / Home - Featured / Judge has a history of violence & black robe syndrome! 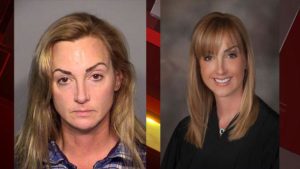 (VIPI) Veterans In Politics International, Inc. has investigated Clark County District Court Judge Stefany Miley and her Deputy Marshal Jason Dean for several months and what we found out would make any Clark County voter throw their hands up and say “What is going on with our judiciary?”

Our judiciary for many years has a total lack of transparency when it comes to administrative discipline. This is the reason why voters are uneducated on this subject and we continuously keep electing the same people to represent us or their seat goes unchallenged.

After we filed a Freedom of Information Request we found out that Judge Miley has four separate police reports from harassment to violence. In addition, to that, she is allowed to get away with it time after time and this gave her a Teflon mindset which caused her to develop black robe syndrome.

Judge Miley is not totally to be blamed for it, the system has failed her and the voters. Judge Miley faced no disciplinary actions for her behavior no recommendation for her to take a mental evaluation. If you take a look at her behavior its clear there is a pattern of violence that seems to be escalating rapidly (please see pattern below). 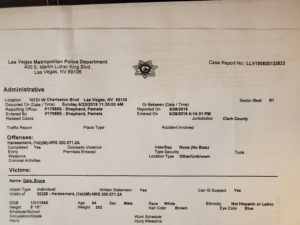 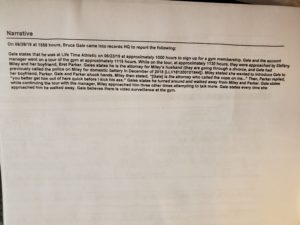 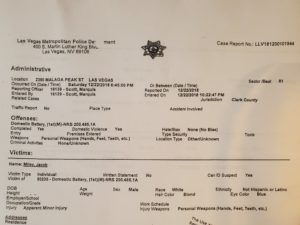 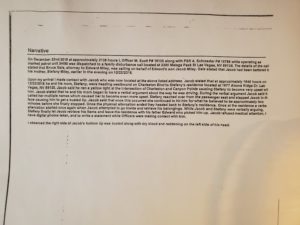 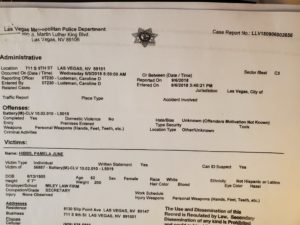 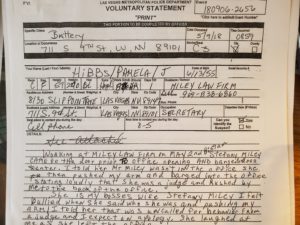 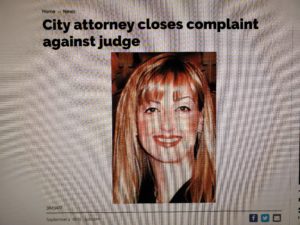 On June 28, 2019, at 1130AM; Bruce Gale indicated that he was threatened by Judge Stefany Miley’s boyfriend Bret Parker after Judge Miley introduced them at the Life Time Athletic Club. Miley condoned the actions of her boyfriend to kick Bruce Gale’s ass and then she repeatedly harassed Gale until he left the club. A violation of NRS 200.571 and 200.575.

Judge Miley have that much time on her hands, which she can go to lunch and drive from Downtown Las Vegas to Summerlin to workout with her boyfriend and return back to the courthouse? How long has Judge Miley been doing this? Is this the reason why her afternoon calendar is dark, especially on Friday’s?

On December 22, 2018 at 9:38PM; Judge Miley punched and slapped her son Jacob Miley causing him to have a busted lip while he was operating a motor vehicle with Judge Miley’s 8-year-old child sitting in the rear of the vehicle (see article “District Judge Stefany Miley arrested on Domestic Violence charge” https://www.reviewjournal.com/crime/district-judge-stefany-miley-arrested-on-domestic-violence-charge-1559291/ ). Why wasn’t Child Protective Services involved?

On May 19, 2018, at 8:59 AM; Pamela Hibbs indicated that while she was working for Edward Mileys Law Firm, Judge Miley forced her way into his office physically pushing her and told her to “Get out of my way, I’m a Judge”.

On May 19, 2009, Rhonda Gold-Charbonneau filed a battery charge on Judge Miley for deliberately bumping into her with a clenched fist at a child’s soccer game. (See article “City attorney closes complaint against judge” https://www.reviewjournal.com/news/city-attorney-closes-complaint-against-judge/ ).

We have laws in place that is supposed to protect all citizens from this type of behavior, do these same laws only apply to the poor and destitute to follow or is it written for everyone no matter how prestigious they think they are?

A Judge is held to a higher standard they have to follow all laws on and off the bench including the Nevada Code of Judicial Conduct amended by the Nevada Supreme Court every year.

Judge Miley’s actions are unbecoming of a Judicial Officer and she has violated her own judicial canons (see canons below).

A judge shall uphold and promote the independence, integrity, and impartiality of the judiciary and shall avoid impropriety and the appearance of impropriety.

Rule 1.1. Compliance with the Law. A judge shall comply with the law, including the Code of Judicial Conduct.

Rule 1.2. Promoting Confidence in the Judiciary. A judge shall act at all times in a manner that promotes public confidence in the independence, integrity, and impartiality of the judiciary and shall avoid impropriety and the appearance of impropriety.

[1] Public confidence in the judiciary is eroded by improper conduct and conduct that creates the appearance of impropriety. This principle applies to both the professional and personal conduct of a judge.

[2] A judge should expect to be the subject of public scrutiny that might be viewed as burdensome if applied to other citizens and must accept the restrictions imposed by the Code.

[3] Conduct that compromises or appears to compromise the independence, integrity, and impartiality of a judge undermines public confidence in the judiciary. Because it is not practicable to list all such conduct, the Rule is necessarily cast in general terms.

[4] Judges should participate in activities that promote ethical conduct among judges and lawyers, support professionalism within the judiciary and the legal profession and promote access to justice for all.

[5] Actual improprieties include violations of law, court rules, or provisions of this Code. The test for appearance of impropriety is whether the conduct would create in reasonable minds a perception that the judge violated this Code or engaged in other conduct that reflects adversely on the judge’s honesty, impartiality, temperament, or fitness to serve as a judge. Ordinarily, judicial discipline will not be premised upon the appearance of impropriety alone, but must also involve the violation of another portion of the Code as well.

[6] A judge should initiate and participate in community outreach activities for the purpose of promoting public understanding of and confidence in the administration of justice. In conducting such activities, the judge must act in a manner consistent with this Code.

Rule 1.3. Avoiding Abuse of the Prestige of Judicial Office. A judge shall not abuse the prestige of judicial office to advance the personal or economic interests of the judge or others or allow others to do so.

[2] A judge may provide a reference or recommendation for an individual based upon the judge’s personal knowledge. The judge may use official letterhead if the judge indicates that the reference is personal and if there is no likelihood that the use of the letterhead would reasonably be perceived as an attempt to exert pressure by reason of the judicial office.

[3] Judges may participate in the process of judicial selection by cooperating with appointing authorities and screening committees, and by responding to inquiries from such entities concerning the professional qualifications of a person being considered for judicial office or by submitting on official letterhead letters to such entities endorsing or opposing the person.

[4] Special considerations arise when judges write or contribute to publications of for-profit entities, whether related or unrelated to the law. A judge should not permit anyone associated with the publication of such materials to exploit the judge’s office in a manner that violates this Rule or other applicable law. In contracts for publication of a judge’s writing, the judge should retain sufficient control over the advertising to avoid such exploitation.

(A) A judge shall perform the duties of judicial office, including administrative duties, without bias or prejudice.

(B) A judge shall not, in the performance of judicial duties, by words or conduct manifest bias or prejudice, or engage in harassment, including but not limited to bias, prejudice, or harassment based upon race, sex, gender, religion, national origin, ethnicity, disability, age, sexual orientation, marital status, socioeconomic status, or political affiliation, and shall not permit court staff, court officials, or others subject to the judge’s direction and control to do so.

(C) A judge shall require lawyers in proceedings before the court to refrain from manifesting bias or prejudice, or engaging in harassment, based upon attributes including, but not limited to, race, sex, gender, religion, national origin, ethnicity, disability, age, sexual orientation, marital status, socioeconomic status, or political affiliation, against parties, witnesses, lawyers, or others.

(D) The restrictions of paragraphs (B) and (C) do not preclude judges or lawyers from making legitimate reference to the listed factors, or similar factors when they are relevant to an issue in a proceeding.

[1] A judge who manifests bias or prejudice in a proceeding impairs the fairness of the proceeding and brings the judiciary into disrepute.

[2] Examples of manifestations of bias or prejudice include but are not limited to epithets; slurs; demeaning nicknames; negative stereotyping; attempted humor based upon stereotypes; threatening, intimidating, or hostile acts; suggestions of connections between race, ethnicity, or nationality and crime; and irrelevant references to personal characteristics. Even facial expressions and body language can convey to parties and lawyers in the proceeding, jurors, the media, and others an appearance of bias or prejudice. A judge must avoid conduct that may reasonably be perceived as prejudiced or biased.

[3] Harassment, as referred to in paragraphs (B) and (C), is verbal or physical conduct that denigrates or shows hostility or aversion toward a person on bases such as race, sex, gender, religion, national origin, ethnicity, disability, age, sexual orientation, marital status, socioeconomic status, or political affiliation.

[4] Sexual harassment includes but is not limited to sexual advances, requests for sexual favors, and other verbal or physical conduct of a sexual nature that is unwelcome.