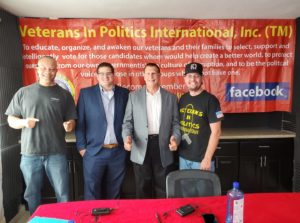 Anthony “Tony” Palmer was born in 1958 in New York City and lived there for 27 years. He graduated from City College of NY in 1981 with a BA in American History. While there, he competed in wrestling, powerlifting, and track & field. Tony joined the Virginia Beach Police Department in 1985 where he was promoted to Sergeant in 2007. In 2010 he graduated from the West Point Leadership program. He retired from the police department in 2015 after spending 30 years as an officer. Tony and his wife currently reside in Las Vegas.

Tony is a conservative Republican who is pro-life, pro-2nd amendment, and supports President Trump. As your assemblyman he will:

WHY AM I RUNNING

Putting My Experience
to Work

I’m running for U.S. Congress because we have some fundamental problems in our society.  I believe that our government plays a role and has responsibility for addressing these issues.  As an elected official, it is my duty to speak up for the people and act in their best interests.  My goal will be to address the present issues that are impacting Nevada residents and future challenges our country will face.

COVID-19 will change our world forever in terms of communication with viruses and diseases, cleanliness of public places, Medical facilities being equipped, where we buy our medical resources from, and worker’s rights.  This campaign is not about who is at fault, it is about growing and becoming better. We do not need to blame China for the lack of information, but for encouraging that the World Health Organization is included in all future viruses and disease outbreaks.

One thing that has truly opened my eyes throughout this pandemic is the lack of worker’s rights.  Here in Las Vegas and all across the United States people were let go with no notice or little warning.  Yes, there were several companies like the Wynn Casino that said that all of their employees will be paid throughout this emergency situation, but you had other companies who just let everyone go.  These are not small companies either, these are companies that had record profits in 2019.  Their actions caused stress to the everyday person and to the government.  Our government stepped up during this time to calm the financial stress on all Americans.  Workers are human beings that keep our country running, they should have a strong and equal voice in these businesses.

The following issues are what made me put my name on the ballot during this election cycle.  I will do everything in my power to implement term limits on the federal level, a single-payer health care system, and to bring our education system into the 21st century.  This will not be easy to get done, but I promise you right now that by the time I get done in Washington DC these goals will be met or we will be a lot closer.

When I talk about implementing term limits it is to address multiple issues. The first issue is corruption if we take out career politicians on the federal level corporations will have to pay larger amounts of money to more people and not have the same influence they have with someone that has been in that office for 30 years.  People are elected into office with almost zero dollars to their name and within ten years they are millionaires.  Politicians are elected to serve the people, not the people who write them checks.

Term limits will also increase the number of participants running for these offices.  One person won’t hold a seat for 15 years, people won’t be getting into politics to say I’m going to make this my career job.  This is not a new idea, in 1995 term limits on the federal level were voted on but fell short.  It is no longer 1995 and I believe the American people would like to see new faces in their government system.

The health care system in the United States is a mess.  My wife and I had to visit the emergency room multiple times in August 2019 due to a medical emergency and the fees were outrageous.  My wife and I have insurance through the school district, but the insurance company only covers so much. The hospital billed twelve thousand dollars for just going to the facility.  We then received five other bills from doctors who were working in the emergency room, but my insurance didn’t cover them because they weren’t part of my insurance coverage.  One doctor bill was over fifteen hundred dollars, this doctor maybe talked to my wife and I for three minutes. They may have looked at the ultrasound for ten minutes with the other doctors. What I am getting at is who can really afford health care?

Health Care in the 21st century will become a human right.  Why wait till the end of this century, let’s do it now.  A single-payer health care system will save people money.  We have the means and the ability to make healthcare a right, we just have to be brave enough and open to new ideas.  People say the health industry will be a big mess and fail. To those people, I say let’s work together to make it better because the system now is not working for everyone and we can do better.

Our Public Education System is the best in the world.  We have major issues and they are not going to disappear without major reform.  I have been an educator for the past eight years in the classroom, in the schools that need the most help.  A teacher shortage is here and it is growing, if we do nothing to address this issue the consequences will be felt for many generations.  Times have changed and so does our education system. We have to reevaluate what is our true purpose of the education system and implement change.

These are the reasons why I am getting involved in politics.  No matter what happens during this election, I will not stop my fight to address these changes.  I am tired of voting for people who say they are going to do something and then they completely do something else when they are in office.  I have no special interest group that I am running for, I am simply running to help make the lives of everyday people better.

“A right not exercised is a right lost!”

THE COUNTDOWN to SUPER TUESDAY is ON!!