You are here: Home / Endorsement Interviews / Todd Leventhal – Taking Up Space on the Ballot

This is the story of Todd Leventhal, a candidate for Clark County Judge, Dept. 6.  But we’re just wondering—why is Todd Leventhal taking up space on the ballot.  Clearly, Leventhal is not “in it” to “win it.” 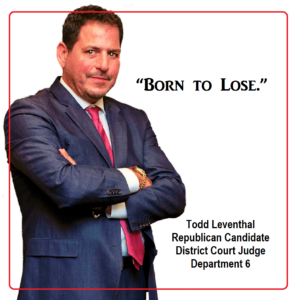 It’s the same old story—a candidate who defrauds the public by pretending to make an effort running for judge.  We presume that this candidate’s presence in the race is the handiwork of one, Tom Letizia—a “political” consultant for candidates running in “non-political” election contests.

But this begs the question; what does a “political” consultant do for candidates running in “non-political” races?

Okay, so what do we know about Todd Leventhal?  Well, back in 2016, Leventhal received a public reprimand from the Southern Nevada Disciplinary Board.

Leventhal had represented a client charged with four counts of drug possession.  The client paid $400 in cash along with a jet ski and trailer.

Leventhal advised the client that he’d be working with Mark Zane of Zane Investigations for investigative services.

Leventhal represented the client at the preliminary hearing and then advised the client that he could no longer represent her without additional compensation.  Leventhal and the client then entered into a “Flat Fee Retainer Agreement,” with a fixed flat fee of $125,000.

The Agreement stated that the fee was “non-refundable.”  Leventhal prepared a Quit Claim Deed for the client’s residence.  The residence was given to two corporations in which Leventhal and Mark Zane (Zane Investigations) had interests.

Leventhal then represented the client at subsequent hearings.

Zane then instituted eviction proceedings against the client—to evict the client from the home.

Ultimately, the Southern Nevada Disciplinary Board found that the “non-refundable” fee agreement and deed transfer did NOT comply with the Rule of Professional Conduct.

The Board also found that Leventhal created a conflict of interest with his own client by using Zane to evict the client from her home.

The Board further found that, by putting Zane’s name on the deed, Leventhal had improperly shared “fees” with a non-lawyer.

For his misconduct, Leventhal was Publicly reprimanded.  The Board also ordered that Leventhal prepare a deed transferring full title of the property back to the client.

Veterans In Politics International (VIPI) does not recommend Leventhal for “judge”.  Leventhal is an unscrupulous attorney who has no regard for his own clients.  When attorneys get caught doing outrageous things as Leventhal did, it makes you wonder how many times they got away with misconduct that went unreported.

Leventhal defrauds the public.  If folks actually vote for Leventhal, their votes will not count.  Why?—because Leventhal is not trying to win.

Leventhal is in the race for one purpose—to deliberately lose—to ensure the incumbent coasts to a smooth election.  A pall of corruption now hangs over Clark County Courts—where incumbents and campaign managers work with loser attorneys to rig elections.  Until we halt this practice, there can be no justice in Clark County, Nevada.